Nav in a nutshell: Lee bowing defined - Practical Boat Owner. Dick Everitt explains how you can get a little lift from the tide If our destination is directly to windward we’ll have to tack towards it. 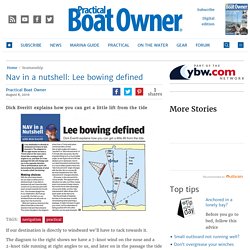 The diagram to the right shows we have a 7-knot wind on the nose and a 2-knot tide running at right angles to us, and later on in the passage the tide will change and run in the opposite direction. This is all theoretical, but it will demonstrate the principle of what is usually called ‘lee bowing’. Making choices With the wind dead ahead, we can start on either port or starboard tack.

How air mass affects wind direction – Yachting World. For each wind direction we can determine where the source region is and therefore its likely characteristics, says meteorologist Tibbs I have a lovely old instrument at home which belonged to my grandfather; using dials on concentric circles you can set the direction of the wind, barometer reading and trend, along with the season. 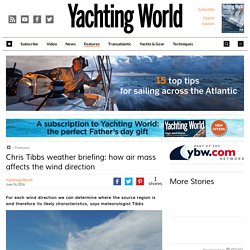 This then gives a basic weather forecast by identifying the air mass and what is likely to happen next, similar to the forecasts found on home weather stations. So what is an air mass? If you go vertically up through the atmosphere you will get some big changes in temperature, humidity and wind over a short distance. However, if you move horizontally through the air you will find that the air’s characteristics will stay very similar often for hundreds of miles. As the air is heated, or cooled from below, the temperature of the air becomes close to that of the surface it is crossing. Tropical maritime Identifying the type of wind. 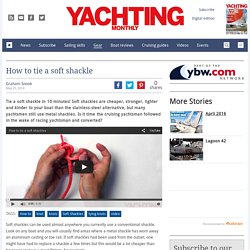 Soft shackles are cheaper, stronger, lighter and kinder to your boat than the stainless-steel alternative, but many yachtsmen still use metal shackles. Is it time the cruising yachtsman followed in the wake of racing yachtsman and converted? Soft shackles can be used almost anywhere you currently use a conventional shackle. Look on any boat and you will usually find areas where a metal shackle has worn away an aluminium casting or toe rail. 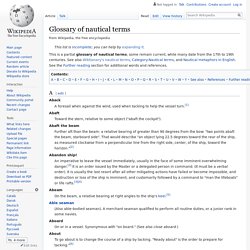 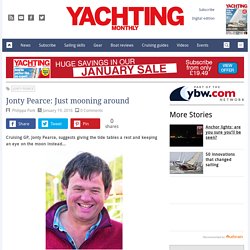 The sun was shining on the sea,Shining with all his might:He did his very best to makeThe billows smooth and bright–And this was odd, because it wasThe middle of the night. The moon was shining sulkily,Because she thought the sunHad got no business to be thereAfter the day was done–“It’s very rude of him,” she said,“To come and spoil the fun! – Lewis Carroll. Yachting Articles : On too long a lead: how your lifejacket harness could kill you - Yachting World. Rudder failure and 1,500 miles to sail – Yachting World. When the rudder of his 39-footer broke in mid-Atlantic Patrick Marshall set up a jury rig, with the support and advice of a radio net, and sailed 1,500 miles to the Caribbean Like most dinghy sailors, I used to have fun sailing my boat without a rudder. 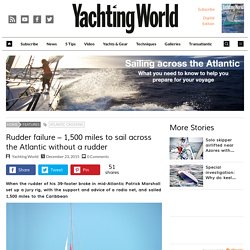 I learned a lot about the optimum set of the sails, heel and fore and aft trim in order to keep a straight course. Doing it for real in a 39ft yacht weighing 9 tons after rudder failure in mid-Atlantic at night with a Force 7 blowing was a different matter. Amanda and I left Mindelo in the Cape Verde Islands at 1500 on Tuesday 6 December 2011 on our Sweden Yachts 390 Egret. We shot through the acceleration zone between São Vicente and Santo Antão in 30 knots of wind, and continued 50 miles south to avoid the islands’ huge wind shadow before turning west. By midday the next morning we were heading direct for Barbados, 1,950 nautical miles away, with full main and the cruising chute set under a blue sky with just a few puffy clouds. Skipper’s tips – Look abeam. Tom Cunliffe has assessed hundreds of sailors for the RYA Yachtmaster exam. 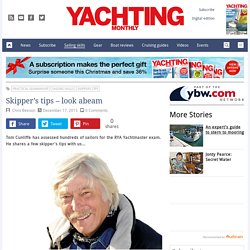 He shares a few skipper's tips with us... An expert’s guide to stern to mooring. If you charter in the Med, you’ll find yourself mooring stern to. 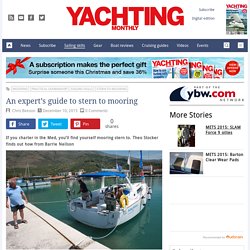 Theo Stocker finds out how from Barrie Neilson An expert’s guide to stern to mooring Coming alongside at the end of the day in the UK usually means picking up a mooring or some form of parallel parking against a floating dock. How to Get Kids to Love Sailing >> Scuttlebutt Sailing News. When Farr 40 pro, Dave Gerber, hears this topic discussed, he gets really excited. 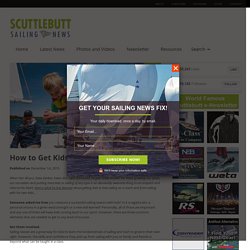 For Dave, growing our sport, our recreation and putting more kids in sailing of any type is an absolutely awesome thing to accomplish and close to his heart. Here is what he has learned about getting kids to love sailing as a coach and from sailing with his own kids… Someone asked me how you measure a successful sailing season with kids? Is it a regatta win, a personal victory in a given wind strength or a new skill learned? Personally, all of those are important and any one of them will keep kids coming back to our sport. Get them involved. Island Hopping: The Joy of Sailing in Greece. PHOTO: The clock tower rises over the marina on Hydra, Greece. 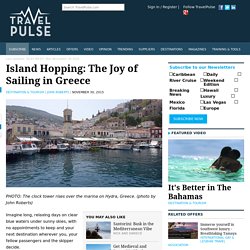 (photo by John Roberts) Imagine long, relaxing days on clear blue waters under sunny skies, with no appointments to keep and your next destination wherever you, your fellow passengers and the skipper decide. My voyage on a 50-foot yacht sailing in the Greek isles delivered all I had anticipated — and more. As a long-time cruiser (you know, the big ships), I knew climbing aboard a sailboat for the first time to traverse the open waters of the Aegean Sea would represent something altogether foreign to me.

I was fairly certain I would have to deal with a bout or two of seasickness. 5 tips: the heavy weather gybe – Yachting World. Of all sailing manoeuvres a heavy weather gybe is the one that can strike fear into the hearts of even professional racers. Jonty Sherwill asks Rob Greenhalgh for tips on how to deal with it With your heart rate rising like a jockey heading towards Becher’s Brook in the Grand National, your gaze is fixed on the gybe mark that’s getting ever closer.

You may have been through this procedure countless times before, but picking the right wave at the right moment to gybe is a fresh challenge every time. At play are elemental forces poised to have their fun if you drop your guard at a crucial moment. Today is more testing than usual, a gusty 25-30-knot wind is pushing against two knots of ebb tide and kicking up a short, confused sea, plus a boat overlapped to windward is looking keen to gybe as soon as you do.

“Everyone ready?” Experts examine Oyster Yacht that sank. Oyster 90 that lost her keel and sank has been raised and investigations are ongoing into the structural failure that caused the keel and its stub to break away Polina Star III, a 90ft version of an Oyster 825 that lost her keel and sank off the coast of Spain on 4 July 2015, has been raised and is now being examined by experts who are investigating the cause of the failure. Keel failure: the shocking facts - Yachting World. Keel damage is a very real danger To contemplate the loss of your keel is to think the unthinkable. Yet in recent years there have been several cases that have reminded us that this worst-case scenario can and does happen. How Much of a Sailor Are You? >> Scuttlebutt Sailing News. Find a Crew™ 50 innovations that changed sailing. Chris Beeson picks 50 innovations that have changed our safety, navigation, life on deck and more 50 innovations that changed sailing AIS lifts the veil, allowing you to see and be seen This is the biggest step in marine safety since President Clinton made GPS publicly available in 1996.

Heavy weather sailing. 10 classic pilotage mistakes in navigation… …and how to avoid them. How to pass your Yachtmaster exam. The global standard of sailing qualifications is achievable for any experienced, competent skipper. How to sail an Atlantic circuit. How to plan and execute night pilotage.