Title Capitalization: Your Online Title Case Tool. Word 2010: How to Insert Numbered Equations Properly. In which I run through a useful tip that Microsoft managed to just miss explaining… The Problem If you, like me, are in the process of writing a long scientific document which requires multiple reviewers to be able to view changes you may sadly be saddled with using Microsoft Word.* Now, in defence of Microsoft, they have definitely improved the way Word works. 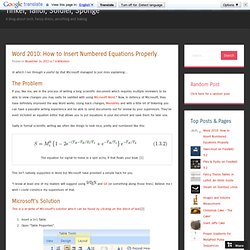 Using track changes, Mendeley and with a little bit of tinkering you can have a passable writing experience and be able to send documents out for review by your supervisors. They’ve even included an equation editor that allows you to put equations in your document and save them for later use. Free Online Dictionaries You've Probably Never Heard Of - Seven Specialized Dictionaries on the Web. You're probably familiar with at least one or two of the online English language dictionaries hosted by major British and American publishers. 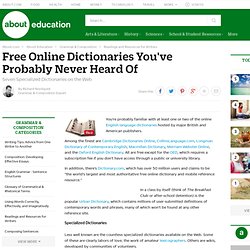 Among the finest are Cambridge Dictionaries Online, CollinsLanguage.com, Longman Dictionary of Contemporary English, Macmillan Dictionary, Merriam-Webster Online, and the Oxford English Dictionary. All are free except for the OED, which requires a subscription fee if you don't have access through a public or university library. Bibfilex. Bibfilex is a free bibliographic manager for GNU/Linux and Windows. 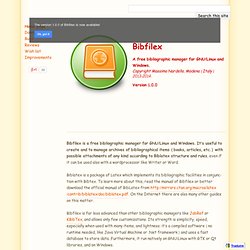 It's useful to create and to manage archives of bibliographical items (books, articles, etc.) with possible attachments of any kind according to Biblatex structure and rules, even if it can be used also with a wordprocessor like Writer or Word. Bi­bla­tex is a package of Latex which im­ple­men­ts its bib­li­o­graphic fa­cil­i­ties in con­junc­tion with Bibtex. To learn more about this, read the manual of Bibfilex or better download the official manual of BibLatex from On the Internet there are also many other guides on this matter. Bibfilex is far less advanced than other bibliographic managers like JabRef or KBibTex, and allows only few customizations. Its strength is simplicity, speed, especially when used with many items, and lightness: it's a compiled software (no runtime needed, like Java Virtual Machine or .Net framework) and uses a fast database to store data. 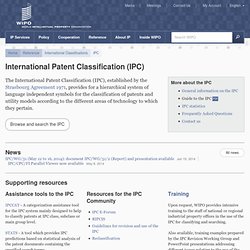 Browse and search the IPC Assistance tools to the IPC IPCCAT - A categorization assistance tool for the IPC system mainly designed to help to classify patents at IPC class, subclass or main group level. STATS - A tool which provides IPC predictions based on statistical analysis of the patent documents containing the specified search terms. IPC Green Inventory - Facilitates searches for patent information relating to Environmentally Sound Technologies. Training Upon request, WIPO provides intensive training to the staff of national or regional industrial property offices in the use of the IPC for classifying and searching. The Extended ASCII Chart. Scientific Writing and Knowledge Management with Docear « Mind of Matt. This is so far just a proposal – I did not fully test it out yet, but have exlored options for two days and this seems best, for my requirements. 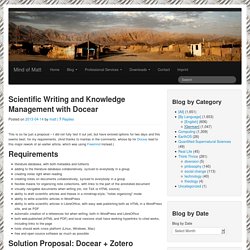 (And thanks to mantas in the comments, whose tip for Docear lead to this major rework of an earlier article, which was using Freemind instead.) Tool collection My proposal uses the following tools, which you should install (available for both Windows and Linux): Chromium. The free-software-only version of Chrome. Workflow. How do I change the font and size in math equations?

The correct name for it is either "Equation Editor" or "MicrosoftEquation 3.0", but I knew what you meant. 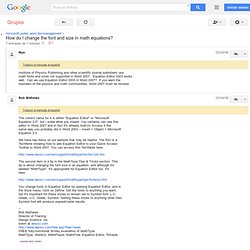 You certainly can use thiseditor in Word 2007 and in fact it's already built-in! Access it thesame way you probably did in Word 2003 -- Insert > Object > MicrosoftEquation 3.0. Microsoft Office Equation Editor. HTML figure Tag. Superscript. Superscripted text can be placed onto your website using the <sup> tag. 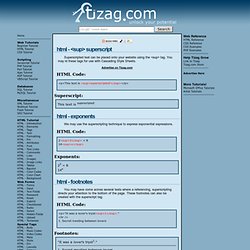 You may id these tags for use with Cascading Style Sheets. HTML Code: Scientific Writing and Knowledge Management with Docear « Mind of Matt. LaTeX/Mathematics. One of the greatest motivating forces for Donald Knuth when he began developing the original TeX system was to create something that allowed simple construction of mathematical formulas, while looking professional when printed. 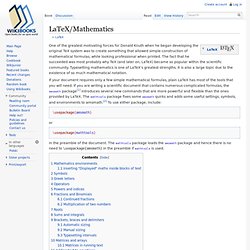 The fact that he succeeded was most probably why TeX (and later on, LaTeX) became so popular within the scientific community. Typesetting mathematics is one of LaTeX's greatest strengths. It is also a large topic due to the existence of so much mathematical notation. If your document requires only a few simple mathematical formulas, plain LaTeX has most of the tools that you will need. If you are writing a scientific document that contains numerous complicated formulas, the amsmath package[1] introduces several new commands that are more powerful and flexible than the ones provided by LaTeX.

Or in the preamble of the document. Mathematics environments[edit] LaTeX needs to know beforehand that the subsequent text does indeed contain mathematical elements.