ΟΙ ΦΑΝΤΑΣΜΕΝΕΣ / MOLIERE JEAN-BAPTISTE. DE. ΣΕΝΕΚΑ : ΘΥΕΣΤΗΣ / SENECA. Αποτελέσματα από σύνθετη αναζήτηση: Largest Collection of Plays and Musicals in the World. Which Shakespeare character had the greatest last words, and what were they? 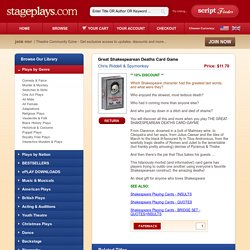 Who enjoyed the slowest, most tedious death? Who had it coming more than anyone else? ΛΕΞΙΚΟ ΤΟΥ ΘΕΑΤΡΟΥ / PAVIS PATRICE. Largest Collection of Plays and Musicals in the World. This great-value Anthology comprises five of the best plays from VAULT 2017, London’s biggest and most exciting arts festival The five plays are ... 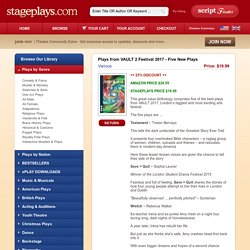 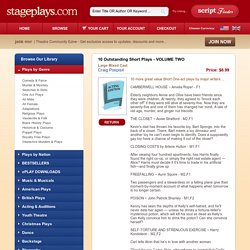 CAMBERWELL HOUSE ~ Amelia Roper - F1 Elderly neighbors Annie and Olive have been friends since they were children. At twenty, they agreed to "knock each other off" if they were still alive at seventy-five. Now they are seventy-five and one of them has changed her mind. A tale of old age, murder, and ginger nut biscuits. Largest Collection of Plays and Musicals in the World. Amazing value - 10 Short One-act plays by major writers ... 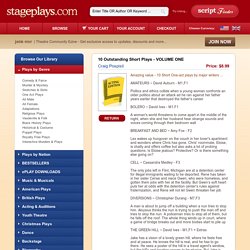 AMATEURS ~ David Auburn - M1,F1 Politics and ethics collide when a young woman confronts an older politico about an attack ad he ran against her father years earlier that destroyed the father's career BOLERO ~ David Ives - M1,F1. Largest Collection of Plays and Musicals in the World. "I wish I’d had this book when I was starting out as a young director ... 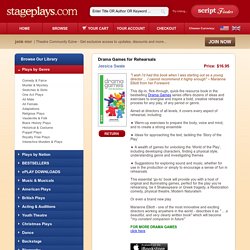 I cannot recommend it highly enough" ~ Marianne Elliott from her Foreword This dip-in, flick-through, quick-fire resource book in the bestselling Drama Games series offers dozens of ideas and exercises to energise and inspire a bold, creative rehearsal process for any play, of any period or genre. Aimed at directors of all levels, it covers every aspect of rehearsal, including: ★ Warm-up exercises to prepare the body, voice and mind, and to create a strong ensemble ★ Ideas for approaching the text, tackling the ‘Story of the Play’ ★ A wealth of games for unlocking the ‘World of the Play’, including developing characters, finding a physical style, understanding genre and investigating themes. 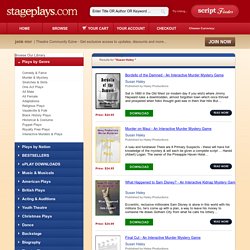 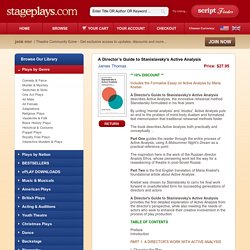 The Money Shot. Epic Love and Pop Songs. Bl... Bl... Bluebeard by Mark Billen. Ridley Plays 1 - Pitchfork Disney & Fastest Clock in the Universe & Ghost from a Perfect Place. Ridley's first three plays heralded the arrival of a unique and disturbing voice in the world of contemporary drama They are seminal works in the development of the 'in yer face' theatre that emerged in Britain during the mid-1990s The three plays all manifest Ridley's vivid and visionary imagination and the dark beauty of his outlook, resonating with his trademark themes - East London, storytelling, moments of shocking violence, memories of the past, fantastical monologues, and that strange mix of the barbaric and the beautiful he has made all his own The Pitchfork Disney was Ridley's first play and is now seen as launching a new generation of playwrights who were unafraid to shock and court controversy. 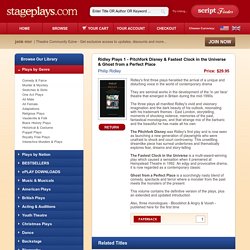 This unsettling, dreamlike piece has surreal undertones and thematically explores fear, dreams and story-telling. Johnny McKnight. Steve Blount & Peter Daly & Gavin Kostick & Janet Moran. CRITICS’ PICK - New York Times May has come to dance Her boyfriend is away and she needs the company Joe's been doing this a while Recently divorced, he's taking May through the steps. 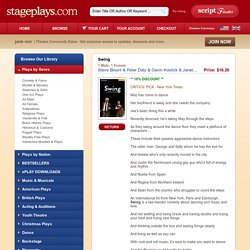 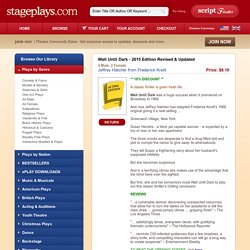 Wait Until Dark was a huge success when it premiered on Broadway in 1966 And now Jeffrey Hatcher has adapted Frederick Knott's 1966 original giving it a new setting ... Greenwich Village, New York. The Sluts of Sutton Drive. ‘Would you ever want to sit with me in the dark? Just sit with the lights out, barely even touching, maybe not touching at all, and just listen to me breathe?’ Everybody wants a piece of Stephanie Schwartz Her son’s demanding nuggets, her boyfriend wants her to wax and her best friend’s taking her to a striptease class And now there’s a rapist on Sutton Drive And an obscene caller invading her home. Richard Greenberg. Winner of the Outer Critics Circle Award In their Harlem mansion, during the early years of the twentieth century, the Collyer brothers share an eccentric life, still within reason Langley is a concert pianist by profession but prefers his studies of the world's minutiae, all of which he considers collectible His older brother, Homer, a former admiralty lawyer and aspiring intrigant, maintains the household and dreams of wilder times These seem about to begin when the beautiful socialite Milly inserts herself into the Collyer ménage, bringing with her money, secrets and designs on Langley As the first act unfolds, a wedding is strategized; as it ends, the wedding is aborted.

Tiny Kushner. Five one-act playlets from the Pulitzer prize winning author of Angels in America Tiny Kushner reveals that Tony Kushner's mastery of the short form is as pronounced as his mastery of the epic Replete with scintillating turns of phrase, rich in wit and wisdom, and branded with his trademark intelligence, here are five marvelous short plays by one of the most gifted playwrights of his generation ... Image of an Unknown Young Woman.

A startlingly theatrical look at what happens when it all kicks off ... She's a young woman in a yellow dress And she's been shot by the police As a video goes viral, a revolution begins to stir Ali and Leyla are panicking – they uploaded the footage and now the authorities are after them. The Mentalists. From the author of the acclaimed One Man, Two Guvnors ... War, poverty, corruption, spiralling taxes, bad behaviour, inter-personal violence and over-population Do these things worry you? Middle-aged manager Ted hits on a Utopian plan to change the way we live in this darkly funny play ... 'Bean is making merry here with his experience as both a stand-up comedian and a sit-down psychologist. What's particularly impressive is his ability to suspend a joke or tall tale's pay-off, or end it in an unexpected way. " ~ What's On Stage ★★★★ " successful conversational, ruminative piece that dramatises the mutual dependency of old friends ... this oddest of “Odd Couple” comedies" ~ The Independent ★★★★ "It seems obvious that any show that brings such a great comic team together will be hilarious and the show most certainly lives up to expectations.

Stone Soup. A Mad Breakfast - PDF. How To Survive A Zombie Apocalypse. Thark - ACTING EDITION. Our Teacher’s a Troll. Once upon a time, not so very long ago, there were two terrible twins called Holly and Sean who got up to all kinds of mischief In fact, they were so badly behaved at school that the Head Teacher, Mrs Spike, had a nervous breakdown and was found in the sand pit eating sand and mooing like a cow The twins were extremely pleased with themselves That is, until the new Head Teacher arrived You see, the new Head Teacher was a - Shaun McKenna from Peter James. Largest Collection of Plays and Musicals in the World. How far will you go to get what you want? Largest Collection of Plays and Musicals in the World. Largest Collection of Plays and Musicals in the World. Teenagers and technology collide with perilous consequences as the play confronts sexuality, body image and cyber-bullying. Αποτελέσματα από σύνθετη αναζήτηση: 7/24 'Η Ο ΘΡΥΛΟΣ ΤΟΥ ΑΝΤΡΑ ΠΟΥ ΑΙΩΡΕΙΤΑΙ ΠΑΝΩ ΑΠΟ ΤΑ ΠΑΡΚΑ / NOLLA-GUAL ENRIC.