Facebook owned Whatsapp will take on Amazon in online shopping. Will add product catalogs, allowing businesses to showcase their products on the platform. 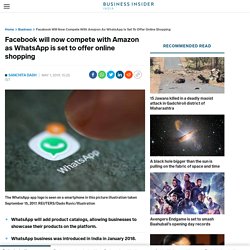 Was introduced in India in January 2018. The company’s payments platform WhatsApp pay is live in India in its beta version.Facebook, at the F8 developer conference, revealed that WhatsApp, which has integrated payments into its app in India, will soon enable . With this move, the messaging app is likely to become an even bigger part of Facebook’s India business. will soon allow businesses to add a product catalogue on WhatsApp. “With catalogs, businesses can showcase their goods so people can easily discover them,” claimed Facebook. WhatsApp business had been successfully running in India. Ever since the launch, many big businesses had added to ride WhatsApp’s immensely popularity in India. The most significant part of the Facebook’s evolving deck in India is WhatsApp pay. This puts WhatsApp in the Indian e-commerce space, which is already led by players like India, Flipkart, Paytm etc.

Industrial IoT Startup Altizon Raises $7 Mn From TVS Motors, Others. The Ultimate Guide to Speed up Wordpress Performance. Cars are regulated for safety – why not information technology? As the computing industry grapples with its role in society, many people, both in the field and outside it, are talking about a crisis of ethics. 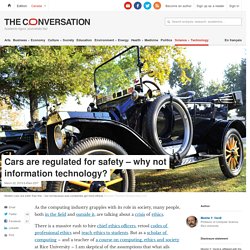 There is a massive rush to hire chief ethics officers, retool codes of professional ethics and teach ethics to students. But as a scholar of computing – and a teacher of a course on computing, ethics and society at Rice University – I am skeptical of the assumptions that what ails technology is a lack of ethics, and that the best fix is to teach technologists about ethics. Instead, in my view, the solution is government action, which aims at balancing regulation, ethics and markets. This isn’t a radical new idea: It’s how society treats cars and driving. Consider, for instance, the Ford Model T, the first mass-produced and mass-consumed automobile. Information Technology Enters A 'Psychic' Stage. You Should be Aware of These Mobile App Development Predictions. It’s amazing to see how Mobile app development is at its peak, where more and more developers are found jumping on the bandwagon on this lucrative field. 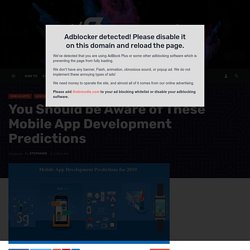 With the dawn of the internet on desktops to laptops and now on smartphones, browsing has become a smoother and simpler task. Earlier there was a time when sceptics had predicted mobile app development wouldn’t last any longer. As of now, the tables have completely turned! Over the past few years, there has been observed a surge of mobile apps revamping several aspects of our personal and professional lives. Google Maps Will Now Warn You About Speed Cameras Ahead of You. Many a time we have found ourselves in situations when the road ahead is empty, you are enjoying the drive and unknowingly exceed the speed limit by a small margin. 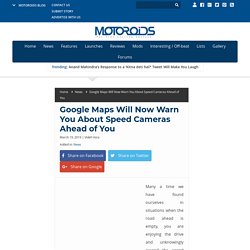 With an increasing number of speed cameras in our cities, it has now become a rather expensive mistake to commit, especially when you are exceeding the speed limit by a mere 1-5 kmph. Thanks to Google maps now, we can be warned of these contraptions well in advance to make sure that the speed of the car is in check and avoid a rather huge fine. Available in our country since last month, this feature is well known and used in other countries as well. Also Read: KTM 790 Duke Expected to Hit Indian Showrooms in the Coming Month The system works by having other users report the presence of the speed camera, which is then verified by multiple users. Now Spotify hits back, calls Apple ‘monopolist’ The tug of war between Spotify and Apple has intensified, with the Swedish music streaming service now calling Apple a “monopolist”. 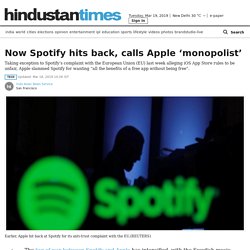 Taking exception to Spotify’s complaint with the European Union (EU) last week alleging iOS App Store rules to be unfair, Apple slammed Spotify for wanting “all the benefits of a free app without being free”. According a Variety report on Sunday, Spotify said that “Apple’s response to our complaint before the European Commission is not new and is entirely in line with our expectations”. iOS Trends: What’s New in the Store for 2019? Most people do not verify fake news before sharing, study shows. Most people do not verify whether a new piece of information is accurate or fake before sharing it on social media, regardless of age, social class or gender, a study has found. 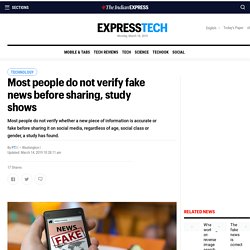 Researchers at Ohio University in the US found that several factors can be used to detect misinformation, otherwise known as “fake news,” on social media. The study, published in the journal Behaviour & Information Technology, found that, by looking at certain factors, it is possible to predict if someone is likely to share misinformation based on the same factors. “This is a pioneering study that helps understand why individuals would share misinformation on social media using a theoretical lens and information literacy factors,” said M Laeeq Khan, a professor at Ohio University.

“Fake news and misinformation could be rightly termed as the major issues of our time. 'Smart' Rigs To Digital Retrofits: How Oil And Gas Explorers Are Getting Lean And Fit. Which Platform is Better For On-Demand App For Your Small Business - NoBrain.co. Mobile technology is everywhere around! Today people are seen ditching desktops and laptops, showing more interest in smartphones where the end goal can be achieved within a couple of clicks.

This has resulted in an escalating growth in the field of mobile app development (Android). According to several studies, Android was shown to have more user satisfaction than any other platform. Proving their worth in today’s mobile-driven age is the need of the hour for businesses across the globe. Indigenous datasets: A listing to help AI perform better in India. If you are a toll plaza operator looking to use a computer vision-based artificial intelligence (AI) system to collect charges from highway users, you are going to run into a hurdle pretty fast. India doesn’t have a standard database that can feed that AI system. Here’s why. You decide to instal cameras that can automatically read vehicle number plates and help sync the information with your company’s database and minimise collection time. A little-known AI method can train on your health data without threatening your privacy.

In 2017, Google quietly published a blog post about a new approach to machine learning. 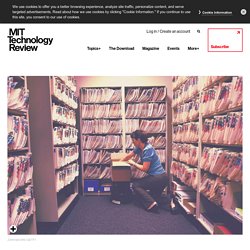 Unlike the standard method, which requires the data to be centralized in one place, the new one could learn from a series of data sources distributed across multiple devices. The invention allowed Google to train its predictive text model on all the messages sent and received by Android users—without ever actually reading them or removing them from their phones. How to Fix The Broken Links in Your WordPress Site - Tribulant Software Blog. Most Common SEO Mistakes to Avoid. Search engine optimization has witnessed a lot of growth in the past few years. 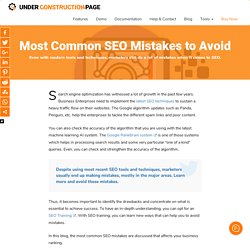 Business Enterprises need to implement the latest SEO techniques to sustain a heavy traffic flow on their websites. The Google algorithm updates such as Panda, Penguin, etc. help the enterprises to tackle the different spam links and poor content. You can also check the accuracy of the algorithm that you are using with the latest machine learning AI system. The Google RankBrain system is one of those systems which helps in processing search results and some very particular “one of a kind” queries. Even, you can check and strengthen the accuracy of the algorithm. Thus, it becomes important to identify the drawbacks and concentrate on what is essential to achieve success. In this blog, the most common SEO mistakes are discussed that affects your business ranking.

Content Optimization Content optimization is essential when we talk about SEO. Avoid using analytics for conversion Ignoring the formal link building. Gmail Big Redesign for Android and iOS. How SharePoint Development is evolving in the Future? - EnjoySharePoint.