Rape fantasies. I have been struggling with my sexuality for a few years. 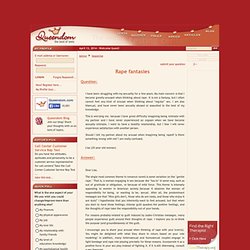 My main concern is that I become greatly aroused when thinking about rape. It is not a fantasy, but I often cannot feel any kind of arousal when thinking about "regular" sex. I am also bisexual, and have never been sexually abused or assaulted to the best of my knowledge. Women's Rape Fantasy. Rape fantasy alert. Meet Roxxxy. 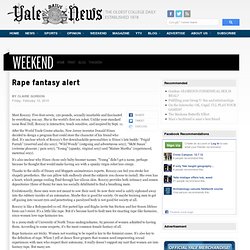 Five-foot-seven, 120 pounds, sexually insatiable and fascinated by everything you say. She is the world’s first sex robot. Unlike your standard issue Real Doll, Roxxxy is interactive, touch sensitive, and inspired by Sept. 11. After the World Trade Center attacks, New Jersey inventor Donald Hines decided to design a program that could store the character of his friend who died. It’s unclear which of Roxxxy’s five downloadable personalities is Hines’s late buddy: “Frigid Farrah” (reserved and shy sexy), “Wild Wendy” (outgoing and adventurous sexy), “S&M Susan” (extreme pleasure / pain sexy), “Young” (spunky, virginal sexy) and “Mature Martha” (experienced, maternal sexy). It’s also unclear why Hines chose only baby-boomer names. Thanks to the skills of Disney and Muppets animatronics experts, Roxxxy can feel you stroke her shapely prosthetics.

Evolutionarily, these men were not meant to sow their seed. Roxxxy is like a Rohypnoled co-ed. What's Behind Rape Fantasies? - Page 1 - People. How many women have rape fantasies? 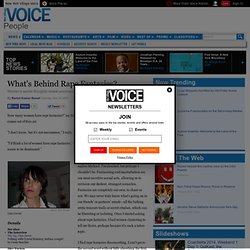 " my friend Michael Malice asks over drinks. The question comes out of thin air. "I don't know, but it's not uncommon," I reply. "I'd think a lot of women have rape fantasies," says another guy friend. "Every girl I've been with wants to be dominated. " photo: Erin Hosier Lisa Carver Details Related Stories More About "You should know, since you're into spanking," replies Michael. I find rape fantasies disconcerting. I called Lisa Carver (myspace.com/drugsarenice), the woman behind the infamously in-your-face band Suckdog and author of the brilliant new memoir Drugs Are Nice (Soft Skull Press, 2005). The desire to be captured, taken, used, and abused—while enjoying it—came up several times. In my random sampling, only one woman, "Dana," wanted to rape a guy.

Human Nature : Rape, Fantasies, and Female Arousal. Do some women fantasize about rape? 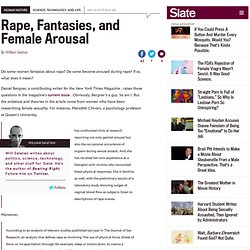 Do some become aroused during rape? Why Men Should Fear the Rape Fantasy: Sex + Other Releases. Jim was hiding between two bushes in the back yard, but lack of space was the least of his concerns. 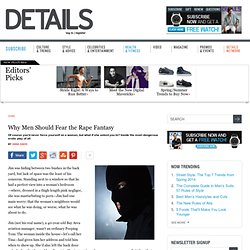 She'd also left the back door unlocked so that he could easily get in. Her instructions, however, were more explicit than that: He was to slap her across the face, throw her against the wall, and tie her up with rope she'd left for that very purpose. Women's Rape Fantasies: How Common? What Do They Mean? Some women have fantasies of being forced into sex . 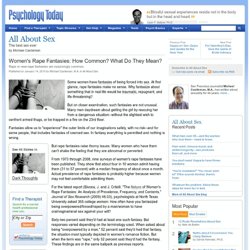 At first glance, rape fantasies make no sense. Why fantasize about something that in real life would be traumatic , repugnant, and life-threatening? But on closer examination, such fantasies are not unusual. The Fantasy of Acceptable 'Non-Consent': Why the Female Sexual Submissive Scares Us (and Why She Shouldn't) December 28, 2008 | Like this article? 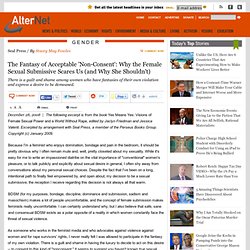 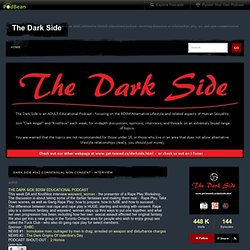 The discussion is about taking some of the darker fantasies and making them real - Rape Play, Take Down scenes, as well as Gang Rape Play; how to prepare, how to fulfill, and how to succeed. The difference between real rape and rape play is HUGE, starting and ending with consent. Rape play is a common fantasy, and wayward_woman steps up thru ways to put one together, and what her own progression has been, including how her own sexual assault effected her original fantasy. We also get into a new group in the Toronto Ontario area for people who wish to enjoy group sex called the Fuck Club - who also do gang rape play for select members.

Consensual Non Consent? No one really doing anything they do not want to do so there really is any such things as a total power exchange relationship? 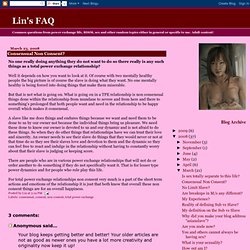 Well it depends on how you want to look at it. Of course with two mentally healthy people the big picture is of course the slave is doing what they want. No one mentally healthy is being forced into doing things that make them miserable. But that is not what is going on. What is going on in a TPE relationship is non consensual things done within the relationship from mundane to severe and from here and there to something’s prolonged that both people want and need in the relationship to be happy overall which makes it consensual. Consensual non-consent. The Issue of Consensual Non-Consent in Spanking « Finding Sara. Non-Consensual Consent? « Poundcake. I recently saw the documentary Graphic Sexual Horror, and am still mulling it over. 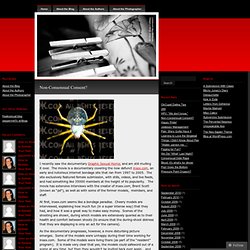 The movie is a documentary covering the now defunct insex.com, an early and notorious internet bondage site that ran from 1997 to 2005. The site exclusively featured female submission, with stills, videos, and live feeds, and had something like 35000 members at the height of its popularity. The movie has extensive interviews with the creator of insex.com, Brent Scott (known as “pd”), as well as with some of the former models, members, and staff. At first, insex.com seems like a bondage paradise. Cheery models are interviewed, explaining how much fun (in a super intense way) that they had, and how it was a great way to make easy money.