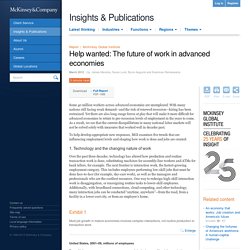 With many nations still facing weak demand—and the risk of renewed recession—hiring has been restrained. Yet there are also long-range forces at play that will make it more difficult for advanced economies to return to pre-recession levels of employment in the years to come. As a result, we see that the current disequilibrium in many national labor markets will not be solved solely with measures that worked well in decades past. To help develop appropriate new responses, MGI examines five trends that are influencing employment levels and shaping how work is done and jobs are created: 1. Over the past three decades, technology has altered how production and routine transaction work is done, substituting machines for assembly-line workers and ATMs for bank tellers, for example. Exhibit 1 Most job growth in mature economies involves complex interactions, not routine production or transaction work.

Enlarge 2. Exhibit 2 3. 4. 5. The Shifting Economics of Global Manufacturing. Cost Competitiveness: A Country View For the better part of three decades, a rough, bifurcated conception of the world has driven corporate manufacturing investment and sourcing decisions. 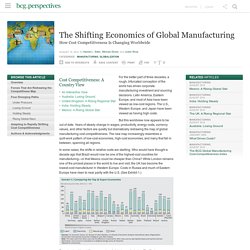 Latin America, Eastern Europe, and most of Asia have been viewed as low-cost regions. The U.S., Western Europe, and Japan have been viewed as having high costs. But this worldview now appears to be out of date. The emerging global labor market. MGI's latest research takes a look at the emerging global labor market in services and explores the notion of "global resourcing," the process a company goes through to decide which of its activities could be performed anywhere in the world, where to locate them, and who will do them. 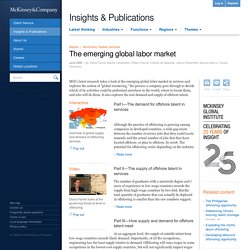 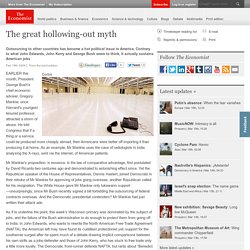 He told Congress that if a thing or a service could be produced more cheaply abroad, then Americans were better off importing it than producing it at home. Trust, Responsibility and the Globally Integrated Enterprise. There is general agreement that the corporation is going through dramatic changes in the 21st century, driven by a combination of advances in information technologies - especially the Internet - and the heightened competitive pressures brought about by globalization. 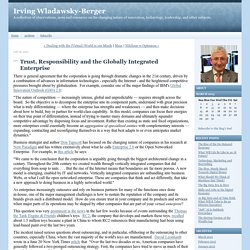 For example, consider one of the major findings of IBM's Global Innovation Outlook (GIO) 2.0: "The nature of competition — increasingly intense, global and unpredictable — requires strength across the board. So the objective is to decompose the enterprise into its component parts, understand with great precision what is truly differentiating — where the enterprise has strengths and weaknesses — and then make decisions about how to build, buy or partner for world-class capability.

In this model, companies can focus their energies on their true point of differentiation, instead of trying to master many domains and ultimately squander competitive advantage by dispersing focus and investment. Think about it. IBM's Sam Palmisano: 'Always Put the Enterprise Ahead of the Individual' The Center for Global Enterprise. “The IBM spirit, the IBM heart, and the IBM language were the same in all tongues and in all countries” After reading Re-Think: A Path to the Future it is immediately apparent to me that Sam Palmisano bleeds IBM, and that he wholeheartedly agrees with the sentiment expressed in the above quote by Thomas J. 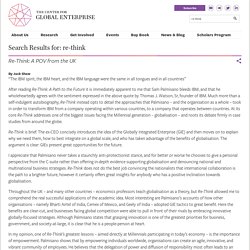 Watson, Sr, founder of IBM. Much more than a self-indulgent autobiography, Re-Think instead opts to detail the approaches that Palmisano – and the organisation as a whole – took in order to transform IBM from a company operating within various countries, to a company that operates between countries. At its core Re-Think addresses one of the biggest issues facing the Millennial generation – globalisation – and roots its debate firmly in case studies from around the globe.

'Re-Thinking' Tax: Are you Ready for the Globally Integrated Tax Function? Former IBM CEO Sam Palmisano puts several interesting questions to business leaders in his new e-book, “Re-Think: A Path to the Future.” 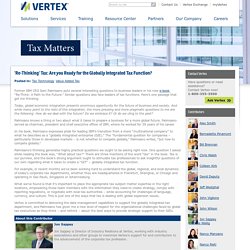 Similar questions also face leaders of tax functions. Here’s one passage that got me thinking: Sustainable scale of an organization: A case study at IBM? How many employees can IBM sustain? 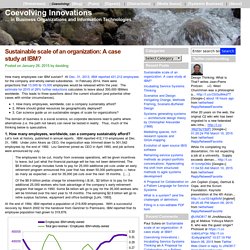 At Dec. 31, 2013, IBM reported 431,212 employees for the company and wholly-owned subsidiaries. In February 2014, there were projections that 13,000 to 15,000 employees would be released within the year. The estimate for 2015 of 26% further reductions calculates to leave about 300,000 IBMers worldwide. This leads to three questions about the current situation (and potential other cases with similar circumstances). 1. The domain of business is a social science, so corporate decisions lead to paths where alternatives (i.e. the path not taken) can never be tested in reality. "The Globally Integrated Enterprise" 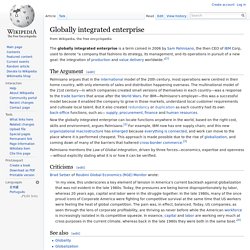