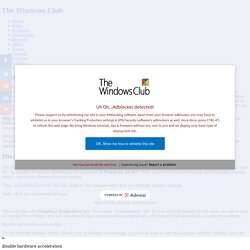 This also allows for smooth rendering of graphics. In most processors, instructions are executed sequentially, i.e., one by one, but you can perform them faster if you modify the same process a bit using some technique. The idea is to move all graphics and text rendering from the Central Processing Unit to the Graphics Processing Unit. The idea is to speed up graphics performance and the rendering by moving it from the CPU to the GPU, thereby getting better performance. Sometimes loosely called as graphics accelerators or floating-point accelerators, hardware accelerators can improve the performance of an application significantly. While the settings are best left at their default values in Windows, you can if you wish to, turn off or disable Hardware Graphics Acceleration or reduce Hardware Acceleration.

Session Sharing Does Not Occur if You Click on Multiple Applications at the Same Time. Users Prompted to Download, Run, Open Launch.ica File, Instead of Launching Connection. Receiver Extension APIs. How to Remove Client Files Remaining on System after Uninstalling Receiver for Windows. Encryption. Reduce Citrix logon times by up to 75% – JGSpiers.com. This post covers several recommendations that increased by logon times by more than 75%, even on non-persistent machines where the user profile is not permanently cached. ♣ What is Interactive Session Time?

Keep GPOs at a minimum (don’t be GPO happy).

Graceful Logoff from a Published Application Renders the Session in Active State. When publishing an application, only the main executable file is specified. 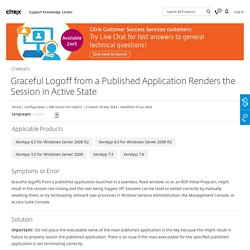 However, some applications might spawn additional processes that run in the background and are not closed by the corresponding main executable file. Additional processes might also be created, from scripts that are executed, or from specific registry keys, such as the RunOnceKey: HKEY_LOCAL_MACHINE\SW\Microsoft\Windows\CurrentVersion\RunOnce Some processes might create a visible window for added functionality, and others might not. Because the Explorer.exe Desktop is not running when launching an application in one of these ways, there is no default mechanism in either Presentation Server or Windows to terminate these background processes when a user has exited the main application. Active Sessions After User Logs Off in a XenApp Environment When Upgraded from Windows Server 2003 to Windows Server 2008.

How to customize Citrix Receiver for Windows – the kolbicz blog. Customizing Citrix frontends like Storefront or Netscaler has been done since a long time and is pretty well documented on the internet. but what about the windows receiver itself? 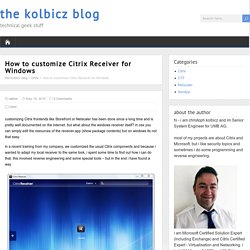 In osx you can simply edit the resources of the receiver.app (show package contents) but on windows its not that easy. in a recent training from my company, we customized the usual Citrix components and because i wanted to adapt my local receiver to the same look, i spent some time to find out how i can do that. this involved reverse engineering and some special tools – but in the end i have found a way. 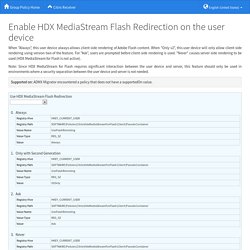 Supported on: ADMX Migrator encountered a policy that does not have a supportedOn value. Citrix Receiver Extension APIs. Receiver extension APIs. This document lists CSS and Javascript extension points for Receiver 3.0. 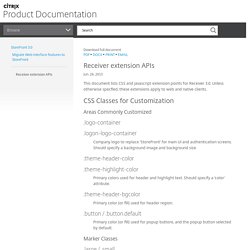 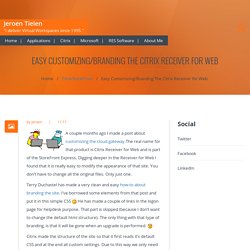 Digging deeper in the Receiver for Web I found that it is really easy to modify the appearance of that site. You don’t have to change all the original files. Only just one. Terry Duchastel has made a very clean and easy how-to about branding the site. FIX: How to get rid of the annoying Add Account window after 4.4 upgrade - Receiver for Windows 4.x. PowerShell Script to Uninstall all Versions of Citrix Client and Install Receiver 3.x - Shaun Ritchie. #*FileName: Citrix_Client_Uninstall_and_Install.ps1 #*Created 10/05/2013 #*Author: Shaun Ritchie #*www.shaunritchie.co.uk. 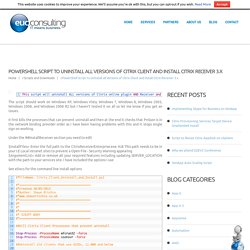 How to Configure Default Device Access Behavior of Receiver, XenDesktop and XenApp. Software Solution Disclaimer This package contains a software solution that has been replaced by a more recent version available for download from the Citrix support website (support.citrix.com). 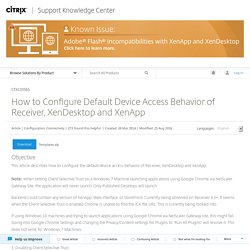 It is provided merely for your convenience. Citrix recommends applying the most up-to-date version of the software, which addresses the fix or enhancement being targeted. Later versions of the release may include multiple changes that address different areas including security vulnerabilities, code fixes, and enhancements. Deploy Receiver for Windows using Active Directory and sample startup scripts.