Enviropig - Wikipedia. Enviropig is the trademark for a genetically modified line of Yorkshire pigs, with the capability to digest plant phosphorus more efficiently than conventional unmodified pigs, that was developed at the University of Guelph.[1] The benefits of the Enviropig if commercialized include reduced feed cost and reduced phosphorus pollution[2] as compared to the raising of conventional pigs. 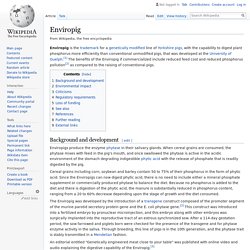 Background and development[edit] Enviropigs produce the enzyme phytase in their salivary glands. When cereal grains are consumed, the phytase mixes with feed in the pig's mouth, and once swallowed the phytase is active in the acidic environment of the stomach degrading indigestible phytic acid with the release of phosphate that is readily digested by the pig. Cereal grains including corn, soybean and barley contain 50 to 75% of their phosphorus in the form of phytic acid. Environmental impact[edit] Obstacles in Commercializing Enviropig - The Maureen & Mike Mansfield Center Ethics and Public Affairs Program - University Of Montana.

The health and environmental impacts of pork entering the food supply and fecal matter and carcasses contacting the environment must all be thoroughly examined. 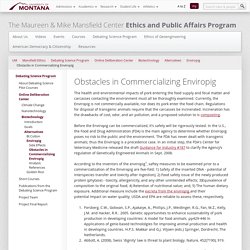 Currently, the Enviropig is not commercially available, nor does its pork enter the food chain. Regulations for disposal of transgenic animals require that the carcasses be incinerated. Incineration has the drawbacks of cost, odor, and air pollution, and a proposed solution to is composting. Before the Enviropig can be commercialized, it's safety will be rigorously tested. In the U.S., the Food and Drug Administration (FDA) is the main agency to determine whether Enviropig poses no risk to the public and the environment. Algal bloom. An algal bloom or marine bloom or water bloom is a rapid increase in the population of algae in an aquatic system. 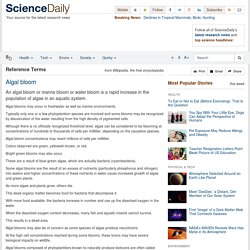 Algal blooms may occur in freshwater as well as marine environments. Typically only one or a few phytoplankton species are involved and some blooms may be recognized by discoloration of the water resulting from the high density of pigmented cells. Phosphorus. Gene-Altered "Enviropig" to Reduce Dead Zones? Move over, bacon. 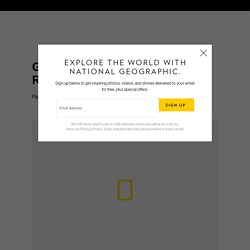 Here comes something greener. A genetically engineered pig recently approved for limited production in Canada makes urine and feces that contain up to 65 percent less phosphorous, officials have announced. That could be good news for lakes, rivers, and ocean deltas, where phosphorous from animal waste can play a role in causing algal blooms. Enviropig - Environmental Benefits. Enviropig™ > Environmental Benefits Approximately 50 to 75% of the phosphorus present in cereal grains including corn, soybeans, barley and wheat is present in an indigestible compound called phytate that passes through the digestive tract and is enriched in the manure approx. 4-fold because the protein and carbohydrates in cereals are digested and absorbed. 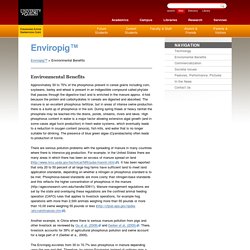 The manure is an excellent phosphorus fertilizer, but in areas of intense swine production there is a build up of phosphorus in the soil. During spring thaws or heavy rainfall the phosphate may be leached into tile drains, ponds, streams, rivers and lakes. High phosphorus content in water is a major factor allowing extensive algal growth (and in some cases algal toxin production) in fresh water systems, which eventually leads to a reduction in oxygen content (anoxia), fish kills, and water that is no longer suitable for drinking.