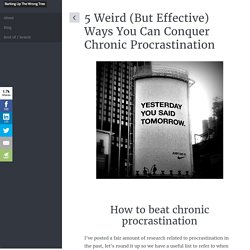 Dr. John Perry, author of The Art of Procrastination, explains a good method for leveraging your laziness: The key to productivity, he argues in “The Art of Procrastination,” is to make more commitments — but to be methodical about it. At the top of your to-do list, put a couple of daunting, if not impossible, tasks that are vaguely important-sounding (but really aren’t) and seem to have deadlines (but really don’t).

“Doing these tasks becomes a way of not doing the things higher up on the list,” Dr. A similar tip is described by Piers Steel, author of The Procrastination Equation: “My best trick is to play my projects off against each other, procrastinating on one by working on another.” Dr. 5 Unusual Tricks For Actually Reaching Your New Year's Goals. With the new year rolling around, most of us are planning ways to improve our health, set some big goals, and finally achieve things we have been putting off for a while. 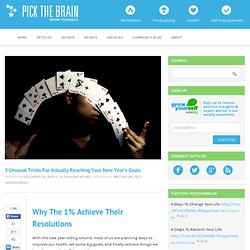 But when you look at the statistics, almost 80% of people will fail by the springtime, and after a year, only a smaller percentage of people are still involved with their goals at all. So here’s how to be that tiny percentage of people that are still going strong a year later. #1 Follow intrinsic motivation… rather than forcing yourself. Six Lazy Ways to Trick Your Brain Into Being Productive. The Daily Routines of Geniuses - HBR. Juan Ponce de León spent his life searching for the fountain of youth. 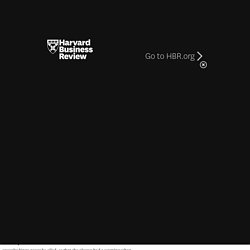 I have spent mine searching for the ideal daily routine. But as years of color-coded paper calendars have given way to cloud-based scheduling apps, routine has continued to elude me; each day is a new day, as unpredictable as a ride on a rodeo bull and over seemingly as quickly. Naturally, I was fascinated by the recent book, Daily Rituals: How Artists Work. Author Mason Curry examines the schedules of 161 painters, writers, and composers, as well as philosophers, scientists, and other exceptional thinkers.

As I read, I became convinced that for these geniuses, a routine was more than a luxury — it was essential to their work. A workspace with minimal distractions. A daily walk. Accountability metrics. 6 Things The Most Productive People Do Every Day. Ever feel like you’re just not getting enough done? 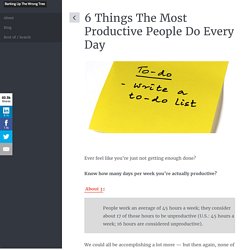 Know how many days per week you’re actually productive? About 3: People work an average of 45 hours a week; they consider about 17 of those hours to be unproductive (U.S.: 45 hours a week; 16 hours are considered unproductive). We could all be accomplishing a lot more — but then again, none of us wants to be a workaholic either. It’d be great to get tons done and have work/life balance. And who better to ask than Tim Ferriss, author of the international bestseller, The 4-Hour Workweek? (Tim’s blog is here and his podcast is here.) Below are six tips Tim offered, the science behind why they work, and insight from the most productive people around. 1) Manage Your Mood Most productivity systems act like we’re robots — they forget the enormous power of feelings.

The 18 Minute Ritual That Will Make Your Day Dramatically More Productive. 8 Things Everybody Ought to Know About Concentrating. “Music helps me concentrate,” Mike said to me glancing briefly over his shoulder.

Mike was in his room writing a paper for his U.S. History class. On his desk next to his computer sat crunched Red Bulls, empty Gatorade bottles, some extra pocket change and scattered pieces of paper. In the pocket of his sweat pants rested a blaring iPod with a chord that dangled near the floor, almost touching against his Adidas sandals. On his computer sat even more stray objects than his surrounding environment. 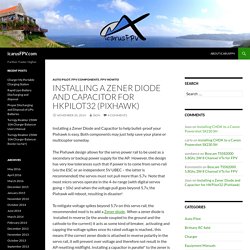 Both components may just help save your plane or multicopter someday. The Pixhawk design allows for the servo power rail to be used as a secondary or backup power supply for the AP. However, the design has very low tolerances such that if power is to come from servo rail (via the ESC or an independent 5V UBEC – the latter is recommended) the servos must not pull more than 5.7v. Note that most micro servos operate in the 4-6v range (with digital servos going > 10v) and when the voltage pull goes beyond 5.7v, the Pixhawk will reboot, resulting in disaster! To mitigate voltage spikes beyond 5.7v on this servo rail, the recommended mod is to add a Zener diode.