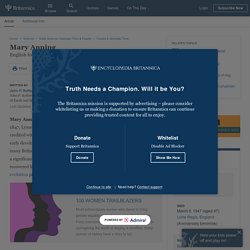 —died March 9, 1847, Lyme Regis), prolific English fossil hunter and amateur anatomist credited with the discovery of several dinosaur specimens that assisted in the early development of paleontology. Her excavations also aided the careers of many British scientists by providing them with specimens to study and framed a significant part of Earth’s geologic history.

Some scientists note that fossils recovered by Anning may have also contributed, in part, to the theory of evolution put forth by English naturalist Charles Darwin. Anning was one of two surviving children born to cabinetmaker and amateur fossil collector Richard Anning and his wife, Mary Moore. The family relied on the sale of fossils collected from seaside cliffs near their home along England’s Channel coast as a source of income. Over the course of her life, Anning also discovered the remains of several large vertebrates embedded in the cliffs of Lyme Regis. American scientist. Gertrude B. 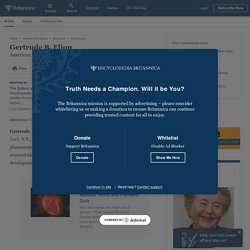 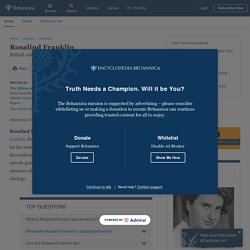 Franklin also contributed new insight on the structure of viruses, helping to lay the foundation for the field of structural virology. Top Questions What is Rosalind Franklin best known for? Rosalind Franklin discovered the density of DNA and, more importantly, established that the molecule existed in a helical conformation. Her work to make clearer X-ray patterns of DNA molecules laid the foundation for James Watson and Francis Crick’s suggestion that DNA is a double-helix polymer in 1953. What were Rosalind Franklin’s accomplishments?

Rosalind Franklin contributed new insight on the structure of viruses, helping to lay the foundation for the field of structural virology. Sau Lan Wu. American physicist Sau Lan Wu (Chinese: 吳秀蘭) is a Chinese American particle physicist and the Enrico Fermi Distinguished Professor of Physics at the University of Wisconsin-Madison. 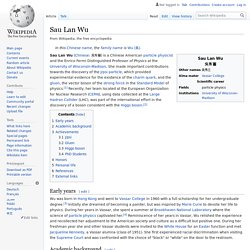 She made important contributions towards the discovery of the J/psi particle, which provided experimental evidence for the existence of the charm quark, and the gluon, the vector boson of the strong force in the Standard Model of physics.[1] Recently, her team located at the European Organization for Nuclear Research (CERN), using data collected at the Large Hadron Collider (LHC), was part of the international effort in the discovery of a boson consistent with the Higgs boson.[2] Early years[edit] 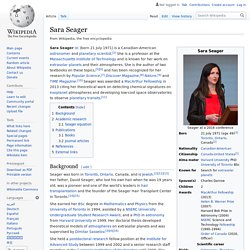 Emmanuelle Charpentier : biographie, actualités et émissions France Culture. Jennifer Doudna. American biochemist, professor Jennifer Anne Doudna ForMemRS (;[2] born February 19, 1964)[3] is an American biochemist known for her pioneering work in CRISPR gene editing, for which she was awarded the 2020 Nobel Prize in Chemistry along with Emmanuelle Charpentier.[4][5] She is the Li Ka Shing Chancellor's Chair Professor in the Department of Chemistry and the Department of Molecular and Cell Biology at the University of California, Berkeley. 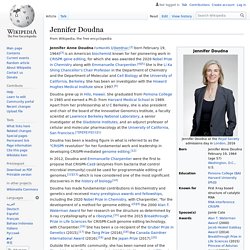 She has been an investigator with the Howard Hughes Medical Institute since 1997.[6] Doudna grew up in Hilo, Hawaii. She graduated from Pomona College in 1985 and earned a Ph.D. from Harvard Medical School in 1989. Doudna has been a leading figure in what is referred to as the "CRISPR revolution" for her fundamental work and leadership in developing CRISPR-mediated genome editing.[12] 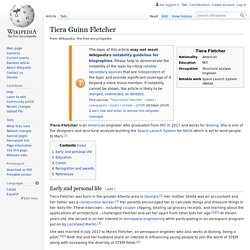 She is one of the designers and structural analysts building the Space Launch System for NASA which is set to send people to Mars.[1] Mae Jemison. American doctor and NASA astronaut Mae Carol Jemison (born October 17, 1956) is an American engineer, physician, and former NASA astronaut. 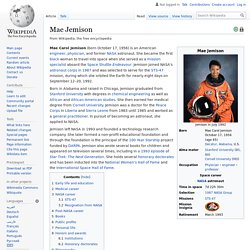 She became the first black woman to travel into space when she served as a mission specialist aboard the Space Shuttle Endeavour. Jemison joined NASA's astronaut corps in 1987 and was selected to serve for the STS-47 mission, during which she orbited the Earth for nearly eight days on September 12–20, 1992. Born in Alabama and raised in Chicago, Jemison graduated from Stanford University with degrees in chemical engineering as well as African and African-American studies. She then earned her medical degree from Cornell University. Katherine Freese. 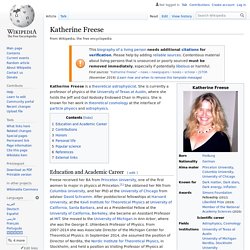 She is currently a professor of physics at the University of Texas at Austin, where she holds the Jeff and Gail Kodosky Endowed Chair in Physics. Dian Fossey. American zoologist Dian Fossey (, January 16, 1932 – c. 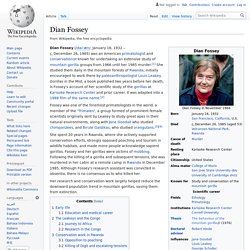 December 26, 1985) was an American primatologist and conservationist known for undertaking an extensive study of mountain gorilla groups from 1966 until her 1985 murder.[1] She studied them daily in the mountain forests of Rwanda, initially encouraged to work there by paleoanthropologist Louis Leakey. Gorillas in the Mist, a book published two years before her death, is Fossey's account of her scientific study of the gorillas at Karisoke Research Center and prior career. It was adapted into a 1988 film of the same name.[2] Jane Goodall. English primatologist and anthropologist Dame Jane Morris Goodall DBE (; born Valerie Jane Morris-Goodall on 3 April 1934),[3] formerly Baroness Jane van Lawick-Goodall, is an English primatologist and anthropologist.[4] Considered to be the world's foremost expert on chimpanzees, Goodall is best known for her 60-year study of social and family interactions of wild chimpanzees since she first went to Gombe Stream National Park in Tanzania in 1960, where she witnessed human-like behaviours amongst chimpanzees, including armed conflict.[5] She is the founder of the Jane Goodall Institute and the Roots & Shoots programme, and she has worked extensively on conservation and animal welfare issues.

Émilie du Châtelet (1706 - 1749) - Biography. Biography We should first make some remarks about Émilie du Châtelet's name. Before her marriage her name was Gabrielle-Émilie Le Tonnelier de Breteuil and she was called Gabrielle-Émilie by her family but later she was called simply Émilie by Voltaire and others. We should also note that her husband was the Marquis du Chastellet and her publications appear under the name Madame la Marquis du Chastellet. The spelling "Châtelet" was introduced by Voltaire and has now become standard. Katherine Johnson. African American mathematician Creola Katherine Johnson (née Coleman; August 26, 1918 – February 24, 2020) was an American mathematician whose calculations of orbital mechanics as a NASA employee were critical to the success of the first and subsequent U.S. crewed spaceflights.[1] During her 35-year career at NASA and its predecessor, she earned a reputation for mastering complex manual calculations and helped pioneer the use of computers to perform the tasks.

The space agency noted her "historical role as one of the first African-American women to work as a NASA scientist".[2] Ada Lovelace. English mathematician and computer programming pioneer Augusta Ada King, Countess of Lovelace (née Byron; 10 December 1815 – 27 November 1852) was an English mathematician and writer, chiefly known for her work on Charles Babbage's proposed mechanical general-purpose computer, the Analytical Engine. She was the first to recognise that the machine had applications beyond pure calculation, and to have published the first algorithm intended to be carried out by such a machine. As a result, she is often regarded as one of the first computer programmers.[3][4] Augusta Byron was the only child of poet Lord Byron and Lady Byron.[5] All of Byron's other children were born out of wedlock to other women.[6] Byron separated from his wife a month after Ada was born and left England forever four months later.