Stasi files row as Britain refuses to return documents to Germany. The lives of others: inside the Stasi Museum – in pictures. Shocking New Research: Stasi Had Thousands of Spies in West Germany. Josef Frindt took his secret to the grave. 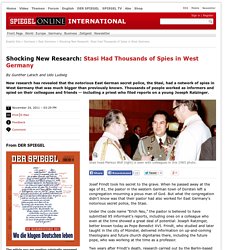 Russia's Role. Russia's involvement in world terrorismand the Czech connection By Honza Malina In the beginning of the year 2001, the Czech newspaper Necensurovane noviny (Uncensored News) and its editor and owner, Petr Cibulka, wrote a piece about Russia and its involvement in the so-called "democratic" movement in the Communist Bloc. 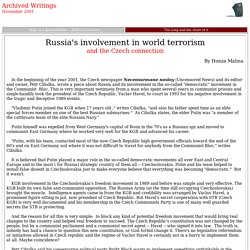 This is very important testimony from a man who spent several years in communist prisons and single-handily took the president of the Czech Republic, Vaclav Havel, to court in 1993 for his negative involvement in the tragic and deceptive 1989 events. "Vladimir Putin joined the KGB when 17 years old ," writes Cibulka, "and also his father spent time as an elite special forces member on one of the best Russian submarines.

" Betrayal Lurked So Very Close to Home - latimes. PARDUBICE, Czech Republic — It was a dismal winter day when my husband and I traveled to this town of gingerbread and steeples to read for ourselves what the secret police had documented about our lives during four decades of communism. 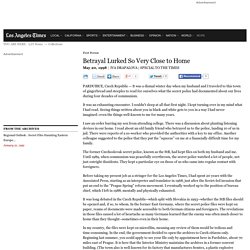 It was an exhausting encounter. I couldn't sleep at all that first night. I kept turning over in my mind what I had read. Seeing things written about you in black and white gets to you in a way I had never imagined--even the things well-known to me for many years. I saw an order barring my son from attending college. Bonn shocked that East Germany knew more of its secrets than it imagined - tribunedigital-baltimoresun.

December 28, 1990|By Los Angeles Times BONN, Germany -- It did not end the way cloak-and-dagger stories are supposed to, with briefcases exchanged on foggy bridges, or midnight dashes across nameless borders. 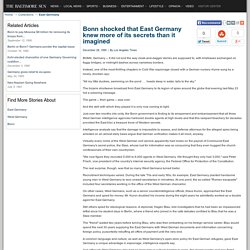 Instead, one of the most thrilling chapters in Cold War espionage closed with a German nursery rhyme sung by a lonely, drunken spy: "All my little duckies, swimming on the pond . . . heads deep in water, tails to the sky. " The bizarre shortwave broadcast from East Germany to its legion of spies around the globe that evening last May 23 hid a sobering message. The game -- their game -- was over. And the skill with which they played it is only now coming to light. Just over two months into unity, the Bonn government is finding to its amazement and embarrassment that all three West German intelligence agencies harbored double agents at high levels and that this rampant treachery for decades provided the East bloc a treasure trove of Western secrets. 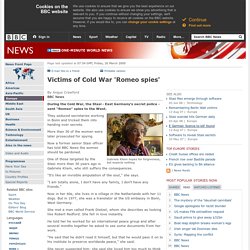 They seduced secretaries working in Bonn and tricked them into handing over secrets. More than 30 of the women were later prosecuted for spying. Now a former senior Stasi officer has told BBC News the women should be pardoned. Documentary 2015 Spies of the Cold War. Stasi spy's son tells his story. "Someone might as well have told me my father was an alien, or a woman! 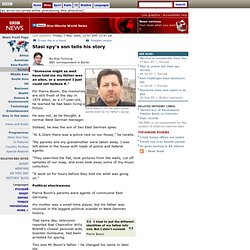 I just could not believe it. " For Pierre Boom, the memories are still fresh of the day in 1974 when, as a 17-year-old, he learned he had been living a fiction. He was not, as he thought, a normal West German teenager. Instead, he was the son of two East German spies. "At 6.32am there was a police raid on our house," he recalls. "My parents and my grandmother were taken away. "They searched the flat, took pictures from the walls, cut off samples of our soap, and even took away some of my music collection. "It went on for hours before they told me what was going on. " Political shockwaves Pierre Boom's parents were agents of communist East Germany. His mother was a small-time player, but his father was involved in the biggest political scandal in West German history. That same day, television reported that Chancellor Willy Brandt's closest personal aide, Guenter Guillaume, had been arrested for spying.

Gripping drama. Obituary: Markus Wolf. The man who came to epitomise the ruthless world of the East German spy machine during the Cold War, Markus Wolf, has died at his home in Berlin. 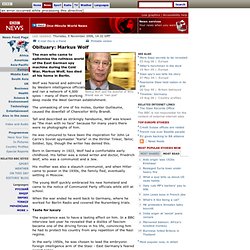 Wolf was feared and admired by Western intelligence officials and ran a network of 4,000 spies - many of them working deep inside the West German establishment. Cold War Espionage: 10,000 East Germans Spied for the West. The Berlin Wall was built in 1961. 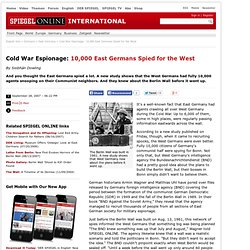 A new study shows that West Germany new about the plans before it went up. It's a well-known fact that East Germany had agents crawling all over West Germany during the Cold War. Up to 6,000 of them, some in high places, were regularly passing information eastwards across the wall. According to a new study published on Friday, though, when it came to recruiting spooks, the West Germans were even better. Fully 10,000 citizens of Germany's communist half were spying for Bonn.