Ksenia Sobchak, the Stiletto in Putin’s Side. Sobchak knows well the toll of a Kremlin campaign of torment. 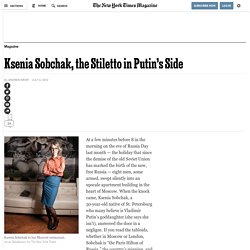 She remembers how Boris Yeltsin turned against her father, Anatoli Sobchak, a law professor who rose to prominence amid the Soviet ruins with the bearing and look — tall, lean, erudite-sounding — of a Western European politician. Putin's daughter, a young billionaire and the president's friends. Power matrix: Ranking Europe’s leaders and ambassadors. Petr Since when is Turkey in Europe? 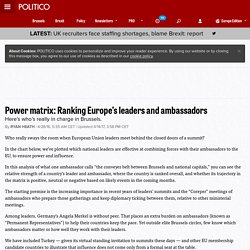 Posted on 4/28/16 | 9:49 AM CEST ironworker Quite interesting, I see (some of) the causes of internal “dysfunctionalities” behind “equal but different”(just me being an incurable idealist) whatever that means. Hungary seems “qualified” enough to reach top 10 Posted on 4/28/16 | 10:33 AM CEST Frank Molenaar I agree that this is something quite interesting. Posted on 4/28/16 | 11:28 AM CEST. Eastern borders of the EU. Eastern borders of the EU. Max Keiser. Keiser invented "Virtual Specialist Technology", a software system used by the Hollywood Stock Exchange. 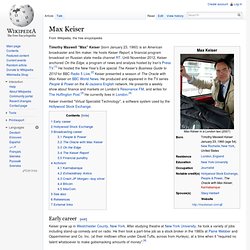 Early career[edit] The West continues to ‘underestimate’ Putin’s Russia and its imperial ambitions. Vladimir Putin’s ultimate aim might well be to re-establish Russia’s rule over the lands it held before the 1917 revolution – which would include Finland, the Baltic States and part of Poland as well as the former Soviet Union – warns Ian Bond In annexing Crimea, Russian President Vladimir Putin violated a powerful post-1945 taboo against incorporating other countries’ territory into your own. 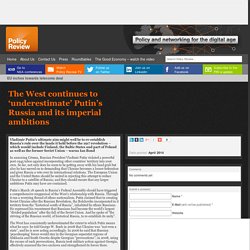 So far, not only does he seem to be getting away with his land grab but also he has moved on to demanding that Ukraine becomes a looser federation and gives Russia a veto over its international relations. The European Union and the United States should be united in rejecting this attempt to reduce Ukraine to a satellite of Russia; and they should ensure that any larger ambitions Putin may have are contained.

Politics Get short URL "We understand that the "color revolutions" phenomenon poses a certain threat. 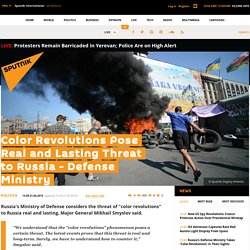 The latest events prove that this threat is real and long-term. Surely, we have to understand how to counter it," Smyslov said. The term "color revolutions" refers to coups instigated from the outside and characterized by widespread unrest in countries such as Georgia, Ukraine, Tunisia or Egypt. Coloring Outside The Lines They are believed to be conducted with the help of the United States and other Western countries, with the appointed leaders serving as a medium in advancing Western interests. Salutin' Putin: inside a Russian troll house.

Just after 9pm each day, a long line of workers files out of 55 Savushkina Street, a modern four-storey office complex with a small sign outside that reads “Business centre”. 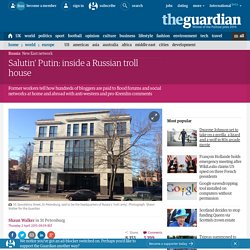 Having spent 12 hours in the building, the workers are replaced by another large group, who will work through the night. The nondescript building has been identified as the headquarters of Russia’s “troll army”, where hundreds of paid bloggers work round the clock to flood Russian internet forums, social networks and the comments sections of western publications with remarks praising the president, Vladimir Putin, and raging at the depravity and injustice of the west. My father was killed by Russian propaganda, says Nemtsov's daughter. 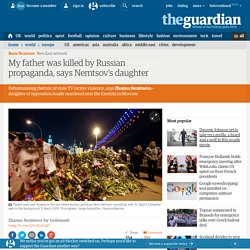 It kills reason and common sense but it also kills human beings. The tragic death of my father on 27 February was an act of political violence for which Russia’s state TV channels, among others, bear responsibility. For years, they stoked hatred towards him and other opposition figures, casting them as “national traitors”. What's it like to be hated by the Russian internet? Facing death threats and streams of abusive messages, some Russians are becoming increasingly targeted by rising levels of online vitriol. 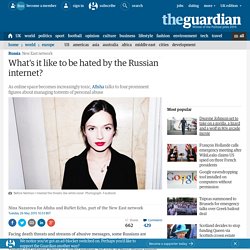 Trolling and internet abuse is a global problem, but each of these stories reveals how for some people working in Russia the digital sphere has become increasingly pernicious, with some saying it has become particularly bad since the annexation of Crimea. Russian magazine Afisha asked four prominent figures – a lawyer, a former US ambassador to Russia, an activist and a journalist – about how they deal with regular aggression and harassment online. ‘Before Nemtsov I treated the threats like white noise’ Karina Orlova, radio host, Echo of Moscow: The ‘Beauty’ of Russian Homophobia. This man threatened to attack random homosexuals. 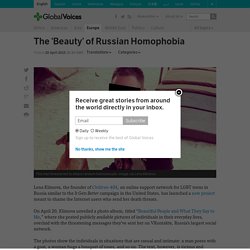 Image via Lena Klimova. Lena Klimova, the founder of Children-404, an online support network for LGBT teens in Russia similar to the It Gets Better campaign in the United States, has launched a new project meant to shame the Internet users who send her death threats. On April 20, Klimova unveiled a photo album, titled “Beautiful People and What They Say to Me,” where she posted publicly available pictures of individuals in their everyday lives, overlaid with the threatening messages they’ve sent her on VKontakte, Russia’s largest social network. 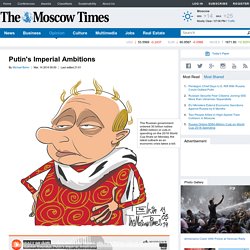 Putin’s far-right ambition: Think-tank reveals how Russian President is wooing – and funding – populist parties across Europe to gain influence in the EU - Europe - World - The Independent. In recent weeks, the Kremlin’s targets have included France’s xenophobic Front National (FN) party, and politicians from three German parties including the neo-Nazi National Democratic Party (NPD), the Eurosceptic Alternative for Germany (AfD) and the Social Democrats (SPD). Marine Le Pen’s Front National was recently granted a €9m (£7m) loan by a small financial institution called the First Czech-Russian Bank. The cash will be used to fund the party’s campaign for next year’s regional elections. French banks were unwilling to fund the FN. “We cast our the net wide: in Spain, in Italy, in Asia and in Russia,” Ms Le Pen told Le Monde.