01.08.1945 – 30.11.1949 COMMANDER MILITARY GOVERNMENT HQ 723 HAMELN » British Army in Hameln. © Arnd Wöbbeking How difficult it is to get data about a military government that arose shortly after one of the worst wars of mankind, I need not mention separately. 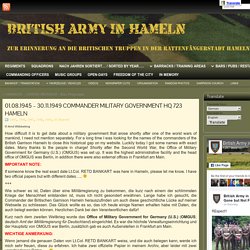 For a long time I was looking for the names of the commanders of the British Garrison Hameln to close this historical gap on my website. Luckily today I got some names with exact dates. Many thanks to the people in charge! Shortly after the Second World War, the Office of Military Government for Germany (U.S.) If someone know the real exact date Lt.Col. Wie schwer es ist, Daten über eine Militärregierung zu bekommen, die kurz nach einem der schlimmsten Kriege der Menschheit entstanden ist, muss ich nicht gesondert erwähnen.

Kurz nach dem zweiten Weltkrieg wurde das Office of Military Government for Germany (U.S.) Wenn jemand die genauen Daten von Lt.Col. Gefällt mir: Gefällt mir Lade … A moment that changed me – a chance encounter in war-torn Germany. I have lived almost 100 years and I am approaching the long night of nonexistence, but I am not afraid because I have survived much turmoil: the Great Depression, the second world war, the cold war, the deaths of friends and also the hardest blows to my spirit, the passing of my beloved wife and middle son. 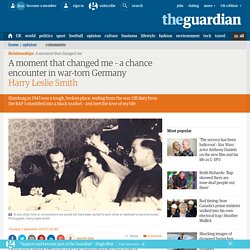 But now, as time dwindles down like a clock with an ageing battery, my heart still beats strong, content and free of rancour because of one single event that changed my life and forged a thousand moments of joy for me. It happened a long time ago, in the summer of 1945 when I was stationed in the city of Hamburg as part of the allied occupation force charged with enforcing the peace on a defeated German people. Because of allied air raids against it during the war, the city was like Gomorrah the day after God’s wrath. One day in August, I came upon a makeshift black market where German civilians bartered heirlooms for bread and meat and the chance to survive another day. Free German Workers' Party. The Free German Workers' Party (German: Freiheitliche Deutsche ArbeiterPartei, FAP) was a neo-nazi political association in Germany. 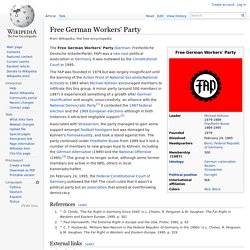 It was outlawed by the Constitutional Court in 1995. On February 24, 1995, the Federal Constitutional Court of Germany outlawed the FAP. The court ruled that it wasn't a political party but an association that aimed at overthrowing democracy. References[edit] Jump up ^ D. External links[edit] Party flag. Amazon.co. Hamelin Prison Reburials - Axis History Forum. Between 1945 and 1949, following a series of war crimes trials, the British executed a total of 202 alleged German war criminals. 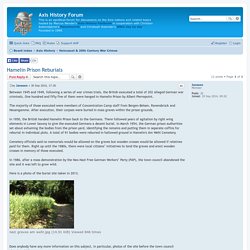 One hundred and fifty five of them were hanged in Hamelin Prison by Albert Pierrepoint. The majority of those executed were members of Concentration Camp staff from Bergen-Belsen, Ravensbrück and Neuengamme. After execution, their corpses were buried in mass graves within the prison grounds. In 1950, the British handed Hamelin Prison back to the Germans.

There followed years of agitation by right wing elements in Lower Saxony to give the executed Germans a decent burial. Cemetery officials said no memorials would be allowed on the graves but wooden crosses would be allowed if relatives paid for them. Stadthotel Hameln / Former Hamelin jail. Josef Kramer was the Commandant of the Bergen-Belsen concentration camp. 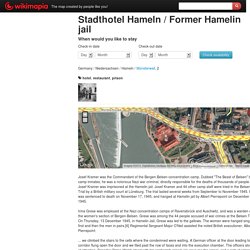 Dubbed "The Beast of Belsen" by camp inmates; he was a notorious Nazi war criminal, directly responsible for the deaths of thousands of people. Josef Kramer was imprisoned at the Hamelin jail. Josef Kramer and 44 other camp staff were tried in the Belsen Trial by a British military court at Lüneburg. The trial lasted several weeks from September to November 1945. He was sentenced to death on November 17, 1945, and hanged at Hamelin jail by Albert Pierrepoint on December 13, 1945. Hamelin. Hamelin (/ˈhæməlɨn/ or /ˈhæmlɨn/; German: Hameln) is a town on the river Weser in Lower Saxony, Germany. 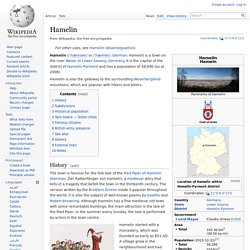 It is the capital of the district of Hamelin-Pyrmont and has a population of 58,696 (as at 2006). Hamelin is also the gateway to the surrounding Weserbergland mountains, which are popular with hikers and bikers. History[edit] 20th century - Permanent exhibition - Hamelin Museum - Culture - Education & Culture. Image comment: F.W. and K. 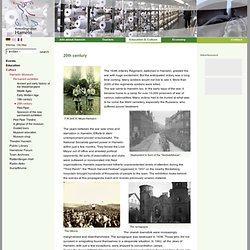 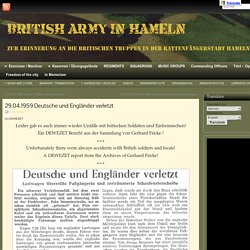