Love him or hate him, Ackman now runs the world’s top hedge fund. By Katrina Brooker Lunch was a bit awkward. 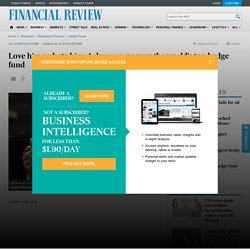 It was around 1pm on a warm ­October day in New York. A group of Wall Street investors were tucking into chicken in a red-wine sauce and Brussels sprouts at the Plaza Hotel. They’d convened for Jim Grant’s autumn conference, hosted by the influential editor of Grant’s Interest Rate Observer. Hedge Fund Managers Get Richest Quickest. Every hedge-fund manager talks of the risk-reward ratio. 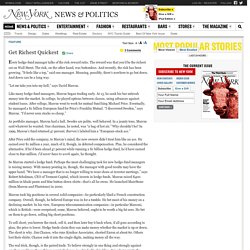 The reward was that you’d be the richest cat on Wall Street. The risk, on the other hand, was bottomless. And recently, the risk has been growing. “It feels like a top,” said one manager. Meaning, possibly, there’s nowhere to go but down. “Let me take you into my hell,” says David Marcus. Like many hedge-fund managers, Marcus began trading early. As portfolio manager, Marcus had a ball. After Price sold the company, to Marcus’s mind, the new owners didn’t treat him like an ace. So Marcus started a hedge fund. Marcus took big positions in several solid companies—he particularly liked a French construction company. Hedge Fund Managers Get Richest Quickest. Hedge Fund Managers Get Richest Quickest. The classic hedge-fund creation story concerns a young trader at an investment bank. 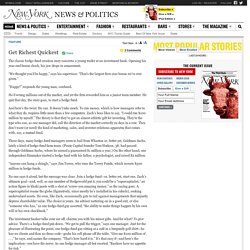 Opening his year-end bonus check, his jaw drops in amazement. “We thought you’d be happy,” says his supervisor. “That’s the largest first-year bonus we’ve ever given.” “Happy?” Responds the young man, confused. He’d wrung millions out of the market, and yet the firm rewarded him as a junior team member. And here’s the twist: He can. Sir Alfred Pease, 2nd Baronet. Sir Alfred Pease (centre) in 1909, hunting with former US President Theodore Roosevelt (right) and Roosevelt's son Kermit Early life[edit] Alfred was educated at Grove House School, Tottenham, and at Trinity College, Cambridge.[1] Career[edit] He began his career in the family bank, J. 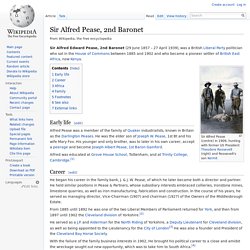 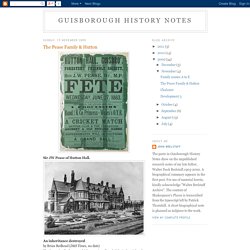 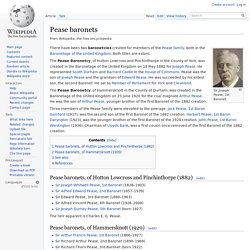 G. Pease. Pease baronets, of Hammersknott (1920)[edit] Pease family. The Pease family was a prominent English and mostly Quaker family associated with Darlington and County Durham and descended from Joseph Pease of Darlington, elder son of Edward Pease (1711–1785).[1][2] They were 'one of the great Quaker industrialist families of the nineteenth century, who played a leading role in philanthropic and humanitarian interests'.[3] The family earlier came from Fishlake, Yorkshire. 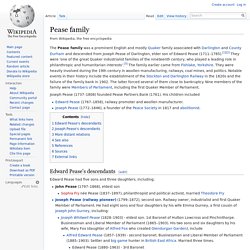 They were heavily involved during the 19th century in woollen manufacturing, railways, coal mines, and politics. Notable events in their history include the establishment of the Stockton and Darlington Railway in the 1820s and the failure of the family bank in 1902. The latter forced several of them close to bankruptcy. Nine members of the family were Members of Parliament, including the first Quaker Member of Parliament. Joseph Pease (1737–1808) founded Pease Partners Bank (1761). Welcome to Forbes. 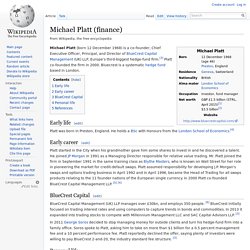 Bluecrest is a systematic hedge fund based in London. Platt was born in Preston, England. He holds a BSc with Honours from the London School of Economics.[4] Nichola Pease. Nichola Pease (born c. 1961) is a British fund manager. 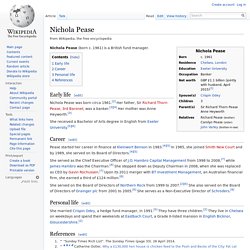 Early life[edit] Nichola Pease was born circa 1961.[2] Her father, Sir Richard Thorn Pease, 3rd Baronet, was a banker.[3][4] Her mother was Anne Heyworth.[3] She received a Bachelor of Arts degree in English from Exeter University.[5][6] Crispin Odey. Crispin Odey (born 12 October 1959)[2] is a London-based hedge fund manager and the founding partner of Odey Asset Management. 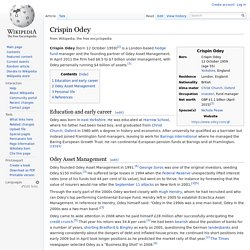 In April 2011 the firm had $6.5 to $7 billion under management, with Odey personally running $4 billion of assets.[3] Education and early career[edit] Odey was born in east Yorkshire. 10 Strange Stories About The Fascinating Guinness Family. Humans One of the most recognizable beers in the world, Guinness is a staple in every Irish pub and at every St. Patrick’s Day celebration. There have been songs and poems written about it, and there’s even a right way to pour it. But just as fascinating as the beer is the history of the family behind it. Members of the Guinness Family. Leakey family. The Leakey family is a British and Kenyan family consisting of a number of notable military figures and archaeologists of the 20th and 21st centuries.

Notable members[edit] Wall Street's Secret Society. How many gays and lesbians are there on Wall Street? James J. Cramer, the seemingly omnipresent and omniscient hedge-fund manager, can't name any. Jessica Reif Cohen, the top-ranked analyst of entertainment and media stocks, doesn't know any gays at her firm, Merrill Lynch, which has nearly 10,000 employees in New York City alone.

Within the broader community of research analysts, "there's only one person I even think is gay," she adds: a middle-aged guy who supposedly lives with his mother, a fact that has provoked gossip at his firm because "almost everyone else is married with children. " Double lives – a history of sex and secrecy at Westminster. From 1885, when the Labouchere amendment created the new offence of gross indecency, until 1967, when the recommendations of the Wolfenden committee were enacted, all homosexual behaviour was illegal in Britain.

It continued to attract intense social disapproval for long after that: as late as 1993, according to the annual British Social Attitudes survey, most people still considered it to be “always wrong”. In this cruel and illiberal atmosphere, politicians with gay inclinations had to keep them secret from the public at large, and ran enormous risks.