Uprising of 1953 in East Germany. Republikflucht. "Republikflucht" ("desertion from the republic") and "Republikflüchtling(e)" ("deserters from the republic") were the terms used by authorities in the German Democratic Republic (GDR – East Germany) to describe the process of and the person(s) leaving the GDR for a life in West Germany or any other Western (non-Warsaw Pact) country (Eastern Bloc emigration and defection). 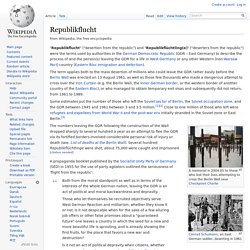 The term applies both to the mass desertion of millions who could leave the GDR rather easily before the Berlin Wall was erected on 13 August 1961, as well as those few thousands who made a dangerous attempt to cross over the Iron Curtain (e.g. the Berlin Wall, the Inner German border, or the western border of another country of the Eastern Bloc), or who managed to obtain temporary exit visas and subsequently did not return, from 1961 to 1989. A memorial in 2004-05 to those who lost their lives attempting to cross the Berlin Wall near Checkpoint Charlie References[edit] Further reading[edit] External links[edit]

1955: Elli Barczatis and Karl Laurenz, East Berlin spies. November 23rd, 2013 Headsman On this date in 1955, the East German Prime Minister’s own chief secretary was beheaded as a spy, along with her lover. 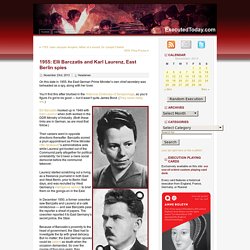 You’ll find this affair blurbed in the Historical Dictionary of Sexspionage, so you’d figure it’s got to be good — but it wasn’t quite James Bond. (They never really are.) Elli Barczatis (top) and Karl Laurenz Elli Barczatis hooked up in 1949 with Karl Laurenz when both worked in the DDR Ministry of Industry. Their careers went in opposite directions thereafter. Laurenz started scratching out a living as a freelance journalist in both East and West Berlin, prior to Berlin Wall days, and was recruited by West Germany’s intelligence service to brief them on the goings-on in the East.

In December 1950, a former coworker saw Barczatis and Laurenz at a cafe rendezvous — and saw Barczatis pass the reporter a sheaf of papers. Because of Barczatis’s proximity to the head of government, the Stasi had to investigate the tip with great delicacy. 1960: Manfred Smolka, East German border guard. July 12th, 2013 Headsman. 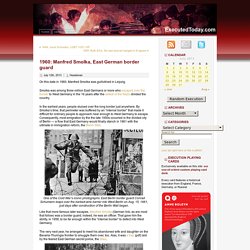 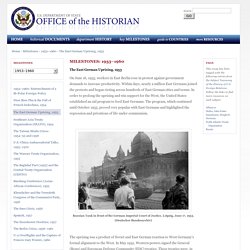 Within days, nearly a million East Germans joined the protests and began rioting across hundreds of East German cities and towns. East Germany. East Germany (in German Ostdeutschland) was the common English name for the former German Democratic Republic (in German, Deutsche Demokratische Republik, or GDR), a communist state which existed from its founding on October 7, 1949, to October 3, 1990. 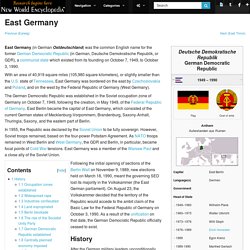 Feature: The Stasi 'romeos' of West Germany during the cold war. Gabriele Kliem remembers everything about the day Frank Dietzel walked into her life. 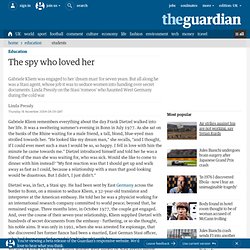 It was a sweltering summer's evening in Bonn in July 1977. As she sat on the banks of the Rhine waiting for a male friend, a tall, blond, blue-eyed man strolled towards her. "He looked like my dream man," she recalls, "and I thought, if I could ever meet such a man I would be so, so happy. I fell in love with him the minute he came towards me. " Dietzel introduced himself and told her he was a friend of the man she was waiting for, who was sick. Dietzel was, in fact, a Stasi spy. We do not know exactly how many women were duped by Stasi agents during the cold war. Contemporary Witnesses. Contact with contemporary witnesses is very important to the work of the memorial. 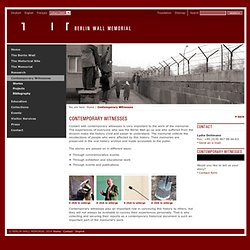 The experiences of everyone who saw the Berlin Wall go up and who suffered from the division make the history vivid and easier to understand. The memorial collects the recollections of people who were affected by this history. Their memories are preserved in the oral history archive and made accessible to the public. The stories are passed on in different ways: Through commemorative events Through exhibition and educational workThrough events and publications Contemporary witnesses play an important role in conveying this history to others, but they will not always be available to convey their experiences personally. Escape from East Berlin. I arrived in Berlin in 1959, two years before the building of the wall. 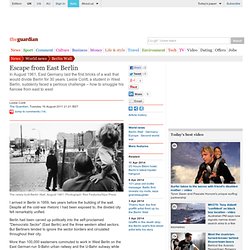 Despite all the cold-war rhetoric I had been exposed to, the divided city felt remarkably unified. Berlin had been carved up politically into the self-proclaimed "Democratic Sector" (East Berlin) and the three western allied sectors. But Berliners tended to ignore the sector borders and circulated throughout their city. More than 100,000 easterners commuted to work in West Berlin on the East German-run S-Bahn urban railway and the U-Bahn subway while some 10,000 West Berliners – from highly paid surgeons to theatre and opera personnel – still worked in East Berlin.