The Gambler Who Blew $127 Million. Andrew Black (gambling entrepreneur) - Wikipedia. Black and Wray launched Betfair in 2000, having secured £1m of investment from friends and family, having had requests for venture investment rejected by VC funds that they had approached. 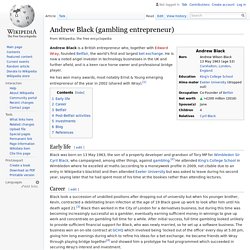 Other bet exchanges launched at the same time, but worked on the basis of offering single bets which interested punters would then accept individually. Betfair operated on a model more similar to a financial exchange, allowing among other things, multiple small bets to fill a position offered by a gambler wishing to place a large stake on a wager. This approach, combined with the acquisition of rival Flutter in 2001, secured Betfair 90% of the bet exchange market in the UK within a few years of launch.

How does it feel to lose £2million in a night's gambling? With his rotund girth, expensive suits and deep pockets, the Syrian billionaire known in gaming circles as the 'Fat Man' was instantly recognisable to the casino staff. 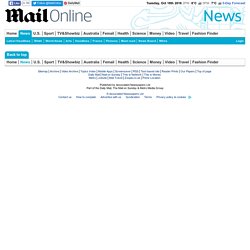 Stepping inside the doors of Aspinalls, the most glamorous of the elite gambling establishments which make up Mayfair's so-called 'Golden Triangle', Fouad al-Zayat was whisked to his usual private room by fawning attendants. More here... • 'Fat Man' gambler who refused to honour £2m debt is told to pay up. This Man Won $15M at Blackjack, How Did He Do It? The Truth about Betting Systems - Wizard of Odds. Not only do betting systems fail to beat casino games with a house advantage, they can’t even dent it. 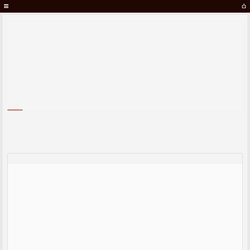 Roulette balls and dice simply have no memory. Every spin in roulette and every toss in craps is independent of all past events. In the short run you can fool yourself into thinking a betting system works, by risking a lot to win a little. However, in the long run no betting system can withstand the test of time. The longer you play, the ratio of money lost to money bet will get closer to the expectation for that game.

In the many years that run this site I have received thousands of e-mails from believers in betting systems. Five of London's best high-roller casinos. The site of the original Crockfords, established in 1827. 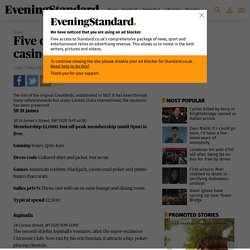 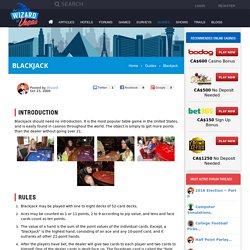 It is the most popular table game in the United States, and is easily found in casinos throughout the world. The object is simply to get more points than the dealer without going over 21. Rules Blackjack may be played with one to eight decks of 52-card decks. Hand Signals The player cards in blackjack are usually dealt face up, but in single-deck and double-deck games, they are dealt face down. Hit: In a face-up game, tap the table with your finger. Wizard's Simple Strategy Through the years, I've learned that very few people have the will to memorize how to play every possible situation in blackjack.

If you are not familiar with the terminology, a "hard" hand is one that has no aces, or one where aces are forced to count as one point, lest the hand bust. An "N" indicates the player should not split. With a total of hard 10 or 11, the player should double if he has more points than the dealer. Basic Strategy. Blackjack Pros Tell of their Biggest Wins and Losses. Winners and Losers: True Tales From the Blackjack Trenches. 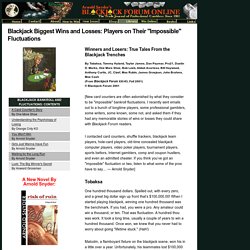 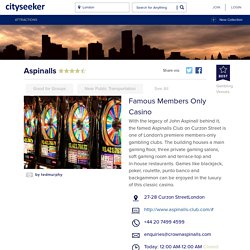