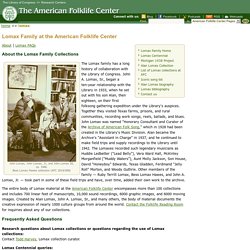 John A. Lomax, Sr., began a ten-year relationship with the Library in 1933, when he set out with his son Alan, then eighteen, on their first folksong gathering expedition under the Library's auspices. Together they visited Texas farms, prisons, and rural communities, recording work songs, reels, ballads, and blues. The entire body of Lomax material at the American Folklife Center encompasses more than 100 collections and includes 700 linear feet of manuscripts, 10,000 sound recordings, 6000 graphic images, and 6000 moving images. Frequently Asked Questions Research questions about Lomax collections or questions regarding the use of Lomax collections: Contact Todd Harvey, Lomax collection curator. 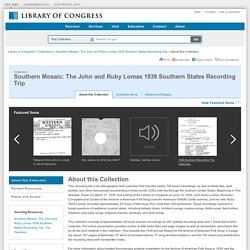 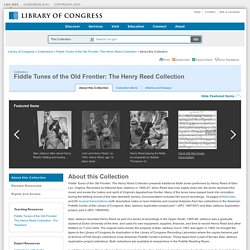 Recorded by folklorist Alan Jabbour in 1966-67, when Reed was over eighty years old, the tunes represent the music and evoke the history and spirit of Virginia's Appalachian frontier. Many of the tunes have passed back into circulation during the fiddling revival of the later twentieth century. Documentation includes184 sound recordings, 19 pages of fieldnotes, and 69 musical transcriptions (with descriptive notes on tune histories and musical features) from two collections in the American Folklife Center at the Library of Congress: Alan Jabbour duplication project part 1 (AFC 1967/007) and Alan Jabbour duplication project, part 2 (AFC 1969/008).

Folk-Songs of America: The Robert Winslow Gordon Collection, 1922-1932 (The American Folklife Center, Library of Congress) By Michael Taft As part of its celebration of the 75th anniversary of the Archive of Folk Culture (July 1, 2003), the American Folklife Center is re-issuing these recordings from the Robert Winslow Gordon Collection. 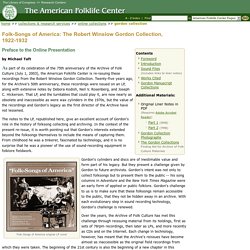 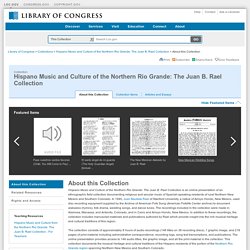 Rael Collection is an online presentation of an ethnographic field collection documenting religious and secular music of Spanish-speaking residents of rural Northern New Mexico and Southern Colorado. The Child Ballads Index. Sacred Texts Legends & Sagas England The ultimate Child ballad etext has yet to be constructed. 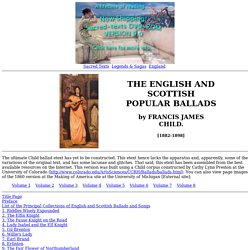 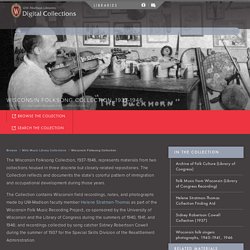 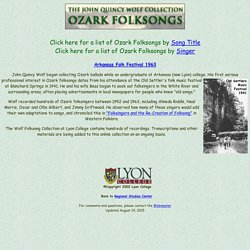 His first serious professional interest in Ozark folksongs dates from his attendance at the Old Settler's folk music festival at Blanchard Springs in 1941. He and his wife Bess began to seek out folksingers in the White River and surrounding areas, often placing advertisements in local newspapers for people who knew "old songs. " Wolf recorded hundreds of Ozark folksingers between 1952 and 1963, including Almeda Riddle, Neal Morris, Oscar and Ollie Gilbert, and Jimmy Driftwood.

He observed how many of these singers would add their own adaptations to songs, and chronicled this in "Folksingers and the Re-Creation of Folksong" in Western Folklore. Kodály Center — The American Folk Song Collection. The Ballad Index - Welcome (TOC) An Annotated Bibliography of the Folk Songs of the English-Speaking World. 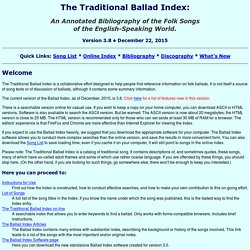