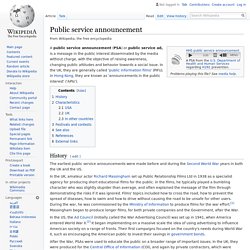 In the UK, they are generally called 'public information films' (PIFs); in Hong Kong, they are known as 'announcements in the public interest' ('APIs'). History[edit] The earliest public service announcements were made before and during the Second World War years in both the UK and the US. In the US, the Ad Council (initially called the War Advertising Council) was set up in 1941, when America entered World War II.[2] It began implementing on a massive scale the idea of using advertising to influence American society on a range of fronts. PUBLIC SERVICE ADVERTISING. The Federal Communications Commission (FCC) defines a PSA as "any announcement for which no charge is made and which promotes programs, activities, or services of federal, state, or local governments (e.g., recruiting, sale of bonds, etc.) or the programs, activities or services of non-profit organizations (e.g., United Way, Red Cross blood donations, etc.) and other announcements regarded as serving community interests, excluding time signals, routine weather announcements and promotional announcements. 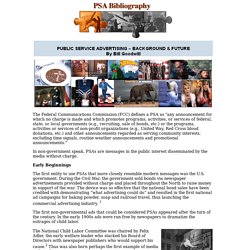 " In non-government speak, PSAs are messages in the public interest disseminated by the media without charge. Early Beginnings The first entity to use PSAs that more closely resemble modern messages was the U.S. government. During the Civil War, the government sold bonds via newspaper advertisements provided without charge and placed throughout the North to raise money in support of the war. Early Seeds of Public Relations. All About Public Service Announcements // ACEP. The old adage about a free lunch is also true about free media—there’s no such thing. 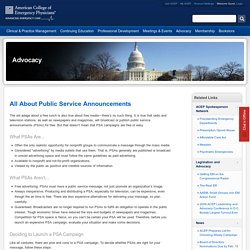 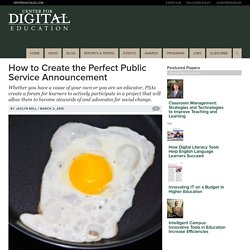 That's the central question asked when you are creating a public service announcement (PSA), which is any message promoting programs, activities or services of federal, state or local governments or the programs, activities or services of non-profit organizations. Often in the form of commercials and print ads, PSAs are created to persuade an audience to take a favorable action. PSAs can create awareness, show the importance of a problem or issue, convey information, or promote a behavioral change. Whether you have a cause of your own or you are an educator, PSAs create a forum for learners to actively participate in a project that allows them to become stewards of — and advocates for — social change. Section 7. Preparing Public Service Announcements. What is a public service announcement? 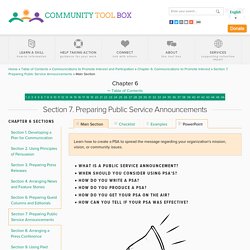 When should you consider using PSA's? How do you write a PSA?