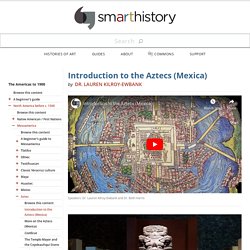 Lauren Kilroy-Ewbank and Dr. Beth Harris If you travel to Mexico City today, chances are you might visit museums such as the Templo Mayor Museum in the heart of the city or the National Museum of Anthropology in Chapultepec Park. Either is sure to dazzle you with an impressive array of exquisitely crafted objects (that we typically label as “artworks”), ranging from monumental stone sculptures and shell mosaics to colorfully painted ceramics and figurines. At both museums, Aztec art is the centerpiece: excavations at the Aztec Templo Mayor fill the onsite museum, and Aztec art similarly occupies the central galleries within the Anthropology museum. Alexander von Humboldt,”Basalt Relief representing the Mexican Calendar,” plate VIII from Vues des Cordillères et monumens des peuples indigènes de l’Amérique, 1814-40 (Paris: G.

What’s in a name? The German explorer and scientist Alexander von Humboldt arrived in Mexico in 1803 after traveling throughout parts of Latin America. Aztec History For Kids. Aztec beliefs › The Aztecs believed in many gods, but mainly worshipped the sun god. 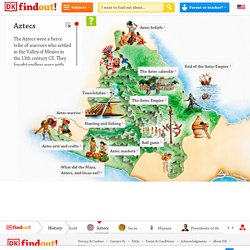 They performed human sacrifices in order to keep the gods happy. Aztec beliefs › End of the Aztec Empire › Spanish invaders arrived in Tenochtitlán in 1519. End of the Aztec Empire › Tenochtitlán › The city of Tenochtitlán was built on an island in Lake Texcoco. Tenochtitlán › Aztec arts and crafts › Aztec craftsmen were very skilled stoneworkers, and were good at carving stone figures and objects. Aztec arts and crafts › What did the Maya, Aztecs, and Incas eat? Corn (maize) was the central food in their diet, along with vegetables such as beans and squash. What did the Maya, Aztecs, and Incas eat? The Aztec empire of Mexico and its civilization - society, economy, religion. Contents Geography: the Aztec homeland Historical Overview OriginsAn expanding capitalAn expanding empire. 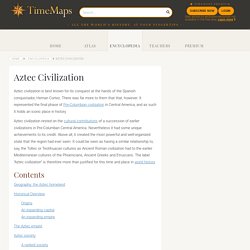 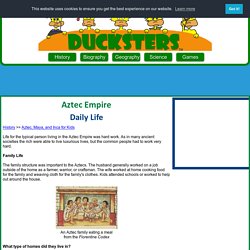 As in many ancient societies the rich were able to live luxurious lives, but the common people had to work very hard. Family Life The family structure was important to the Aztecs. The husband generally worked on a job outside of the home as a farmer, warrior, or craftsman. An Aztec family eating a meal from the Florentine Codex What type of homes did they live in? Wealthy people lived in homes made of stone or sun-dried brick.

Poor people lived in smaller one or two room huts that had thatched roofs made from palm leaves. What did the Aztecs wear for clothes? The Aztec men wore loincloths and long capes. There were rules in Aztec society regarding clothing. What did they eat? The main staple of the Aztec diet was maize (similar to corn). Did they go to school? All Aztec children were required by law to attend school. Boys and girls went to separate schools. Marriage Games Works Cited.