Kids History: Timeline of Ancient China. History for Kids >> Ancient China 8000 - 2205 BC: Early Chinese settlers build small villages and farm along the major rivers including the Yellow River and the Yangtze River. 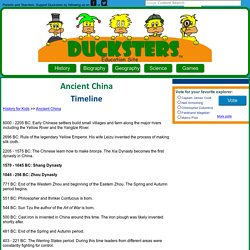 Ancient China. China is a country in East Asia whose culture is considered the oldest, still extant, in the world. 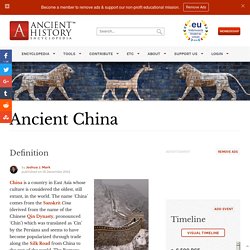 The name `China’ comes from the Sanskrit Cina (derived from the name of the Chinese Qin Dynasty, pronounced `Chin’) which was translated as `Cin’ by the Persians and seems to have become popularized through trade along the Silk Road from China to the rest of the world. The Romans and the Greeks knew the country as `Seres’, “the land where silk comes from”. The name `China’ does not appear in print in the west until 1516 CE in Barbosa’s journals narrating his travels in the east (though the Europeans had long known of China through trade via the Silk Road). Marco Polo, the famous explorer who familiarized China to Europe in the 13th century CE, referred to the land as `Cathay’. In Mandarin Chinese, the country is known as `Zhongguo” meaning `central state’ or `middle empire’. Pre-History. Ancient China for Kids and Teachers - Ancient China for Kids. Shang Dynasty — China's First Recorded History. Lu Yanguang Fuhao, the first woman to appear in Chinese written history, commanded an army of 10,000 soldiers during the Shang dynasty. 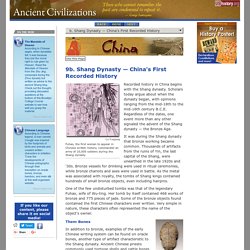 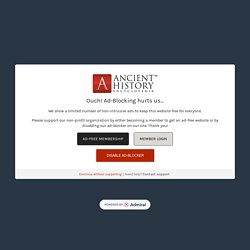 It followed the Shang Dynasty (c. 1600-1046 BCE) and it finished when the army of the state of Qin captured the city of Chengzhou in 256 BCE. The long history of the Zhou Dynasty is normally divided in two different periods: Western Zhou (1046-771 BCE) and Eastern Zhou (770-256 BCE), so-called following the move of the Zhou capital eastwards where it was safer from invasion. The most influential minds in the Chinese intellectual tradition flourished under the Zhou, particularly towards the last period of the Zhou Dynasty, considered a time of intellectual and artistic awakening. Many of the ideas developed by figures like Laozi, Confucius, Mencius and Mozi, who all lived during the Eastern Zhou period, would shape the character of Chinese civilization up to the present day. The Qin Dynasty - Ancient China for Kids. The Qin Dynasty only lasted for 15 years. 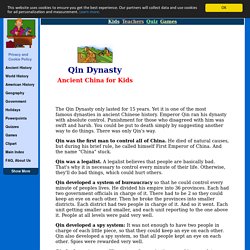 Yet it is one of the most famous dynasties in ancient Chinese history. Emperor Qin ran his dynasty with absolute control. Punishment for those who disagreed with him was swift and harsh. You could be put to death simply by suggesting another way to do things. There was only Qin's way. Qin was the first man to control all of China. Qin was a legalist.

Qin developed a system of bureaucracy so that he could control every minute of peoples lives. Qin developed a spy system: It was not enough to have two people in charge of each little piece, so that they could keep an eye on each other. Qin had great power. The Han Dynasty of Ancient China - TimeMaps. Introduction to the Han dynasty (article) Han Dynasty — Cultural Heights. The giant panda lived for centuries in China's bamboo forests, and were regarded as semi-divine during the Han dynasty. 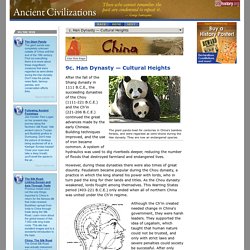 They are now an endangered species. After the fall of the Shang dynasty in 1111 B.C.E., the succeeding dynasties of the Chou (1111-221 B.C.E.) and the Ch'in (221-206 B.C.E.) continued the great advances made by the early Chinese. Building techniques improved, and the use of iron became common. A system of hydraulics was used to dig riverbeds deeper, reducing the number of floods that destroyed farmland and endangered lives.

However, during these dynasties there were also times of great disunity. The ancient Chinese healing systems of acupuncture and acupressure use diagrams of points, called meridians, to direct energy flow throughout the body. Although the Ch'in created needed change in China's government, they were harsh leaders.