2017 Summer Reading Guide – Modern Mrs. Darcy. Kick off YOUR summer with this curated guide to the best summer reads. 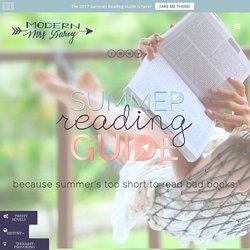 Anyone can browse a best seller list, but those lists don't help you decide if those are the right books for YOU. That's why this is the SIXTH year we're sharing our MMD Summer Reading Guide. These are my hand-picked top reads for the season. I've read every book in it, front to back, and can tell you why each title may or may not be the right book for YOU. Amazon has millions of books, your local bookstore has thousands, but this guide has just 30 handpicked titles—that's 5 books each over 6 categories--so you can bypass the duds and go straight to the good stuff.

I'm especially excited about our reading list feature, new for 2017. A quick note about the titles listed here: this guide is editorially driven. This guide is so much fun to put together and I'm so happy to share it with you. Happy reading, everyone! Books Through Bars: Donate Books. We couldn’t exist without book donations! 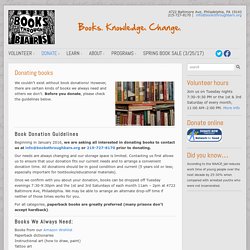 However, there are certain kinds of books we always need and others we don’t. Before you donate, please check the guidelines below. Book Donation Guidelines Beginning in January 2016, we are asking all interested in donating books to contact us at info@booksthroughbars.org or 215-727-8170 prior to donating. Our needs are always changing and our storage space is limited. Search results - "birthday" - NYPL Digital Collections. The Best Human Rights Books of 2016 – Kong Tsung-gan / 江松澗 – Medium. The best human rights books of 2016 East West Street: On the Origins of “Genocide” and “Crimes Against Humanity”, Philippe Sands (Knopf, May 24, 2016) Sands’ book reads like a labor of love, about both his family and his vocation as international human rights lawyer. 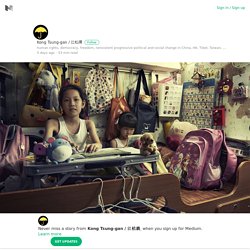 It is a tribute to two remarkable people, Hersch Lauterpacht and Raphael Lemkin, whom Sands characterizes as representing two different approaches to international humanitarian law, Lemkin pushing for genocide, Lauterpacht for crimes against humanity. How to Understand the Struggle for Black Freedom After Emancipation. “My visit to the National Museum of African American History and Culture served as a professional and personal high point,” says Erica Armstrong Dunbar, a professor of history at the University of Delaware, who discusses the museum in this issue. 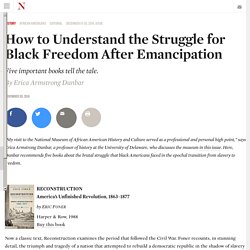 Here, Dunbar recommends five books about the brutal struggle that black Americans faced in the epochal transition from slavery to freedom. RECONSTRUCTION America’s Unfinished Revolution, 1863–1877 by Eric Foner Harper & Row, 1988Buy this book Now a classic text, Reconstruction examines the period that followed the Civil War. TO ’JOY MY FREEDOM Southern Black Women’s Lives and Labors After the Civil War by Tera W. Harvard University Press, 1998Buy this book After the Civil War, black men and women created their lives anew as free people, often taking to the open road in the attempt to distance themselves from their memories of slavery and the cotton fields. Our alternative list of Himalayan authors. We were intrigued by Robert Twigger’s Top 10 books about the Himalayas (theguardian.com, 9 November), which consists almost entirely of books by foreign travellers and mountaineers. 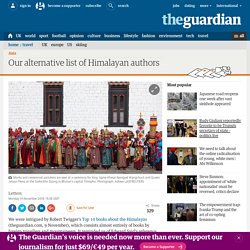 It reminded us of Edward Said’s reference, in Orientalism, to the western belief that “the Orient” cannot represent itself but must submit to understandings of itself drawn from the descriptions of others. . • Join the debate – email guardian.letters@theguardian.com. What to Read When You're Missing Downton Abbey. I was late to the Downton Abbey party. 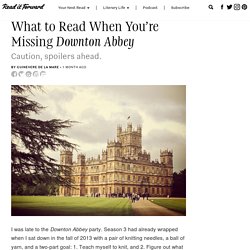 Season 3 had already wrapped when I sat down in the fall of 2013 with a pair of knitting needles, a ball of yarn, and a two-part goal: 1. Teach myself to knit, and 2. Beach reads –summer reading list 2016 - Washington Post. The Making of 'To the Bright Edge of the World': Eowyn Ivey Talks with Her Editors. Eowyn Ivey (Photo Credit: Stephen Nowers), Reagan Arthur, and Mary-Anne Harrington Eowyn Ivey follows up The Snow Child, a finalist for the Pulitzer Prize, with the excellent To the Bright Edge of the World. 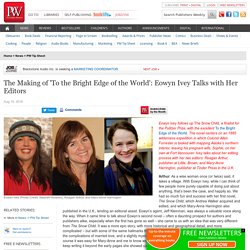 The novel centers on an 1885 wilderness expedition in which Colonel Allen Forrester is tasked with mapping Alaska’s northern interior, leaving his pregnant wife, Sophie, on her own at Fort Vancouver. Ivey talks about her editing process with her two editors: Reagan Arthur, publisher at Little, Brown, and Mary-Anne Harrington, publisher at Tinder Press in the U.K. Arthur: As a wise woman once (or twice) said, it takes a village. Author Eowyn Ivey talks about Russian fairy tales, building snowmen and the bond between reading and magic. About The Author. 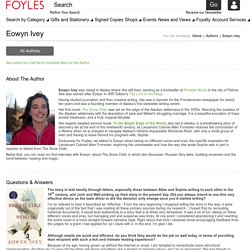 Eowyn Ivey: ‘I feel like I’ve always been trying to understand Alaska’ Eowyn Ivey’s debut novel, The Snow Child, earned her a place as a finalist for the Pulitzer prize for fiction as well as becoming an international bestseller. 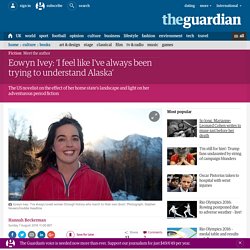 Her new book, To the Bright Edge of the World, tells the story of a late 19th-century expedition into the Alaska wilderness. Ivey lives in Alaska with her husband and two children. Your new novel follows a military expedition to map Alaskan territory in 1885. How much of that story is based in historical fact? A fair amount. The Bookshelf. By Jennifer Thompson-Cannino and Ronald Cotton (2009) Even if you’ve never read this book, you will be blown away by its premise: in 1984, when Thompson-Cannino was a 22-year-old student at Elon College, her life changed forever when her apartment was broken into and she was raped at knifepoint by a stranger — a man she identified in court, with absolute certainty, as Ronald Cotton. 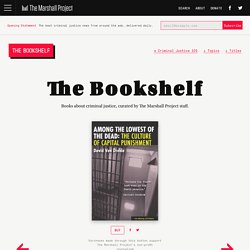 But it wasn’t Cotton. When DNA tests exonerated Cotton after more than a decade in prison, he and Thompson-Cannino developed a most remarkable and unlikely friendship. Together, they became activists fighting against wrongful convictions. The 100 Greatest Beach Books Ever. The 50th-anniversary reissue of Valley of the Dolls has prompted a flood of celebrations of Jacqueline Susann's supposedly disposable chronicle of pill-popping. One reason for that novel's enduring popularity?

Its status as an all-time-great Beach Read. That's a slippery category, but the formula is pretty straightforward. Whether mass-market candy or high literature, a beach read needs narrative momentum, a transporting sense of place, and, ideally, a touch of the sordid. 2015 Summer Reading List Grade 12. Shantideva way of bodhisattva. Around the World in 80 Books: A Global Reading List. Ready for some serious armchair travel? Here are the 2016 L.A. Times Book Prize winners.

Since 1980, the Los Angeles Times Book Prizes have honored the previous year's best books and their authors at the Los Angeles Times Festival of Books. In addition to previously announced winners Juan Felipe Herrera and James Patterson, this year's event highlighted some of 2015's best and brightest works, including novels, biographies and poems covering a variety of topics including assassinations and drug cartels, and lost environments and unsung environmentalists.

From Julia Child to Joan Didion to Robin Coste Lewis, these writers set the standard for exceptional American Literature. Thebookofpears.fruitforum. Best Books of 2015. 100 Notable Books of 2015. Photo The year’s notable fiction, poetry and nonfiction, selected by the editors of The New York Times Book Review. This list represents books reviewed since Dec. 7, 2014, when we published our previous Notables list. Fiction & Poetry BEATLEBONE. By Kevin Barry. THE BEAUTIFUL BUREAUCRAT. BEAUTY IS A WOUND. Search results. 13 Books to Read if You Loved 'All the Light We Cannot See' The Hidden Genre Genius of 20 Books. » 17 Brilliant Short Novels You Can Read in a Sitting. This week author Ian McEwan expressed his love of short novels, saying “very few [long] novels earn their length.” Certainly it seems like a novel has to be a minimum of 500 pages to win a major literary award these days, and many genre novels have ballooned to absurd sizes.

I love a good tome, but like McEwan many of my favorite novels are sharpened little gems. Amazon. The Library’s Top 15 of 2014 in Fiction, Mystery, and Nonfiction. What follows are the most circulated books at the Library in 2014. You can revisit the most popular books of 2013 here. The Brief Wondrous Life of Oscar Wao declared 21st century’s best novel so far. Finalists for the National Book Critics Circle Awards Are Announced. Photo. 20 Books We'll Read in 2015. The Best Books of 2014. Sometimes You Can't Pick Just 10: Maureen Corrigan's Favorite Books Of 2014. All 339 Books Referenced In "Gilmore Girls"

2015 Books We Can't Wait To Read. Best Books of 2014. If You Like This Book By A Man, You'll Love This Book By A Woman. Books that have stayed with us. Have you read the 200 'best American novels'? High Peaks Pure Earth – High Peaks Pure Earth Summer 2014 Reading List. Reading Guide: Novels About World War One. 13 Podcasts That Love Books As Much As You Do. Podcast. The Audio Book Club. The Top 24 Summer Books of 2014. All-TIME 100 Novels. Olmenta. 18 (Free) Books Ernest Hemingway Wished He Could Read Again for the First Time. Weatherhead East Asian Institute: Modern Tibetan Studies. What should I read next. 100 Books To Read In A Lifetime. 100 Notable Books of 2013. The Book List Challenge. How many have you read? Best Books of 2013.

BBC Believes You Only Read 6 of These Books...