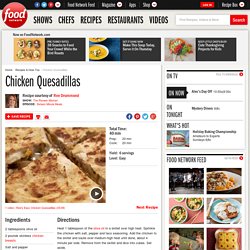 When the tortilla is golden on the first side, carefully flip the quesadilla to the other side, adding another 1/2 tablespoon butter to the skillet at the same time. Cut each quesadilla into wedges and serve with Pico de Gallo. Pico de Gallo: Dice up equal quantities of tomatoes and onions. Now, slice 1 or 2 jalapenos in half. Slice the lime in half and squeeze the juice from half the lime into the bowl. 2012 Ree Drummond, All Rights Reserved. Lightened up Buffalo Chicken Quesadillas. Stir Fry Chicken Lo-Mein Recipe. 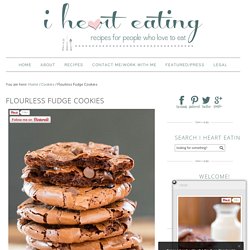 For some reason, when I eat raspberries, I need some chocolate to go with them. I couldn’t decide between cookies and brownies, so I made these Flourless Fudge Cookies. They are light and crisp at the edges, like a meringue cookies. Healthy Chicken Burrito. I’m not sure what happened. 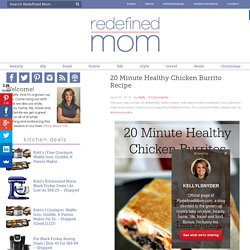 I blame my children. I went from the wife and mother who used to love to create an award-winning meal to a wife and mother who has exactly 27 minutes to prepare a meal that no one will complain about before we go to our next activity. Cooking and meal preparation has changed in our house. Ranch Chicken. We LOVE this chicken! 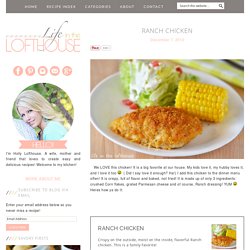 It is a big favorite at our house. My kids love it, my hubby loves it, and I love it too ( Did I say love it enough? Ha!) Milky Way Cookies. Angel Food Cupcakes. Share on Pinterest The cupcakes of Heaven. 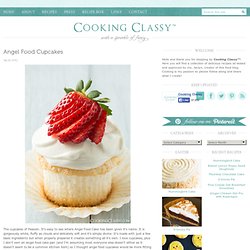 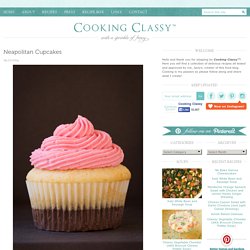 They are soft as clouds and layered with three irresistible flavors. A milk chocolate like cupcake, a vanilla bean cupcake and a fresh strawberry frosting. I just couldn’t get enough of them! Chocolate Cupcakes with Fluffy Mint Chocolate Chip Buttercream Frosting. Share on Pinterest Forget mint chocolate chip ice cream. 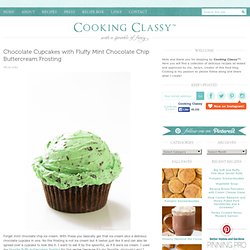 With these you basically get that ice cream plus a delicious chocolate cupcake in one. Strawberry Cupcakes with Strawberry Buttercream Frosting. Share on Pinterest I know, I post a ridiculous amount of cupcakes. 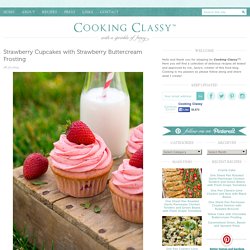 But really, can you blame me? Ranch Dressing II Recipe. Chicken Bacon Ranch Pasta. This dish was completely inspired by my husband. 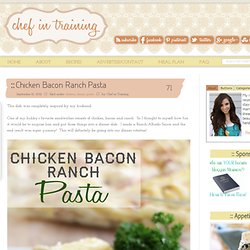 One of my hubby’s favorite sandwiches consists of chicken, bacon and ranch. So I thought to myself how fun it would be to surprise him and put those things into a dinner dish. I made a Ranch-Alfredo Sauce and the end result was super yummy! This will definitely be going into our dinner rotation! By Chef in Training September 10, 2012 Course: EntréeSkill Level: Easy. Simple Coconut Chicken Curry. Dinner tonight? 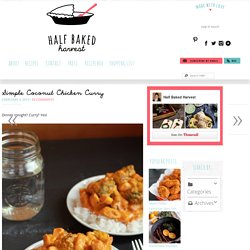 A sweet and tangy watermelon lime sorbet is a great way to cool off in the summer. As a bonus, this recipe is frozen back in the watermelon rind and cut off into slices. It’s hot. The type of heat where when you step outside the door and your skin is wet before the door swings shut behind you. It’s a hot that hangs in the air, letting you breathe it in, that is cured only by two things: being completely immersed in water or hiding indoors, the air conditioning cranked as far as it will go.I find that the heat makes me very unmotivated to do things like take a walk, water and weed the garden (though I have forced that one on myself) and prepare food and eat it.

However, when the promise of cooking provides ice cold watermelon sorbet, I just may be convinced. When your simple syrup is cool and watermelon chunked, blend them together in a food processor or blender until smooth. Cool the liquid completely in the refrigerator for a few hours. This then goes into the freezer. Buffalo Chicken Wing Sauce Recipe. Cucumber Lemon Mint Water Recipe. Last year, when I was pregnant, I basically became a camel. I always had a water bottle within reach and I made sure to drink enough water all the time {and the pregnancy-induced bathroom breaks proved it}.

Since having Zac, I’ve had so many things to think about at all times that I have let my water consumption fall far down the list of things I need to be concerned with. However, it’s been well over 100 degrees, even on rainy days, and my body is starting to get mad at me for neglecting it. Award Winning Chili Con Carne Recipe. Basic Pie Dough Recipe. Cinnamon Crescent Twists. Do you kids ask for food ALL. DAY. LONG? Mine do. I admit it gets a little annoying, but we finally set up some snack bins in the pantry that the kids know they are always allowed to have if they just ask.