Double Exposure: Canon vs. Nikon. Such Is Life - Such Is Life No kid can resist a mud puddle! ALERT: The Facebook Phonebook Is A Feature, Not A Threat. Facebook IQ examined how the emergence of streaming affected television viewers’ expectations for availability and pricing of content. 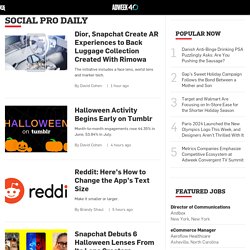 Remember that video you started watching on Facebook but never finished because you got distracted by something else? Facebook does. Oculus VR Friday announced new social features for the Samsung Gear VR: more video content for its Oculus Rooms feature, including 360-degree videos, as well as the launch of the Oculus Events feature, the ability to livestream directly to Facebook and Oculus Voice speech recognition. Free Screen Cleaner. Elk Stuns Idaho zookeepers… Zookeepers at Pocatello Zoo, Idaho, were worried when they noticed Shooter, a four-year-old elk, acting strangely at his water trough.Baffled, they watched as the animal – which is so massive some keepers are afraid to even enter his enclosure – tried to dip his hooves into his drinking trough, before attempting to dunk his whole head in the water. 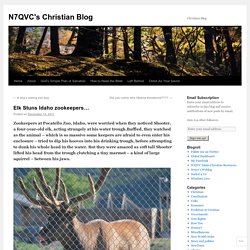 But they were amazed as 10ft tall Shooter lifted his head from the trough clutching a tiny marmot – a kind of large squirrel – between his jaws. Mammoth: Shooter the elk stands 10ft tall from his hooves to the tip of his antlers To the rescue! Everything You Know About Copyright Is About To Change - Brad Holland. Otters at Chester zoo - petes b'day 2008.