5 Things You Need to Know About Light : Indy News November 12, 2012. 15 Tips for Filming and Editing Marketing Videos. Lately, I haven’t been blogging as much here at WordStream. 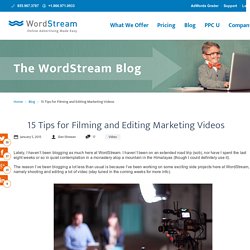 I haven’t been on an extended road trip (sob), nor have I spent the last eight weeks or so in quiet contemplation in a monastery atop a mountain in the Himalayas (though I could definitely use it). The reason I’ve been blogging a lot less than usual is because I’ve been working on some exciting side projects here at WordStream, namely shooting and editing a lot of video (stay tuned in the coming weeks for more info). Many marketers want to get into video, but to say it can be intimidating would be an understatement. With so much to think about – from camera equipment and editing software to lighting a shot and optimizing audio – the barriers to entry can be high. Fortunately, the price of decent gear and post-production software has dropped significantly during the past 10 years, making now the ideal time to start producing your own marketing videos.

Marketing Videos: Pre-Production 1. 2. 3. Make Internet TV : Shoot Videos : Lighting. A Few Basics of Lighting Generally, you will want to keep the strongest lights behind your camera. 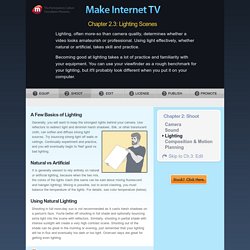 Use reflectors to redirect light and diminish harsh shadows. Silk, or other translucent cloth, can soften and diffuse strong light sources. Try bouncing strong light off walls or ceilings. Continually experiment and practice, and you will eventually begin to 'feel' good vs bad lighting. Natural vs Artificial.

Video Lighting Basics - Three Point Lighting. Best free video editing software 2015 UK - Test Centre. Of all the video editors on test, this one is the hardest to use and it is initially quite confusing. 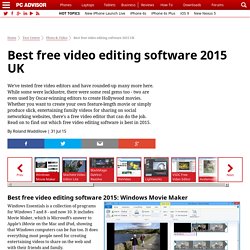 It has a lot of features whose function is not obvious, but it is worth persevering because it is capable of some clever effects. In fact, the number of functions is a bit overwhelming at first. 12 Tips for Improving Camera Phone Photos. We are living in a time where ‘convergence’ is everywhere. 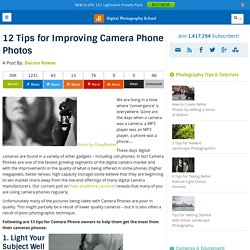 Gone are the days when a camera was a camera, a MP3 player was an MP3 player, a phone was a phone…. These days digital cameras are found in a variety of other gadgets – including cell phones. In fact Camera Phones are one of the fastest growing segments of the digital camera market and with the improvements in the quality of what is being offered in some phones (higher megapixels, better lenses, high capacity storage) some believe that they are beginning to win market share away from the low end offerings of many digital camera manufacturers. Our current poll on ‘take anywhere cameras‘ reveals that many of you are using camera phones regularly. Unfortunately many of the pictures being taken with Camera Phones are poor in quality.

Following are 13 tips for Camera Phone owners to help them get the most from their cameras phones: 1. The better lit your subject is the clearer your image is likely to be. 2. 3. 4. 5. 6. 7. How to Shoot, Edit & Publish Videos From Your Android Phone. Without meaning to stray to far into truism territory, the core raison d’être of smartphones is that they are designed for many tasks. 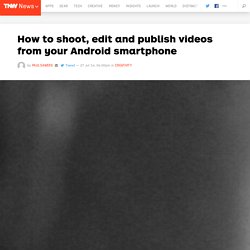 In a single, compact device you have a mobile phone, digital camera, PC, MP3 player, video player, travel guide, supermarket and any other service you can think of that works online. How to Start Video Blogging for Your Business. Getting videos into the mix can add extra oomph to a business owner's blog. 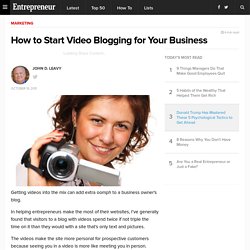 In helping entrepreneurs make the most of their websites, I've generally found that visitors to a blog with videos spend twice if not triple the time on it than they would with a site that's only text and pictures. Tips For Developing a Successful Video Blog. Engagement is extremely important when you're talking about inbound marketing. 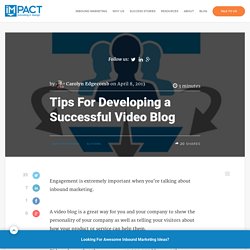 A video blog is a great way for you and your company to show the personality of your company as well as telling your visitors about how your product or service can help them. Did you know that there are over 42,000,000 blogs out there on the Internet? 10 Tips For Shooting Better Video with Your iPhone. Posted 04/21/2011 at 12:00pm | by J.R. 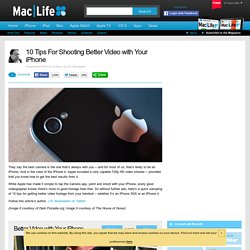 Bookwalter They say the best camera is the one that’s always with you -- and for most of us, that’s likely to be an iPhone. And in the case of the iPhone 4, Apple included a very capable 720p HD video shooter -- provided that you know how to get the best results from it. While Apple has made it simple to tap the Camera app, point and shoot with your iPhone, every good videographer knows there’s more to good footage than that.

So without further ado, here’s a quick sampling of 10 tips for getting better video footage from your handset -- whether it’s an iPhone 3GS or an iPhone 4. Follow this article’s author, J.R. (Image 8 courtesy of Dark.Pozadia.org; Image 9 courtesy of The House of Husar) Welcome to Forbes. Corporate Video Production - What works today and why. 5 Undeniable Reasons Why Your Marketing Strategy Needs To Include Corporate Video — Creative Rebellion. Over the last few years the use of online videos as a means of corporate advertising has become exceedingly common - and for good reason! 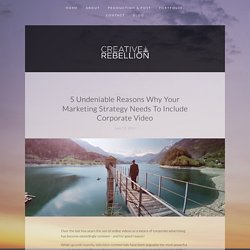 While up until recently, television commercials have been arguably the most powerful way to reach and influence the masses, in recent years this power has largely shifted away from traditional television commercials, and veered towards web-centric video advertising. Many companies are now switching their primary marketing focus to online video based strategies in order to reach as many of their customers as possible, and as such are seeing a much higher return on investment when compared to traditional television based advertising. Let's take a closer look at 5 reasons why video based web marketing is an optimal strategy for businesses, both large and small. 1.

They Are Easy to Share 2. One of the biggest benefits of hosting your corporate videos online is the tremendous potential for ranking high in search engines - specifically Google. 3. 4. 5. Derek Lieu – Editor » 26 Simple Tricks For Faster Editing (Premiere Pro CC) This is a list of the keyboard shortcuts, features and techniques that I use most frequently in my day to day editing that help me edit faster. 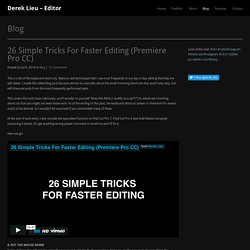 I made this video/blog post because almost no one talks about the small trimming shortcuts that aren’t very sexy, but will shave seconds from the most frequently performed tasks. This covers the most basic (seriously, you’ll wonder to yourself “Does this REALLY qualify as a tip???”) To advanced trimming shortcuts that you might not even know exist. As of the writing of this post, the keyboard shortcut system in Premiere Pro leaves much to be desired, so I wouldn’t be surprised if you overlooked many of these.

At the end of each entry I also include the equivalent function in Final Cut Pro 7, Final Cut Pro X and Avid Media Composer (assuming it exists). Tutorial: 10 Adobe Premiere Tips and Tricks. 5 Editing Tips for Better Business Video - Rewatchable Video Prod. 5 Really Great Ways To Ruin A Corporate Video. Videos have become a staple in business, whether it’s a new product announcement from the marketing department, a how-to guide from operations or a news release from the PR team. Whatever the purpose, all these videos must have one thing in common: They need to be good.

A great content idea can fall apart if the video looks like an amateur project. Most executives know this, which is why the biggest corporations hire professional filmmakers and videographers to do the job. Until you have that type of budget, though, you’ll have do it yourself. Before hitting Play, make sure you’re not recording these video no-no’s because any one of them could ruin any marketing strategy you have. 1.

If a video is too dark or too light, you can’t see what’s going on. 2. No one talked in silent films, but the film always had a soundtrack, and audiences had no trouble hearing it. 3. Filmmakers have been using visual effects for decades to make something out of nothing. 10 Tips to Create Your "Remarkable" Corporate Video - B2B Copywriting & Business Communication Tips - B2B Copywriter. (photo) I'm going to go out on a limb. Five tips on developing your corporate video. 7 Corporate Video Tips. Corporate videos have many uses but there is data driven corporate video tips that give us an indication of what make a corporate video a good video.

Following we will discuss some of the top tips to make your corporate video a greater success. Corporate Video Tip 1: Keep your video short Data indicates that viewers start getting antsy in as little as 10 seconds and that videos over 60 seconds lose a great deal of viewers. It is super important to keep videos very short, between 30-60 seconds and except for certain kinds of videos that people would expect to be longer, most corporate videos should not go over 60 seconds.