The Oral Microbiome and Cancer

Non-smokers and lung cancer: Clues may be in mouth. Researchers made a discovery in their quest to understand why so many people who have never touched a cigarette still develop lung cancer. 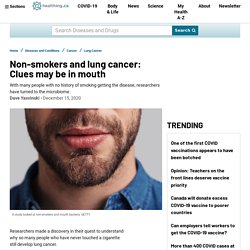 The research, published in the journal Thorax this week, found a link between the type and abundance of bacteria swimming around in the mouths of non-smokers and their chances of developing the deadly disease. With roughly 25 per cent of lung cancer diagnoses occurring in people with no history of smoking or other risk factors — such as family history or exposure to second-hand smoke — researchers have increasingly turned to the body’s microbiome for answers. They may have found some. To test their suspicions, the team behind the study relied on two separate pools of participants — the Shanghai Women’s Health Study and the Shanghai Men’s Health Study — a combined group of more than 135,000 people who had their health monitored periodically between 1996 and 2006.

Dave Yasvinski is a writer with Healthing.ca. Dental Plaque May Indicate Cancer Risk. An indicator of poor oral hygiene and a potential source of dental infections, the amount of dental plaque may predict death from cancer. 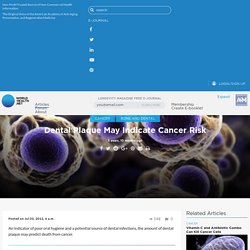 Poor oral hygiene may be associated with increased risk of cancer and premature death, reports a Swedish study. In 1985, Birgitta Soder, from the Karolinska Institutet (Sweden), and colleagues initiated a longitudinal study of 1,390 randomly selected, healthy Swedish adults, ages 30 to 40 years, who had no signs of periodontitis at baseline. The participants were followed with periodic checkups including smoking habits and oral health through 2009. Dental plaque measures were taken at the study start and in 1996, 1998, 2000, 2001, and 2009. Over the 24-year study period, 58 patients died, including 35 deaths due to malignancies. The “C” Word – More of the Story (Part III – The Importance of Good Dentistry) Affiliate links may have been used in this post. 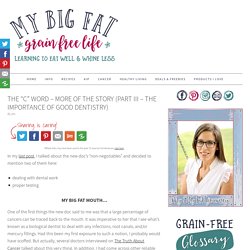 To read our full disclosure, click here. In my last post, I talked about the new doc’s “non-negotiables” and decided to mention two of them here: dealing with dental workproper testing My Big Fat Mouth… One of the first things the new doc said to me was that a large percentage of cancers can be traced back to the mouth. When I think about it now, however, it makes perfect sense. I ended up seeing a wonderful biological dentist in Ft. Again, I will spare you all of the gory details, but suffice it to say, I had a huge infection in my gums surrounding the root canal.

Dr. Since my early diagnosis, I have been going to an extremely skilled lymphatic therapist named Terri Bishop-Brahen (MA22716) with Therapeutic Touch of Ponte Vedra, Inc. I believe that my immune system will finally be able to do its job now that I’m not fighting a constant infection in my gums. Root Canal Dangers (Hal Huggins, D.D.S., M.S. – Weston A. Proper Testing… Studies Link Oral Microbiome to Cancers. Action Points Note that two case-control studies suggest that oral pathogens may be associated with specific gastrointestinal cancers.It remains unclear whether these findings are independent of periodontal disease in general. 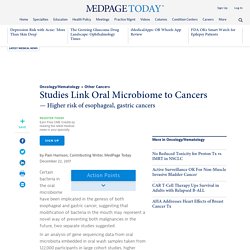 Bacterial alterations in salivary microbiota and their association in oral cancer. Characteristics of the study population A total of 376 individuals were enrolled in the study. 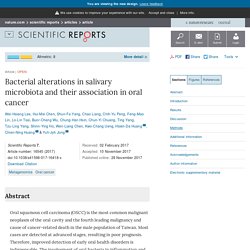 Based on diagnostic results, they were classified into three groups: Normal (127), Epithelial precursor lesions (including dysplasia, hyperplasia, and hyperkeratosis38,39; (124), and Cancer (125). Variations in oral microbiota associated with oral cancer. - PubMed - NCBI. A dysbiotic mycobiome dominated by Candida albicans is identified within oral squamous-cell carcinomas: Journal of Oral Microbiology: Vol 9, No 1. Introduction Oral squamous-cell carcinoma (OSSC) accounts for >90% of cases of oral cancer. 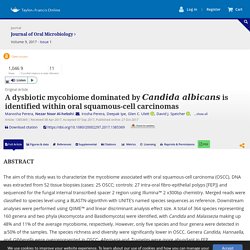 Mouth Microbes and Pancreatic Cancer. The mix of bacteria living in the oral cavity is related to a person’s risk of developing pancreatic cancer, according to a study. 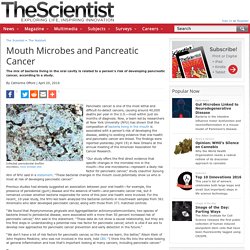 Infected periodontal biofilmWIKIMEDIA, MARK BONNER DMDPancreatic cancer is one of the most lethal and difficult-to-detect cancers, causing around 40,000 deaths per year in the U.S. —most within just six months of diagnosis. Now, a team led by researchers at New York University (NYU) has shown that the composition of bacteria living in the mouth is associated with a person’s risk of developing the disease, adding to existing evidence that oral health and pancreatic cancer are linked. The findings were reported yesterday (April 19) in New Orleans at the annual meeting of the American Association for Cancer Research.

Oral Health and the Oral Microbiome in Pancreatic Cancer: An... : The Cancer Journal. In the United States, the Surveillance Epidemiology and End Results registry data show that pancreatic cancer incidence has been slowly increasing with the aging of the population.1 Cancers of the exocrine pancreas comprise approximately 95% of these neoplasms, and although rare by the National Cancer Institute definition (<15 cases/100,000), pancreatic cancer is ranked as the third leading cause of cancer-related mortality in the United States.2 By 2030, it is expected that the current annual number of pancreas cancer–related deaths will more than double to become the second leading cause of cancer mortality in US adults.3 The annual numbers of incident cases and deaths are quite similar despite a slow improvement in the 5-year relative survival rate that now is approximately 8%. 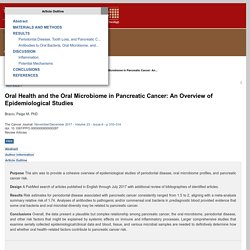