Stress, PTSD, and the Gut Microbiome

Stress Induces Endotoxemia and Low-Grade Inflammation by Increasing Barrier Permeability. Introduction Inflammation is the response of the innate immune system triggered by stimuli like microbial pathogens and injury. 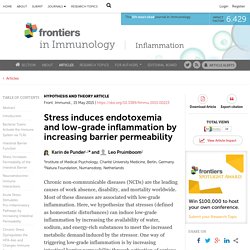 Acute systemic inflammation such as in sepsis, trauma, burns, and surgery is characterized by a quick increase in plasma levels (up to 100-fold) of pro-inflammatory cytokines and acute phase proteins, while in low-grade inflammation, there is a sustained but only two to threefold increase in circulation pro-inflammatory mediators (1). Chronic low-grade inflammation is characteristic for many non-communicable diseases (NCDs) including diabetes type II, cardiovascular disorders, autoimmune diseases, chronic fatigue syndrome, depression, and neurodegenerative pathologies, but until now the exact mechanism behind the elevated levels of inflammatory mediators found in these conditions is not well understood (2–5).

Stress may harm gut health as much as junk food. Prebiotics could stop stress from harming sleep quality. How Chronic Stress Leads to Hormone Imbalance - The Paleo Mom. When we think about the effects of chronic stress, we think of cortisol. 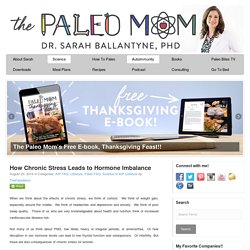 We think of weight gain, especially around the middle. We think of headaches and depression and anxiety. We think of poor sleep quality. Those of us who are very knowledgeable about health and nutrition think of increased cardiovascular disease risk. Not many of us think about PMS, low libido, heavy or irregular periods, or amenorrhea. A probiotic restores mucosal barrier function. 58 Ways to Inhibit Your Stress Response and Decrease Cortisol - Selfhacked. Stress affects the balance of bacteria in the gut and immune response. Stress can change the balance of bacteria that naturally live in the gut, according to research published this month in the journal Brain, Behavior, and Immunity. 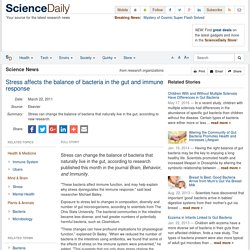 "These bacteria affect immune function, and may help explain why stress dysregulates the immune response," said lead researcher Michael Bailey. Exposure to stress led to changes in composition, diversity and number of gut microorganisms, according to scientists from The Ohio State University. The bacterial communities in the intestine became less diverse, and had greater numbers of potentially harmful bacteria, such as Clostridium. "These changes can have profound implications for physiological function," explained Dr Bailey. Regulation of stress response by microbiota. Evolutionary Psychiatry: Stress Kills via Inflammation (Possibly) 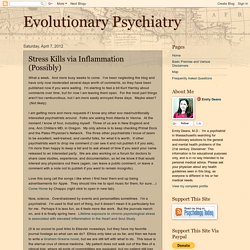 And more busy weeks to come. I've been neglecting the blog and have only now moderated several days worth of comments, so they have been published now if you were waiting. I'm starting to feel a bit Kurt Harrisy about comments over time, but for now I am leaving them open. For the most part things aren't too rambunctious, but I am more easily annoyed these days.

Maybe wiser? I am getting more and more requests if I know any other evo med/nutritionally interested psychiatrists around. Love this song (all the songs I like when I first hear them end up being advertisements for Apple. Now, science. (It is so uncool to post links to Elsevier nowadays, but they have my favorite journal hostage so what can we do? I like the Heart and Soul Study. Where the rubber meets the road is that higher lifetime trauma was associated with higher levels of inflammatory cytokines at baseline and 5 years later. Maybe I should leave off and move to Hawaii after all... The Inflammatory Cortisol Ballet Part 1. The Inflammatory Cortisol Ballet Part 2. The Inflammatory Cortisol Ballet Part 3. Gut Microbiota and the Neuroendocrine System. While an imbalance of the gut microbial community (induced by stress or diet) can lead to inflammatory processes and activation of the HPA axis, experimental work points to potential beneficial roles of probiotics, including lactobacilli and bifidobacteria in this process (Table 1). 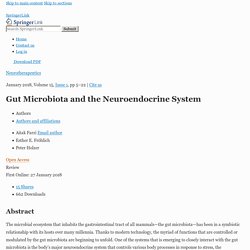 Table 1 Selection of probiotics with reported preclinical effects on the neuroendocrine system A recent study showed that the probiotic Bifidobacterium pseudocatenulatum CECT 7765, administered from postnatal day 2 (P2) until P21, modified maternal separation (MS) stress-induced neuroendocrine alterations [72]. When tested at P21, B. pseudocatenulatum did not attenuate MS stress-induced increases in corticosterone levels, whereas stress-induced increases in catecholamines in the hypothalamus and small intestine were attenuated by the probiotic. Chronic Stress Discombobulates Gut Microbiome Communities. Gut bacteria found to have a role in both PTSD and Alzheimer's disease. One of the biggest new areas of medical research in the 21st century is the investigation into the holistic effect of the gut microbiome on the human body. 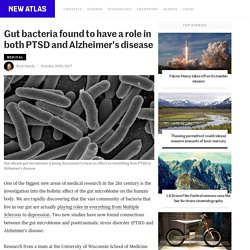 We are rapidly discovering that the vast community of bacteria that live in our gut are actually playing roles in everything from Multiple Sclerosis to depression. Two new studies have now found connections between the gut microbiome and posttraumatic stress disorder (PTSD) and Alzheimer's disease. Research from a team at the University of Wisconsin School of Medicine and Public Health has compared the gut microbiome of 25 human subjects with Alzheimer's disease to 25 cognitively healthy human subjects. "By using DNA sequencing to take a 'snapshot' of gut bacterial composition, we found that individuals with dementia had decreased microbial richness and diversity in their gut microbiome compared to people without a diagnosis of dementia," says Nicholas Vogt, first author on the study. PTSD linked to changes in gut bacteria. The bacteria in your gut could determine whether you develop PTSD.