Nose-to-Tail Eating: Everything You Need to Know. This article originally appeared in Paleo Magazine. 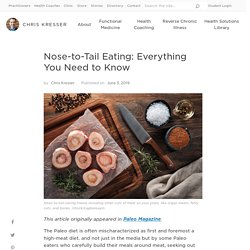 The Paleo diet is often mischaracterized as first and foremost a high-meat diet, and not just in the media but by some Paleo eaters who carefully build their meals around meat, seeking out only the leanest cuts. Meat is an important part of Paleo-style eating, yet the most common mistake made by those who go Paleo is eating too much meat—muscle meat, that is. By always choosing muscle meat, like a steak or a chicken breast, Paleo followers tend to ignore the other bits of the animal: SkinCartilageBoneBone marrowOrgan meatsTendonsFattier meat cutsAnimal fats, like lard and tallow If you’re not eating nose to tail, you could be missing out on important nutrients. 10 Paleo Instagram Foodies You Need to Follow. The Paleo Diet Beginner's Guide, Meal Plan and Food List. In the past few decades, our diets have changed dramatically. 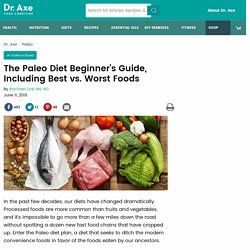 Processed foods are more common than fruits and vegetables, and it’s impossible to go more than a few miles down the road without spotting a dozen new fast food chains that have cropped up. Enter the Paleo diet plan, a diet that seeks to ditch the modern convenience foods in favor of the foods eaten by our ancestors.

The Paleo diet has been associated with many health benefits from better blood sugar levels to reduced inflammation. Considered one of the best diet plans for weight loss because it’s high in protein and fat and emphasizes nutrient-rich foods, it may also increase satiety and help correct nutrient deficiencies. Still, the diet has remained the subject of much controversy in recent years. What's the Pegan Diet? (And How Does It Compare To Primal?) You CAN Fix Yourself with a Whole30/Paleo Type Diet - Sustainable Dish.

At the end of my Senior year in high school, conveniently around prom and graduation, I developed severe acne on my forehead and cheeks. 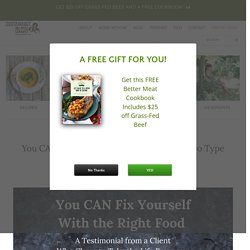 It was unlike anything I had experienced before and did not know what measures to take. I visited a dermatologist but did not see the results that I was looking for. The topical lotions made my skin extremely dry and the acne was getting worse, not better. In addition to my acne, I was struggling to gain weight and improve my energy levels. Being underweight most of my life, I had meet with a nutritionist several times who advised me to eat simple carbohydrates for energy and weight gain. I visited Diana Rodgers for the first time in late summer, before leaving for college. Within a month of beginning this new program, I had gained 12 pounds and my skin had begun to quickly return to a healthy state. Meal Prep: Your Best Tool for Healthy Eating. Paleo Blogs. What is the Paleo Diet? - The Paleo Mom.

The Paleo Diet - A Beginner's Guide + Meal Plan. The paleo diet is designed to resemble what human hunter-gatherer ancestors ate thousands of years ago. 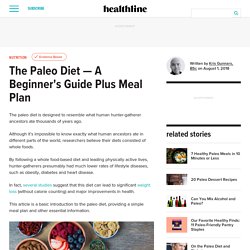 Although it’s impossible to know exactly what human ancestors ate in different parts of the world, researchers believe their diets consisted of whole foods. By following a whole food-based diet and leading physically active lives, hunter-gatherers presumably had much lower rates of lifestyle diseases, such as obesity, diabetes and heart disease.

In fact, several studies suggest that this diet can lead to significant weight loss (without calorie counting) and major improvements in health. This article is a basic introduction to the paleo diet, providing a simple meal plan and other essential information. Share on Pinterest There is no one "right" way to eat for everyone and paleolithic humans thrived on a variety of diets, depending on what was available at the time and where in the world they lived. Consider this as a general guideline, not something written in stone. Here are the basics: ThePaleoSolution FoodMatrix. Paleo Challenges. The Best First Step to Paleo. I spend quite a bit of time writing about strategies for transitioning to a Paleo template, often in answer your questions! 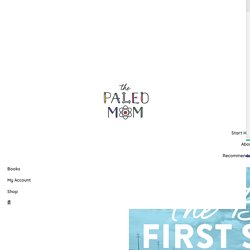 I also know first hand how daunting the idea of ditching the Standard American Diet for a Paleo one can be—I traveled the same path myself nearly 6 years ago. Depending on how our diets look before this transition, it can feel like a real uphill climb. But, I’m also very passionate about dispelling the myth that Paleo, or even the Autoimmune Protocol, is “hard.” Does it take a shift in mindset and a set of new habits to make sustainable? Absolutely. That’s good news, because I want to share as many of these strategies with you as possible! Start With Veggies As you might expect, I think the best first step toward Paleo is to focus on nutrient density. Paleo Diet Clinical Trials and Studies.

In the media, the Paleo diet is sometimes criticized for being based on “reenactment” (which is so not true!) 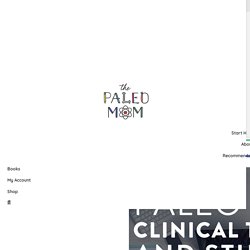 , for increasing disease risk due its saturated fat and cholesterol content, or harming health due to a deficiency in certain key nutrients (like calcium or carbohydrates). Fortunately, we have solid scientific evidence to battle all of these myths! The Case for More Carbs: Insulin’s Non-Metabolic Roles in the Human Body. Science Reveals Dangerous Pitfalls of the Paleo Diet. Are you following a Paleo diet? 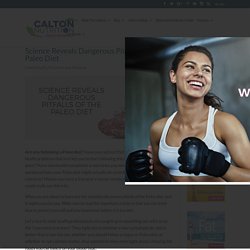 Have you noticed that it might not be fixing the health problems that first led you to start following this dietary doctrine in the first place? How to Avoid 3 Problems with Paleo. 5 Ways You're Doing Paleo Wrong. The Paleo Diet is a powerful tool for healing, weight loss and overall health. 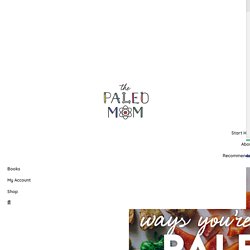 When it’s done right, it can lead to incredible health improvements and positive lifestyle shifts. But how do you know if you’re doing it right? If you’ve been following Paleo for a while and aren’t seeing results, you might be making one of these 5 key mistakes. 1. You’re staying as low-carb as you can. Can A Paleo Diet Cause Weight Gain? Ask the RD: Leg cramping on Paleo and Laryngopharyngeal Reflux (LPR)

More than 1/3 of Americans have trouble sleeping every night, and 51% of adults say they have problems sleeping at least a few nights each week. 43% of respondents report that daytime sleepiness interferes with their normal daytime activities. These problems are getting worse, not better. The number of adults aged 20 to 44 using sleeping pills doubled from 2000 to 2004, and the number of kids ages 1-19 who take prescription sleep remedies jumped 85% during the same period. Prescriptions for sleeping pills topped 56 million in 2008 – up 54% from 2004 – with over $5 billion in sales in 2010. This isn’t surprising in a culture that values productivity and activity above all else, and is almost scornful of rest and relaxation. You cannot be healthy without adequate sleep.

Unfortunately for us, the body hasn’t forgotten the importance of sleep. Among other things, a full night’s sleep: #10 Beyond Paleo: Practice Pleasure. #11 Beyond Paleo: Moving from a "paleo diet" to a "paleo template" #12 Beyond Paleo: Food fascism and the 80/20 rule. #13 Beyond Paleo: The biggest obstacle to perfect health is your mind. 10 Myths about the Paleo Diet. Does This Specific Genetic Test Help You Decide Whether to Eat Paleo or Vegetarian? Podcast with Dr. Alon Keinan. Please read the title of this blog again: this is how this research finding has been positioned in the press. 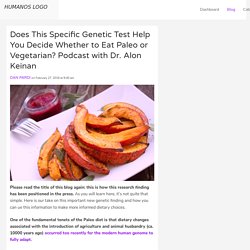 As you will learn here, it’s not quite that simple. Here is our take on this important new genetic finding and how you can ue this information to make more informed dietary choices. One of the fundamental tenets of the Paleo diet is that dietary changes associated with the introduction of agriculture and animal husbandry (ca. 10000 years ago) occurred too recently for the modern human genome to fully adapt. This is likely true but we also know, for instance, that the ability to digest lactose into adulthood (lactase persistence) is more prevalent in parts of the world where people domesticated animals and relied upon milk as a source of nutrition. Among other factors, this is probably because there was selection pressure for the mutation that enabled people to consume milk in those areas. A (somewhat oversimplified) primer on essential fatty acids Guest The findings from Dr. 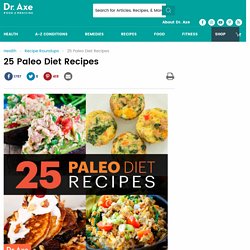 While I don’t eat a paleo diet, it does have its benefits. Because a Paleo diet is high in good-for-you foods like quality meats, eggs and vegetables while eliminating processed foods, legumes and grains, Paleo diet recipes can be terrific options for those with gluten sensitivities or allergies and people looking to jump-start their weight loss. You don’t need to go all Paleo all the time, either. Add some of these delicious Paleo diet recipes into your family’s menu to enjoy protein-rich, low-carb recipes no matter what meal. Breakfast 1. There’s nothing like a stack of pancakes to get your morning go. Photo: Almond Flour Pancakes / Dr. Download 25 paleo recipe ideas here. Almost there! Enter your email to download this free guide right now. We hate SPAM and promise to keep your email address safe. 2. Get a little taste of autumn in every bite with these apple cinnamon pancakes. 3. 4. 5.

Pizza for breakfast? A Week Of Easy Paleo Meal Ideas (i.e. what do I eat?) 3 Painless Ways to "Eat Your Liver" Liver is quite simply the most nutrient-dense food available to us. A mere 100 calories worth, about 2oz, contains: 356% of your RDA of Vitamin A, 112% of Vitamin B2, 50% of Vitamin B3, 40% of Vitamin B5, 36% of folate (Vitamin B9), 658% if Vitamin B12, 238mg of choline, 20% of your RDA of Iron, 28% of Phosphorus, 6% of Potassium, 20% of Zinc, 400% of Copper, 10% of Manganese, and 28% of Selenium. Not to mention smaller amounts of many other vitamins and minerals, important trace minerals like molybdenum, plus lots of glycine, methionine, cysteine, and glutamic acid… all of which support the various oxidation, reduction, hydrolysis, and conjugation pathways involved in detoxification by your liver (see The Best Foods and Nutrients to Support Liver Detox), and are important for metabolism, central nervous system health, and immune health (see Why Everyone Should Be Eating Organ Meat and The Paleo Approach).

A few ounces a week goes a long way toward supporting health! 5 Easy Swaps for Your Favorite Dairy Products. Dairy is a staple of the Standard American Diet, but it has traditionally been considered not to be a part of a standard Paleo diet. The science really isn’t cut and dry though, especially when it comes to high-quality grass-fed dairy, so I consider dairy a grey-area food—it’s health benefits are considerable, but many people (myself included!) Find it causes inflammation we’d rather do without (for all the pros and cons of dairy products, see “The Great Dairy Debate“). If you’ve discovered you can’t tolerate dairy, don’t despair!

Make these easy swaps and you won’t even miss the real stuff. Swap butter for ghee, lard or palm shortening Butter is ubiquitous, especially in baking. If you’re looking for the same rich flavor as butter, ghee is a fabulous alternative. For baking applications, lard and palm shortening are also excellent great butter alternatives.

Swap milk for nut or coconut milk. Paleo Flour Blend: A Paleo Substitute for All-Purpose Flour. There are definitely a lot of healthy aspects of a Paleo diet, and as I’ve said before, I don’t eat a Paleo diet … but close. To make many Paleo-friendly recipes, especially baked goods, this flour recipe is a must-know! A Paleo flour blend like this one brings together the best of the best when it comes to a grain-free flour mix. Every flour is different, and with this recipe, you’re getting the health benefits and beneficial cooking qualities of not one, not two, but four different kinds of totally gluten-free and grain-free flours.