Cooling Inflammation: Making Monsters, Renegade C. butyricum and E. coli. It is common knowledge that our gut is teeming with good bacteria that we feed with prebiotic fiber to keep us healthy. 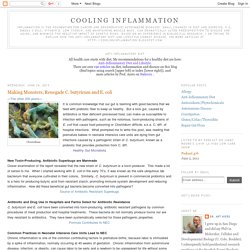 But a sick gut, caused by antibiotics or fiber deficient processed food, can make us susceptible to infection with pathogens, such as the notorious, toxin-producing strains of E. coli that cause food poisoning or Clostridium difficile, a.k.a. C. diff. of hospital infections. What prompted me to write this post, was reading that premature babies in neonatal intensive care units are dying from gut infections caused by a pathogenic strain of C. butyricum, known as a probiotic that provides protection from C. diff. New Toxin-Producing, Antibiotic Superbugs are Manmade Closer examination of the report revealed that the new strain of C. butyricum is a toxin producer. Antibiotic and Drug Use in Hospitals and Farms Select for Antibiotic Resistance Common Practices in Neonatal Intensive Care Units Lead to NEC Antibiotics Used to Make Fat Cattle Select for Toxin Production. Cooling Inflammation: Necrotising Enterocolitis, Low Birth Weight and Formula. Human Milk and Milk Supplements Protect Newborns Babies born prematurely are at risk of a serious bacterial infection of the intestines, necrotizing enterocolitis (NEC), that can be prevented if formula based on cow’s milk products is avoided and human milk is used for all feedings. 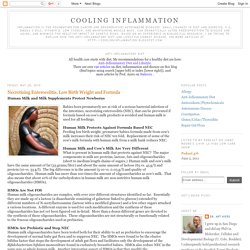 Human Milk Protects Against Formula Based NEC Feeding low birth weight, premature babies formula made from cow’s milk increases their risk of NEC ten fold. Replacement of some of the cow’s milk formula with human milk from a milk bank reduces NEC. Human Milk and Cow’s Milk Are Very Different What is present in human milk that protects against NEC? HMOs Are Not FOS Human milk oligosaccharides are complex, with over 200 different structures identified so far.

HMOs Are Prebiotic and Stop NEC Human milk oligosaccharides have been tested both for their ability to act as prebiotics to encourage the development of normal baby gut flora and to suppress NEC. Neonatal Nurseries Should Use Only Human Milk. Hospitals influence infants' intestinal microbiomes — The American Microbiome Institute. As we have previously discussed, necrotizing enterocolitis (NEC) is a bacterial infection that often occurs in low weight, premature infants, that can lead to death. 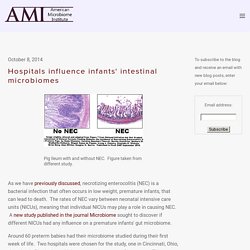 The rates of NEC vary between neonatal intensive care units (NICUs), meaning that individual NICUs may play a role in causing NEC. A new study published in the journal Microbiome sought to discover if different NICUs had any influence on a premature infants' gut microbiome. Around 60 preterm babies had their microbiome studied during their first week of life. Two hospitals were chosen for the study, one in Cincinnati, Ohio, the other in Birmingham, Alabama, over the course of two years. The researchers discovered that while many of the infants' microbiomes showed similar characteristics, such as an abundance of Proteobacteria, there were nevertheless statistically significant differences in the microbiomes between hospitals, and temporally within hospitals. Let's talk about necrotizing enterocolitis — The American Microbiome Institute.

A rather contentious issue at the recent Harvard Probiotics Symposium, which AMI was fortunate enough to attend, was the use of probiotics in treating necrotizing enterocolitis (NEC). 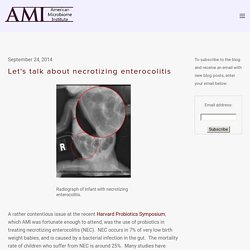 NEC occurs in 7% of very low birth weight babies, and is caused by a bacterial infection in the gut. The mortality rate of children who suffer from NEC is around 25%. More evidence that probiotics help to prevent necrotizing enterocolitis — The American Microbiome Institute. In an article published by Nature Pediatric Research, researchers investigated the effectiveness of the bacteria Bifidobacterious longum subsp. infantis as a probiotic used to decrease the risk of necrotizing enterocolitis (NEC). 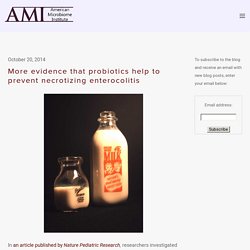 NEC, as we have discussed previously in this blog, is a type of bacterial infection in premature babies, which can often be fatal. To study the effectiveness of B. infantis, researchers assigned 50 rat pups into three groups, which were delivered one day premature of term, to be fed by their mothers, fed with formula, or fed with formula supplemented with B. infantis. The pups were also exposed to hypoxia and cold stress.

Intestinal tissue was tested for response. The results of this experiment reinforced the importance of maternal milk, and showed the importance of a probiotic, B. infantis, if formula must be used. Specific bacteria and overall diversity linked to severity of necrotizing enterocolitis — The American Microbiome Institute. Necrotizing enterocolitis (NEC) is an inflammation of the gut that occurs due to bacterial infection in premature infants. 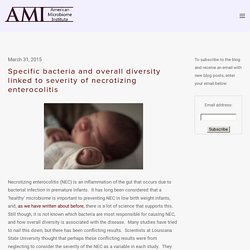 It has long been considered that a ‘healthy’ microbiome is important to preventing NEC in low birth weight infants, and, as we have written about before, there is a lot of science that supports this. Still though, it is not known which bacteria are most responsible for causing NEC, and how overall diversity is associated with the disease. Many studies have tried to nail this down, but there has been conflicting results. Scientists at Louisiana State University thought that perhaps these conflicting results were from neglecting to consider the severity of the NEC as a variable in each study.

They hypothesized that the infants’ microbiomes would vary depending on the severity of the NEC, and that the most severe cases would show a characteristic microbiome that may be important to understanding the disease.