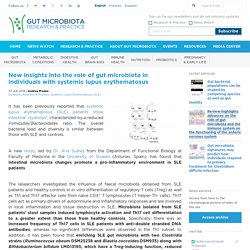 The overall bacterial load and diversity is similar between those with SLE and controls. A new study, led by Dr. Ana Suárez from the Department of Functional Biology at Faculty of Medicine in the University of Oviedo (Asturias, Spain), has found that intestinal microbiota changes promote a pro-inflammatory environment in SLE patients. The researchers investigated the influence of faecal microbiota obtained from SLE patients and healthy controls in in vitro differentiation of regulatory T cells (Treg) as well as Th1 and Th17 effector cells from naïve CD4+ T lymphocytes (T helper-Th- cells). Th17 cells act as primary drivers of autoimmune and inflammatory responses and are involved in local inflammation and tissue destruction in SLE.

Reference: López P, de Paz B, Rodríguez-Carrio J, et al. Microbiome Seems to Have a Role in Triggering Lupus. Systemic lupus erythematosus (SLE) is caused by a combination of genetic and environmental factors. 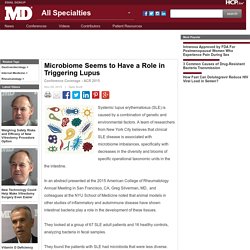 A team of researchers from New York City believes that clinical SLE disease is associated with microbiome imbalances, specifically with decreases in the diversity and blooms of specific operational taxonomic units in the the intestine. In an abstract presented at the 2015 American College of Rheumatology Annual Meeting in San Francisco, CA, Greg Silverman, MD, and colleagues at the NYU School of Medicine noted that animal models in other studies of inflammatory and autoimmune disease have shown intestinal bacteria play a role in the development of these tissues. They looked at a group of 67 SLE adult patients and 16 healthy controls, analyzing bacteria in fecal samples. They found the patients with SLE had microbiota that were less diverse.

Hints of Hormone-Microbiome Connection in Lupus' Gender Gap. Nine out of ten people with lupus are women, a major gender gap long postulated to be linked with immunoregulation by estrogen and androgens. 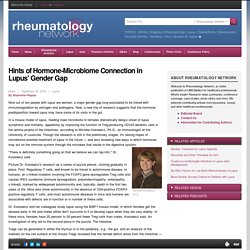 Now, a new line of research suggests that the hormonal predisposition toward lupus may have some of its roots in the gut. In a mouse model of lupus, feeding male microbiota to females dramatically delays onset of lupus symptoms and mortality, apparently by improving the function of Treg-producing CD103 dendritic cells in the lamina propria of the intestines, according to Michele Kosiewicz, Ph.D., an immunologist at the University of Louisville. Though the research is still in the preliminary stages, it's raising hopes of microbiome-oriented treatment of lupus in the future — and also revealing new ways in which hormones may act on the immune system through the microbes that reside in the digestive system. Michele Kosiewicz, Ph.D. "There is definitely something going on that we believe we can tap into," Dr. Picture Dr. Dr. Dr. Lupus, Sjögren’s syndrome, and the microbiome — The American Microbiome Institute.

Sjögren’s syndrome is an autoimmune disorder characterized by the destruction of exocrine glands, like those that produce tears and saliva. 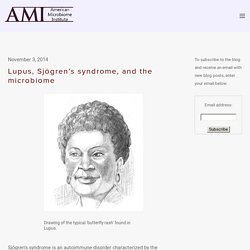 Lupus is an autoimmune disease characterized by inflammation of various body tissues. People suffering from both these disorders produce antibodies and mount an immune response against a peptide, Ro60, that occurs naturally in the body. While this autoimmune response may not be the cause of these diseases, it likely contributes to their severity. An article published by Clinical Immunology shows that specific proteins derived from bacteria in the microbiome can activate the production of these self-destructive antibodies, suggesting that the microbiome could play a role in initiating autoimmunity. Researchers at the University of Virginia used T cell hybridoma activation and epitope mapping to discover which peptides activate the specific Ro60 immune response.

A possible new treatment for Lupus by modulating the microbiome — The American Microbiome Institute. Editors Note: It would be of immense help to the AMI if we could learn more about our readership. 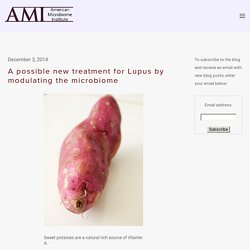 Please, if you are reading this, take less than 1 minute to fill out the short form and subscribe to our website. This is a different form than the blog subscription. We would be very grateful if everyone reading this filled out the form. Link to form. Lupus is a well-known autoimmune disease that causes inflammation in several organs and can sometimes be fatal. The researchers tested two groups of mice, one a healthy control group and the other that had a genetic mutation that causes Lupus-like symptoms. 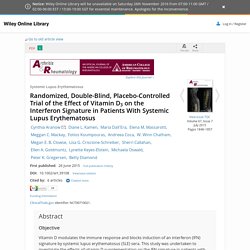 This study was undertaken to investigate the effects of vitamin D supplementation on the IFN signature in patients with SLE. Methods SLE patients (n = 57) with stable, inactive disease, a serum 25-hydroxyvitamin D (25[OH]D) level ≤20 ng/ml, an elevated anti–double-stranded DNA antibody level, and an IFN signature (as determined by measuring the expression levels of 3 IFN response genes) were randomized into a 12-week double-blind, placebo-controlled trial of vitamin D3 at doses of 2,000 IU or 4,000 IU.