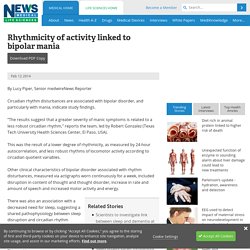 “The results suggest that a greater severity of manic symptoms is related to a less robust circadian rhythm,” reports the team, led by Robert Gonzalez (Texas Tech University Health Sciences Center, El Paso, USA). This was the result of a lower degree of rhythmicity, as measured by 24-hour autocorrelation, and less robust rhythms of locomotor activity according to circadian quotient variables. Other clinical characteristics of bipolar disorder associated with rhythm disturbances, measured via actigraphs worn continuously for a week, included disruption in content of thought and thought disorder, increase in rate and amount of speech and increased motor activity and energy.

Rhythm disturbances were not associated with depression, however. Licensed from medwireNews with permission from Springer Healthcare Ltd. Scientists Probe Connection Between Bipolar Disorder and Circadian Rhythm – Chronobiology.com. Bipolar disorder is a debilitating chronic mental illness that is characterized by extreme shifts in behavior and mood. 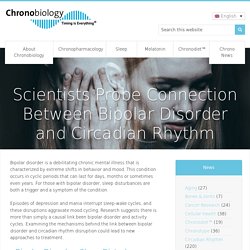 This condition occurs in cyclic periods that can last for days, months or sometimes even years. For those with bipolar disorder, sleep disturbances are both a trigger and a symptom of the condition. Episodes of depression and mania interrupt sleep-wake cycles, and these disruptions aggravate mood cycling. Research suggests there is more than simply a causal link been bipolar disorder and activity cycles. Examining the mechanisms behind the link between bipolar disorder and circadian rhythm disruption could lead to new approaches to treatment. Light, Darkness and Mood - PsychEducation. (updated 3/2019) 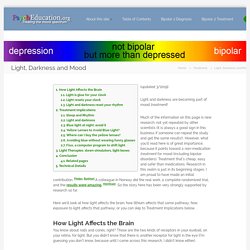 Blue Light is the Light That Matters. Your eyes are for seeing the world, right? 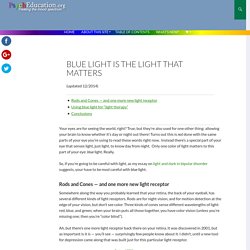 True; but they’re also used for one other thing: allowing your brain to know whether it’s day or night out there! Turns out this is not done with the same parts of your eye you’re using to read these words right now. Instead there’s a special part of your eye that senses light, just light, to know day from night. Only one color of light matters to this part of your eye: blue light. Really. Bipolar Disorder, Light, and Darkness. Using light and darkness as treatment (less med’s!) 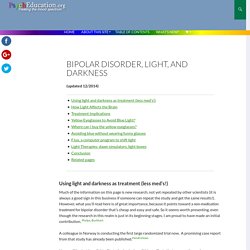 Much of the information on this page is new research, not yet repeated by other scientists (it is always a good sign in this business if someone can repeat the study and get the same results!). However, what you’ll read here is of great importance, because it points toward a non-medication treatment for bipolar disorder that’s cheap and easy and safe. So it seems worth presenting, even though the research in this realm is just in its beginning stages. I am proud to have made an initial contribution. Phelps, Burkhart A colleague in Norway is conducting the first large randomized trial now. Here we’ll look at how light affects the brain; how lithium affects that same pathway; how exposure to light affects that pathway; and how we can use this knowledge as part of standard bipolar treatment. 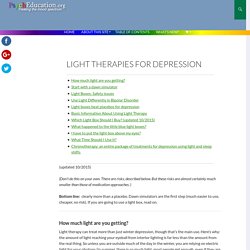 There are risks, described below. But these risks are almost certainly much smaller than those of medication approaches. ) Bottom line: clearly more than a placebo. Dawn simulators are the first step (much easier to use, cheaper, no risk). How much light are you getting? Light therapy can treat more than just winter depression, though that’s the main use. Brightness Values: Outdoors on a sunny day is 50-100 times brighter than office or room lighting. Bipolar Glasses: how do blue blocking glasses prevent bipolar insomnia? - SomniLight Light Therapy. PsychEducation. This will take a little explaining. 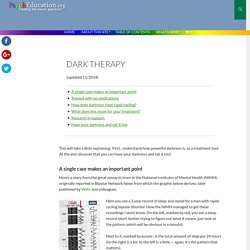 First, understand how powerful darkness is, as a treatment tool. At the end, discover that you can have your darkness and eat it too! A single case makes an important point Here’s a story from the great research team at the National Institutes of Mental Health (NIMH), originally reported in Bipolar Network News from which the graphic below derives; later published by Wehr and colleagues. 24-hour cycling: a perfect rapid clock. (reviewed 12/2014) Here are some really remarkable graphs and pictures. 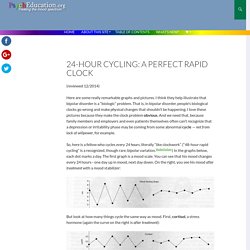 I think they help illustrate that bipolar disorder is a “biologic” problem. That is, in bipolar disorder, people’s biological clocks go wrong and make physical changes that shouldn’t be happening. I love these pictures because they make the clock problem obvious. And we need that, because family members and employers and even patients themselves often can’t recognize that a depression or irritability phase may be coming from some abnormal cycle — not from lack of willpower, for example. So, here is a fellow who cycles every 24 hours, literally “like clockwork”. (“48-hour rapid cycling” is a recognized, though rare, bipolar variation.Voderholzer) In the graphs below, each dot marks a day.

But look at how many things cycle the same way as mood. And growth hormone, which has many roles in the brain: and two members of the epinephrine family, other basic stress hormones: Even his handwriting changed every 24 hours: