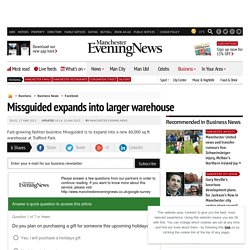 Missguided, which specialises in fashion for younger women, is to occupy a unit in the Centenary Park development owned by the Duchy of Lancaster, the Queen's property business. Social media sites such as Twitter and Facebook have helped Missguided grow fast. According to the company, sales grew by 380 per cent in 2011, thanks to social marketing. MEET THE GRAPHIC DESIGNER: HOLLIE COOKSON - Missguided. Hollie is a Digital Graphic Designer on the creative team at MGHQ which means everything you see creatively, Hollie has had a hand in creating. 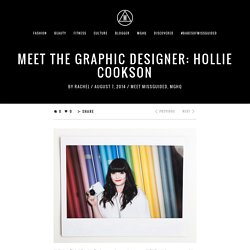 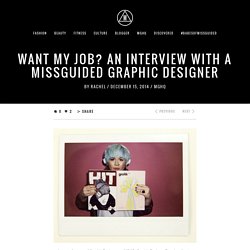 Being a graphic designer at Missguided doesn’t just mean I design graphics alone. From the initial concept right through to the delivery of the idea, my role involves conceptualizing ideas to solve problems. For example it can be anything from visually communicating a delivery message to large-scale projects that encapsulate the brands visual representation, such as branding and editorial content.

Its fast paced, creatively challenging and basically anything goes; we’re a forward thinking team. An Interview with a Missguided Design Assistant - Missguided. Design Assistant Annabelle works within the Design team at Missguided, helping to create the new product that hits the site each week. 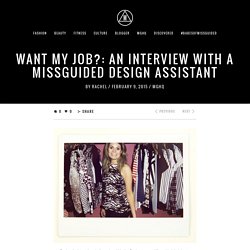 Wanna know more? We asked Annabelle all about her job… Hey Annabelle, so can you tell us about your role as Missguided Design Assistant? As a Design Assistant, I help the Designers get their designs sent out by CADing them and sending packs out to be sampled. There is a lot of researching involved as an Assistant on blogs/magazines/Instagram/Pinterest, looking for new inspiration for our current trends, next season’s upcoming trends and also research for my own personal designs. Every week when I get the time, I also do my own designs under our chosen trends for that season. Will Missguided's new Manchester headquarters be 'the coolest office in the w... Nitin Passi plans to travel to the launch party of Missguided’s new headquarters in his own helicopter, landing on the rooftop. If all ambitious design plans go ahead, he and his 210 staff will be moving into one of the most innovative and mind-blowing offices on the planet.

Olest office in the world? Missguided's new HQ has floating meeting rooms, DJ... Nitin Passi plans to travel to the launch party of Missguided’s new headquarters in his own helicopter, landing on the rooftop. 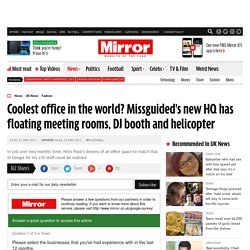 If all ambitious design plans go ahead, he and his 210 staff will be moving into one of the most innovative and mind-blowing offices on the planet. In just over two months’ time, Mr Passi’s Missguided will find out if it is punching alongside the likes of Google and other big boys when it comes to fun and lively work spaces, reports the Manchester Evening News. Missguided founder Nitin Passi is taking on big retail names. By Neil Craven, Financial Mail on Sunday Published: 20:59 GMT, 4 April 2015 | Updated: 10:40 GMT, 5 April 2015 At the age of 32 Nitin Passi has all the trappings of success. 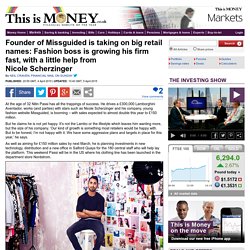 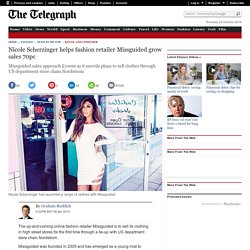 Missguided was founded in 2009 and has emerged as a young rival to online retailers Asos and Boohoo. It was founded by entrepreneur Nitin Passi, who created the online retailer from his bedroom. In the year to the end of March, sales grew 70pc to £86m, with pre-tax profits rising from £900,000 to £5.5m. That is below Mr Passi’s ambitious target of hitting £100m of revenues by 2015, but the youth fashion brand is still growing rapidly, thanks in part to a tie-up with pop star Nicole Scherzinger, who designed a range of clothing with Missguided.

Faster fashion: ‘If a trend comes, we need to have it on our site in under a ... There is a fashion that fashion likes to ignore. 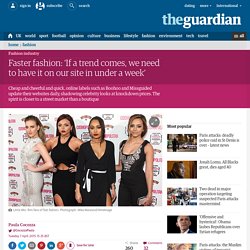 Here is one of its imaginary clothes rails: a pair of crocheted white shorts, a fringed suedette jacket. Flick, flick. A maxi skirt slashed to the thigh, tops with backs or fronts cut out. Each item costs £20 or less and its main ingredient lies somewhere between 95% viscose and 100% polyester. Fashion’s wardens do not like to acknowledge these clothes, which live mostly in exile from Vogue and the highbrow style magazines. The figures are impressive. Culture Archives - Missguided. Mary-Kate and Ashley, Kylie and Kendall, Cara and Poppy Delevingne – as we’ve been reminded by the Balmain AW15 campaign, there’s been an uprising of sisters that we can’t stop talking about. 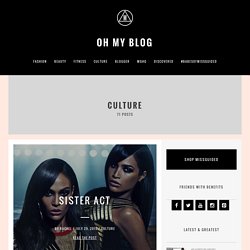 Who needs a new handbag when your sister is your best accessory?! Whether you’re trying to work a feminine frock into your evening wear like Dakota and Elle Fanning or rocking a bold twin set like Solange and Beyoncé,... Will Missguided's new Manchester headquarters be 'the coolest office in the world?' How Missguided Founder Nitin Passi Created an $80 Million Business in Five Years. Nitin Passi founded Missguided, the U.K. based fast fashion retailer, at the height of the 2008 recession -- an awfully good time to launch a value-focused retail venture online. 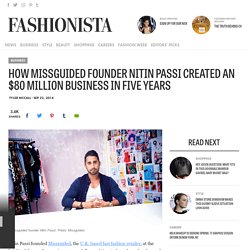 (Gilt Groupe and the Outnet took off the same year.) Now, five years after launch, Missguided has grown into an $80 million dollar business rapidly expanding beyond its Brit borders, first to the U.S., with plans for France, Germany and Sweden to follow in 2015. Yet Passi had very little business experience when he launched the site on his own. So how did he do it? We hopped on the phone with Passi to get the full story, learning about his early mistakes in marketing and how he developed one of the fastest supply chains in the business. I was hoping you could start by talking about your previous business experience.