Kali Linux Custom Image Downloads - Offensive Security. Libreboot – Downloads. Back to previous index The latest stable release is 20160907, released on 2016-09-07 and can be found at #https. 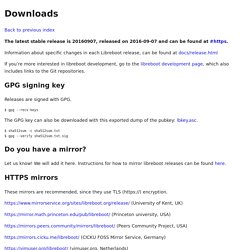 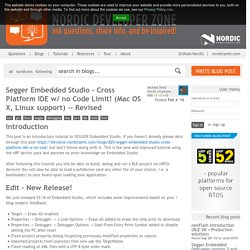 If you haven't already please skim through this post but don't follow along with it. This is the new and improved tutorial using the nRF device pack and assumes no prior knowledge on Embedded Studio. After following this tutorial you will be able to build, debug and run a BLE project on nRF5x devices! You will also be able to load a softdevice (and any other file of your choice, i.e. a bootloader) to your board upon loading your application. nRF51 Bootloader without Softdevice SDK 8.1.0 - Nordic Developer Zone. Developer.nordicsemi.com:/nRF5_SDK/nRF5_SDK_v12.x.x/ Arduino - Entradas e Saídas digitais - Embarcados. Homemade Electronic Drum kit with Arduino Mega2560 - All. *=Optional - Wood. 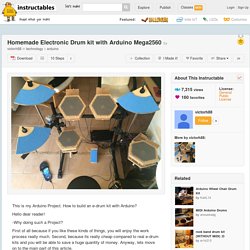 You will need different measures of wood. I used 16mm and 10mm MDF for the Drum pads and then 5mm plywood for the Cymbals. Vida de Programador. "YOU WON'T BELIEVE YOUR EYES!" - Smarter Every Day 142.

Nueva manera de hackear claves wifi WPA/WPA2 2013. Top 10 NEW Platform Games of 2015Geeks are Sexy Technology News. Some people like to claim platform games have gone extinct in the last few generations, but they could not be further from the truth. 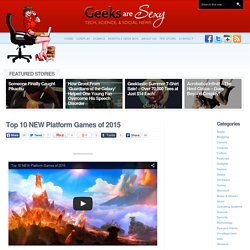 From phone games to open world platform games that are twice the size of anything we ever dreamt of when we were kids, here are 10 awesome new platform games for 2015. [Via Gameranx] Tags: 2015, best platformers, game, Games, list, platform games, platformers. AC Waveforms : Basic AC Theory. When an alternator produces AC voltage, the voltage switches polarity over time, but does so in a very particular manner. 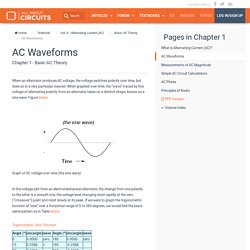 When graphed over time, the “wave” traced by this voltage of alternating polarity from an alternator takes on a distinct shape, known as a sine wave: Figure below Graph of AC voltage over time (the sine wave). In the voltage plot from an electromechanical alternator, the change from one polarity to the other is a smooth one, the voltage level changing most rapidly at the zero (“crossover”) point and most slowly at its peak. If we were to graph the trigonometric function of “sine” over a horizontal range of 0 to 360 degrees, we would find the exact same pattern as in Table below. Electrónica Básica. Documento sin título. 'Introduction to the S110 SoftDevice' Introduction to the S110 SoftDevice on nRF51822. 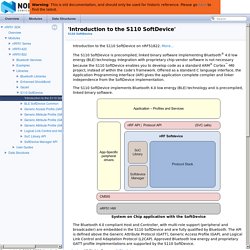 More... The S110 SoftDevice is precompiled, linked binary software implementing Bluetooth® 4.0 low energy (BLE) technology. Integration with proprietary chip-vendor software is not necessary because the S110 SoftDevice enables you to develop code as a standard ARM® Cortex™-M0 project, instead of within the code's framework. Offered as a standard C language interface, the Application Programming Interface (API) gives the application complete compiler and linker independence from the SoftDevice implementation. 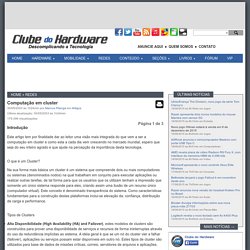 O que é um Cluster? Comando básicos de administração de sistemas no Linux. Cluster: conceito e características. General Electronics-Tech. Turn your EAGLE schematic into a PCB : Start placing the components. Now we need to move the components to (near) where we want them on the final board. 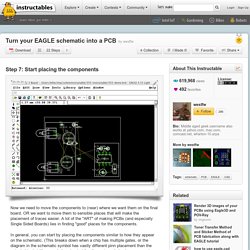 OR we want to move them to sensible places that will make the placement of traces easier. A lot of the "ART" of making PCBs (and especially Single Sided Boards) lies in finding "good" places for the components. How to Use a Breadboard. Favorited Favorite 13 Introduction Breadboards are one of the most fundamental pieces when learning how to build circuits. 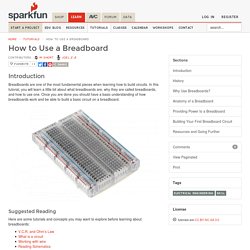 In this tutorial, you will learn a little bit about what breadboards are, why they are called breadboards, and how to use one. EAGLE Help: Editor Commands. Onbit - Power Banks. A Minha Casa Digital... How to use gas sensors with Arduino. CHIP - The World's First Nine Dollar Computer by Next Thing Co. Scratch - Imagine, Program, Share. IP Addressing and Subnetting. Cadsoft Eagle PCB design tutorial. Microcontroller - Program Transfer Part 2 (Drivers) - A Beginners Guide to the Atmel AVR Atmega32. Microcontroller - A Beginners Guide - Transferring a Program into the Microcontroller Part 2 (Drivers) By now, you should have constructed the SPI interface. 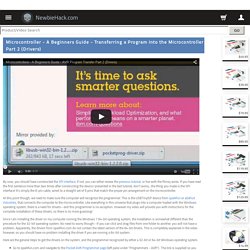 If not, you can either review the previous tutorial, or live with the flimsy wires. If you have read the first sentence more than two times after constructing the device I presented in the last tutorial, don't worry...the thing you made is the SPI interface! It's simply the 6-pin cable, wired to a straight set of 6 pins that match the proper pin arrangement on the microcontroller. At this point though, we need to make sure the computer will recognize the programmer. Since I am installing the driver on my computer running the Windows 7 64-bit operating system, the installation is somewhat different than the procedure for the 32-bit operating system.

Here are the general steps to get the drivers on the system, and the programmer recognized by either a 32-bit or 64-bit Windows operating system. How to Use a Breadboard. Biblioteki EAGLE 6.x.x. Best Online Courses. FingerReader. Roy Shilkrot, Jochen Huber, Meng Ee Wong, Pattie Maes, and Suranga Chandima Nanayakkara. "FingerReader: a wearable device to explore text reading on the go".

Electronic Circuits and Diagram-Electronics Projects and Design. KTOWN's Ultimate Creating Parts in Eagle Tutorial. Now that we've specified the size of our new pad (0.6 x 0.6 mm in this case), it's time to place it in our package. This is where you really need to have a bit of attention to detail, since pad size and placement is critical to creating a functional and manufacturable footprint! Selecting the 'Smd' tool (the red box in bottom of the the left-hand toolbar), and adjusting the 'Smd Size' to 0.6 x 0.6 on a mm grid, we should see something similar to the following if you zoom in or out a bit: If you zoom in, you can see that this pad is indeed 0.6mm x 0.6mm thanks to the 0.1mm grid lines we've set.

The pad should align perfectly with six 'squares' in each direction on the grid. Biblioteki EAGLE 6.x.x. Using EAGLE: Board Layout. Favorited Favorite 1 EAGLE’s board designer is where a good portion of the magic happens. It’s here where the dimensions of the board come together, parts are arranged, and connected by copper traces. In the board editor, the conceptual, idealized schematic you’ve designed becomes a precisely dimensioned and routed PCB. In this tutorial we’ll cover every step in EAGLE PCB design: from placing parts, to routing them, to generating gerber files to send to a fab house. Using EAGLE: Board Layout. Favorited Favorite 1 Create a Board From Schematic If you haven’t already, click the Generate/Switch to Board icon – – in the schematic editor to create a new PCB design based on your schematic: The new board file should show all of the parts from your schematic.