Born that way? ‘Scientific’ racism is creeping back into our thinking. Here’s what to watch out for. By W. 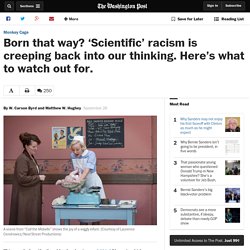 Carson Byrd and Matthew W. Hughey September 28 A scene from “Call the Midwife” shows the joy of a wiggly infant. (Courtesy of Laurence Cendrowicz/Neal Street Productions) The history of interracial sex: It&apos;s much more than just rape or romance. When South African comedian Trevor Noah takes over as host of "The Daily Show" on Monday night, he'll probably introduce his new audience to his family biography. 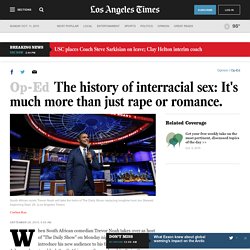 Born in Johannesburg to a black South African mother and a white Swiss German father in 1984, when apartheid was still firmly in place and interracial marriage was illegal, Noah made his parents' struggles the subject of his widely acclaimed stand-up routine "Born a Crime. " Their story represents an exception to one of apartheid's harshest realities: White men sexually violated black women with impunity. But neither is it a romantic tale of racial transcendence. Noah has been frank about how his Xhosa mother paid the greater price for her relationship with a white man. Not only did she face social stigma and arrest, she was also left to raise Noah alone when his father exercised his white male privilege and left South Africa. How Slavery's Legacy Affects the Mental Health of Black Americans. On July 22, in announcing the federal indictment of Charleston killer Dylann Roof, Attorney General Loretta Lynch commented that the expression of forgiveness offered by the victims’ families is “an incredible lesson and message for us all.” 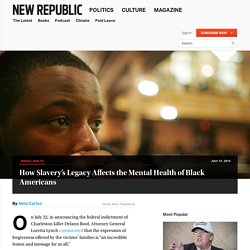 Forgiveness and grace are, indeed, hallmarks of the Black Church. Since slavery, the church has been a formidable force for the survival of blacks in an America still grappling with the residual effects of white supremacy. This was eloquently illustrated in the aftermath of the Charleston church massacre. Subjects Without an Empire: The Irish in the Early Modern Caribbean. During the seventeenth century, thousands of Irish men and women were unwilling migrants to the Caribbean, ‘barbadoesed’ to toil in tobacco or cane fields or deported following the post-1641 Ulster uprising and Cromwellian reprisals. 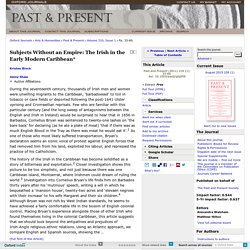 Few who are familiar with this particular century (and the long sweep of antagonisms between the English and Irish in Ireland) would be surprised to hear that in 1656 in Barbados, Cornelius Bryan was sentenced to twenty-one lashes on ‘the bare back’ for declaring (as he ate a plate of meat) ‘that if there was as much English Blood in the Tray as there was meat he would eat it’.1 As one of those who most likely suffered transportation, Bryan’s declaration seems an iconic voice of protest against English forces that had removed him from his land, exploited his labour, and repressed the practice of his Catholicism. The forgotten history of Britain's white slaves. Dominic Sandbrook reviews White Cargo: the Forgotten History of Britain's White Slaves in America by Don Jordan and Michael Walsh In April 1775, two days after the American War of Independence began, a notice appeared in the Virginia Gazette offering rewards for the return of 10 runaways. 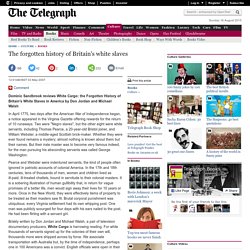 Two were "Negro slaves", but the other eight were white servants, including Thomas Pearce, a 20-year-old Bristol joiner, and William Webster, a middle-aged Scottish brick-maker. Whether they were ever found remains a mystery; almost nothing is known about them but their names. But their irate master was to become very famous indeed, for the man pursuing his absconding servants was called George Washington. 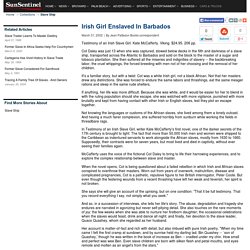 Kate McCafferty. Viking. $24.95. 206 pp. Cot Daley was just 13 when she was captured, stowed below decks in the filth and darkness of a slave ship, transported across the Atlantic to Barbados and sold on the block to the master of a sugar and tobacco plantation. She then suffered all the miseries and indignities of slavery -- the backbreaking labor, the cruel whippings, the forced breeding with men not of her choosing and the removal of her children. How accurate is the proclamation that Irish slavery in America was as prolific as African slavery? : AskHistorians. The Irish Were Slaves Too. Why Does It Not Get Discussed Much? Tangled Roots: "Barbadosed": Africans and Irish in Barbados. Barbadosed Africans and Irish in Barbados During the 1600's, African slaves and Irish natives shared a common fate on the island of Barbados. 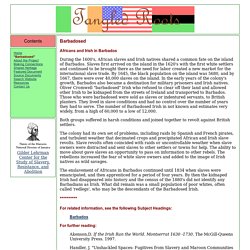 Slaves first arrived on the island in the 1620's with the first white settlers and continued to be brought there as the need for labor created a new market for the international slave trade. By 1645, the black population on the island was 5680, and by 1667, there were over 40,000 slaves on the island. Irish Slavery. Irish Slavery by James F. 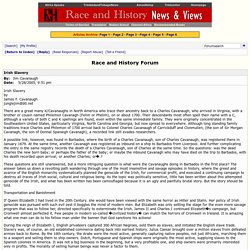 Cavanaugh junglejim@btl.net There are a great many K/Cavanaughs in North America who trace their ancestry back to a Charles Cavanaugh, who arrived in Virginia, with a brother or cousin named Philemon Cavanagh (Felim or Phelim), on or about 1700. Were the Irish Slaves? Were the Irish slaves or not? 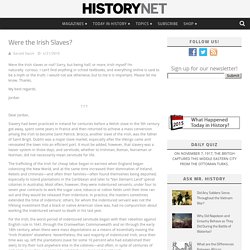 Sorry, but being half, or more, Irish myself I’m naturally curious. I can’t find anything in school textbooks, and everything online is said to be a myth or the truth. I would not ask otherwise, but to me it is important. Please let me know. Thanks. The Myth of “Irish Slaves” in the Colonies. Were well informed about comparative wage rates and knew that they would be better paid in the West Indies than Virginia. 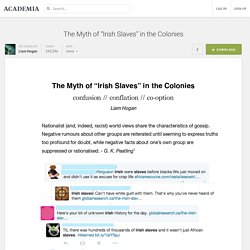 So Captain Anthony was forced to change his plans and to make St Christopher his destination: this is where most of them wanted to go..[...]..ﬁfty-three survived the journey to St Christopher [there were eight deaths], where their contracts were sold for between 450 and 500 pounds of tobacco apiece. Once an indentured servant’s term of service was over they received their “freedom dues” which was around £10 sterling, or its equivalent in tobacco or sugar.

They were now free, with cash in hand. If they wished they could lease or buy land, buy or trade in slaves or hire them out to others. Alternatively they could migrate to another colony where there were better opportunities. ‘Irish slaves’: the convenient myth. The conflation of indentured servitude with chattel slavery in the ‘Irish slaves’ narrative whitewashes history in the service of Irish nationalist and white supremacist causes. Its resurgence in the wake of Ferguson reflects many Americans’ denial of the entrenched racism still prevalent in their society. It was with a heavy heart and no small amount of anger that I decided it was necessary to write a public refutation of the insidious myth that the Irish were once chattel slaves in the British colonies. The subject of this myth is not an issue in academic circles, for there is unanimous agreement, based on overwhelming evidence, that the Irish were never subjected to perpetual, hereditary slavery in the colonies, based on notions of ‘race’.

Unfortunately this is not the case in the public domain and the ‘Irish slaves’ myth has been shared so frequently online that it has gone viral. I Don’t Want to Be an Excuse for Racist Violence in Charleston. We cannot talk about the violence that Dylann Roof perpetrated at Emanuel AME last Wednesday night without talking about whiteness, and specifically, about white womanhood and its role in racist violence. We have to talk about those things, because Roof himself did. Per a witness account, we know that he said: “You rape our women and you’re taking over our country.” History_of_slavery. Behind The Racist Hashtag That Is Blowing Up Twitter. Error 403. Southern Horrors: Lynch Law in All Its Phases by Ida B. Wells-Barnett. The deadly history of “They’re raping our women”: Racists have long defended their worst crimes in the name of defending white women’s honor. Photo by Lexington County Sheriff’s Department/Reuters Amid his Wednesday night rampage at Emanuel African Methodist Episcopal Church in Charleston, South Carolina—killing nine people—21-year-old Dylann Storm Roof reportedly told churchgoers, “You rape our women, and you’re taking over our country, and you have to go.”

Jamelle Bouie is a Slate staff writer covering politics, policy, and race. Of the assertions in that statement, it’s the first that has a long, deadly history. What Science Says About Race and Genetics. The New York Times' former science editor on research showing that evolution didn't stop when human history began.

A longstanding orthodoxy among social scientists holds that human races are a social construct and have no biological basis. A related assumption is that human evolution halted in the distant past, so long ago that evolutionary explanations need never be considered by historians or economists. What Science Says About Race and Genetics. How Women May Have Shaped Men’s Penises. White children nearly a minority, says US census. 13 June 2013Last updated at 17:18 GMT White babies are expected to soon become a minority of US newborns For the first time, half (49.9%) of American children under the age of five are of a racial or ethnic minority, according to the US Census Bureau.

The agency projected that in the US, whites would become a minority in the under-five age group this year or next. The 2012 data also found that for the first time in more than a century, there were more deaths than births among white Americans. The "natural decrease" occurred several years earlier than forecast, it said. Attention, Ladies: Semen Is An Antidepressant. Testosterone Deficiency, Erectile Dysfunction, and Testosterone Replacement Therapy. Crying Over Spilled Semen.

The Sapphire stereotype. Miller-young_essay_1_2-2. Putting Hypersexuality to Work: Black Women and Illicit Eroticism in Pornography (Mireille Miller-Young) Solidarity is For Miley Cyrus: The Racial Implications of her VMA Performance. Mireille Miller-Young – Can the ho’s speak? Black sex workers and the politics of deviance, defiance and desire.