Aatrox Build Guide - Top Lane - By SYDTKO. Annie Build Guide - Mid Lane - By Kritical Kill. AATROX BUILD GUIDE: MONSTER Sustain in the MIDDLE by I Play Supportlu. Item Builds Early game I love to start Elixir of fortitude and 3 health potions because of the amount of burst you get at level 3-6. 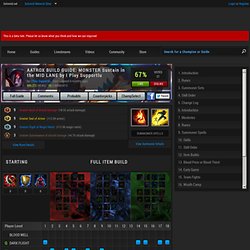 The health potions help keep you alive until level 6 where you can pop the fortitude potion if you haven't already, and 1 shot the enemy APC. I like to start fortitude potion because it is good for baiting the enemy APC to tower dive you if your low. If they dive you just pop the potion and you gain an instant 100+ Hp. Also even if you do die after popping the Fortitude potion you will still keep the effects of it for 3 minutes. This item is really good on Aatrox. I like to build this item on Aatrox so he can split push and clear jungle camps very quickly. AATROX BUILD GUIDE: Aatrox - The Unbeatable Toplaner by HereIsJohnny. Passive: Blood Well Explanation: Whenever Aatrox uses an ability that costs health he stores 100% of that health in his "blood well". 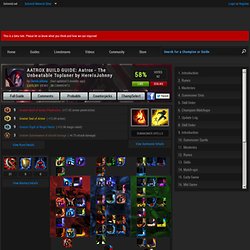 I take this a level 2 because it allows me to jump over escape early jungle ganks. AATROX BUILD GUIDE: An Aatrox by Xpecial. Shyvana Build Guide : Shyvana Dovahkiin. Introduction With the introduction of the new Update for Season 3 I will have to get on-date about changes, as soon as im ready to post all changes that will be made to my Shyvana guide I will post them here =) First of all, I want to say thank you to everyone who made this possible. 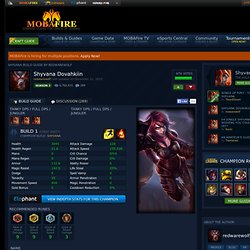 THANK YOU VERY MUCH! I never thought this could be possible but I made it to top one :D Shyvana is a melee champion, she can be from, a very good tanky dps, to a full damage carry, my build always depends on the enemy team, but usually go for tanky dps (like shown in the first build). Dragon's Descent) if you are in trouble. Shyvana is also well known for her jungling speed, you can take jungle creeps very quick compared to some junglers but she doesnt have any natural CC or strong ganking but with exhaust you will easily be able to pick up some kills and help your teammates in their lanes if you choose to take the jungling path. Lore. Jax Build Guide : jax - solo top and jungling - ranked (inspired by WickD) Info! 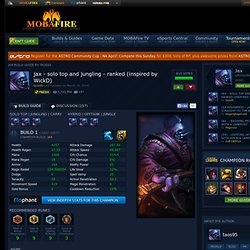 I outline the important things in light green. So you don't need to read the whole guide, but only the sentences outlined in green. MALPHITE BUILD GUIDE: Crushing the Meta with MALPHITE (Laning/Jungle) by Dolphin Trainer. After some controversy of jungle speed, and attack speed runes I'll be testing a set-up of Attack speed runes, resist and etc. for Malphite and testing out more builds as suggested from other players. 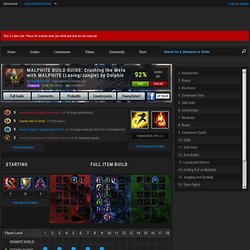 Currently interested in: Attack speed runes/set-ups to increase jungle-speed Building Rylais on Malphite, for constant AoE slow Gold/5 being built solo-t If you're wondering how a 1,500 got his guide featured: I'm currently dodging to 1,500 from 2070 to climb the ladder again with a few heroes I've never played before. It's a hobby of mine. April 1 2;27 AM: Updated guide: Sorry for not updating in 78 days! Removed wriggles, it's completely pointless unless using attack speed runes which I dislike.Removed Atmas it proved to be purchase that was not as efficient as other items.Added a section on what to do as a 'fed' jungler or solo-lane.Rylai's proved to be very efficient against bruisers.Reworded a most chapters, and removed a few paragraphs that were not needed. Warwick Build Guide - Top Lane - By Youngbuck. Shyvana Build Guide : Shyvana Dovahkiin. 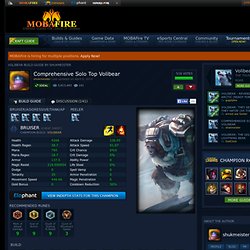 My name is shukmeister and welcome to my Volibear guide! Since day one playing League, Voli stuck out from the crowd as my undoubtedly favorite character. We share a lot in common: - We are both Russian - We are both furry (hell yea beards) - We both yell a lot More importantly, however, is the unique mixture of health and attack speed which makes Voli the beastly champion he is. As the most underappreciated champ in League, Volibear has been subject to metagolem mentality that has crippled his potential.

Voli is NOT a tank. Chosen of the Storm and Frenzy, his initiation is sub par and he has no damage mitigation ability. Voli is also a very sub-optimal jungler. This guide will teach you proper Volibear gameplay, mentality, and build structure. If confused about any terminology, the last chapter explains all the terms used in this guide. Karma Build Guide : Charismatic Karma. Intro Spaaacce Welcome to my Karma guide! 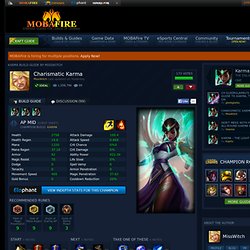 If you want to play a champion that can be played as an AP carry or Support then Karma is a good pick! Karma has lost some good things (her heal) and some bad things (that ugly chain). Karma player. KHA'ZIX BUILD GUIDE: Kill. Consume. Adapt. by Pitsis21. This whole Dominion section was made by a friend of mine and not by me, so credits to him :) Hey there, I'm CoenA and I've been playing Dominion since release on/off. 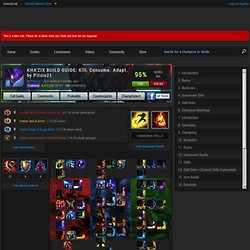 I'm at a relatively high dominion elo, you can sometimes see my name on the Featured Games screen in the client. I have a roughly 90% win ratio with Khazix since I started playing him over 20 games in high elo. He's very overpowered on Dominion if played correctly because of how good he is in every part of the game. He has high mobility, high damage and can build tanky. Runes - 25 Armor Pen, Hp/lvl Yellows, MR/lvl blues -> Per level runes are generally superior in Dominion because you start off at lvl 4.