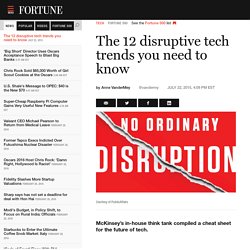 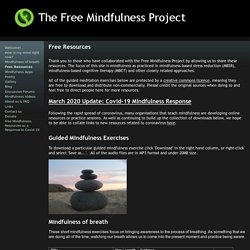 All of the audio files are in MP3 format and under 20MB size. Mindfulness of breath These short mindfulness exercises focus on bringing awareness to the process of breathing. As something that we are doing all of the time, watching our breath allows us to come into the present moment and practice being aware. Brief mindfulness practices Body scan Body scan meditations invite you to move your focus of attention around the body, being curious about your experience and observing any sensations that you become aware of.

Sitting meditations Sitting meditations often use the breath as the central focus of the practice. Mindful movement Mindful movement practices involve some form of intentional movement such as walking, yoga, tai chi or simple stretching. Guided imagery Self Guided Mindfulness Exercises. UCLA Mindful Awareness Research Center. Video-creation-home. In New York, A Tale of Two Cities (and Two Selves) Blackboard. Being a Continual Learner. 7 Hot Technology Trends in 2014 (AAPL) By Eric Bleeker, CFA and Evan Niu, CFA | More Articles | Save For Later January 17, 2014 | It's a good time to be a technology investor. 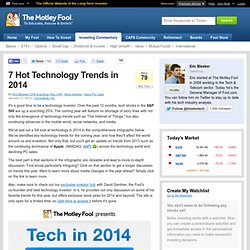 Over the past 12 months, tech stocks in the S&P 500 are up a scorching 25%. 15 Tech Companies That Will Define 2014 (AAPL, AMZN, BRCM, GOOG, INVN, NFLX, QCOM) Insider Trading Stock Screener - SecForm4.Com. Fool Reports. Having the right information at the right time could mean the difference between making a lot of money in the stock market and getting hosed. 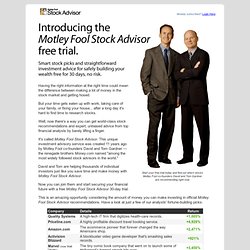 But your time gets eaten up with work, taking care of your family, or fixing your house... after a long day it's hard to find time to research stocks. Well, now there's a way you can get world-class stock recommendations and expert, unbiased advice from top financial analysts by barely lifting a finger. It's called Motley Fool Stock Advisor. This unique investment advisory service was created 11 years ago by Motley Fool co-founders David and Tom Gardner — the renegade brothers Money.com named "among the most widely followed stock advisors in the world. " David and Tom are helping thousands of individual investors just like you save time and make money with Motley Fool Stock Advisor. 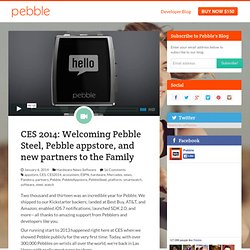 We shipped to our Kickstarter backers; landed at Best Buy, AT&T, and Amazon; enabled iOS 7 notifications; launched SDK 2.0; and more—all thanks to amazing support from Pebblers and developers like you. Our running start to 2013 happened right here at CES when we showed Pebble publicly for the very first time. Today, with over 300,000 Pebbles on wrists all over the world, we’re back in Las Vegas with really great news to share. First, we’re getting ready to launch the Pebble appstore—the very first open platform for sharing apps optimized for wearables. The appstore will live within the existing Pebble app on your iOS or Android device, so you can find and download Pebble apps directly from your smartphone. Until now, Pebblers discovered apps and watchfaces thanks to wonderful third party resources like MyPebbleFaces.

Philip Arthur Fisher. Philip Arthur Fisher (September 8, 1907 – March 11, 2004) was an American stock investor best known as the author of Common Stocks and Uncommon Profits, a guide to investing that has remained in print ever since it was first published in 1958. 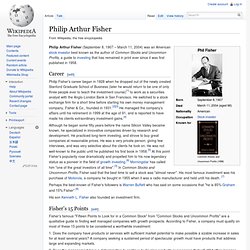 Career[edit] Philip Fisher's career began in 1928 when he dropped out of the newly created Stanford Graduate School of Business (later he would return to be one of only three people ever to teach the investment course)[1] to work as a securities analyst with the Anglo-London Bank in San Francisco. He switched to a stock exchange firm for a short time before starting his own money management company, Fisher & Co., founded in 1931.[2][3] He managed the company's affairs until his retirement in 1999 at the age of 91, and is reported to have made his clients extraordinary investment gains.[4] Although he began some fifty years before the name Silicon Valley became known, he specialized in innovative companies driven by research and development. Nimble Storage soars: Stock up 49% following IPO. Nimble Storage (NMBL), which makes a flash-optimized hybrid storage platform, just made its debut on the New York Stock Exchange — and market sentiment is hugely positive. 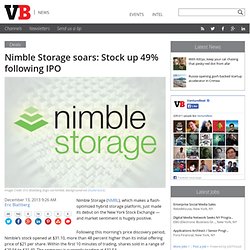 Following this morning’s price discovery period, Nimble’s stock opened at $31.10, more than 48 percent higher than its initial offering price of $21 per share. Within the first 10 minutes of trading, shares sold in a range of $29.56 to $31.49. The company is currently trading at $31.54. Nimble sold 8 million shares, raising $168 million at a market valuation just below $1.5 billion. At $31.10, the storage firm would have a market capitalization of more than $2.1 billion.

With $84 million in revenues as of Oct. 31, Nimble is on track to top $100 million in revenue this fiscal year — a steep increase from its 2012 total of $53.8 million. The Greatest Investors: Thomas Rowe Price, Jr. Personal ProfileThomas Rowe Price spent his formative years struggling with the Depression, and the lesson he learned was not to stay out of stocks but to embrace them. 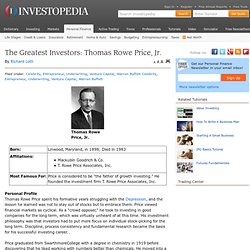 Price viewed financial markets as cyclical. As a "crowd opposer," he took to investing in good companies for the long term, which was virtually unheard of at this time. His investment philosophy was that investors had to put more focus on individual stock-picking for the long term. Billion-Dollar Startup Club.