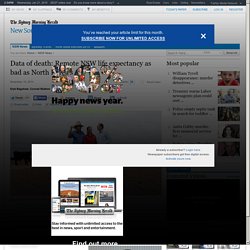 Can I afford to live until 100? Australians ask, as life expectancy booms. It seems like we are living longer than ever before with the life expectancy at an all-time high. 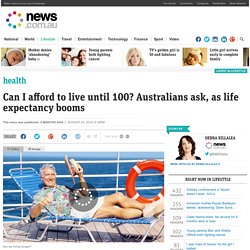 Screen for disadvantage to cut deaths: health chief. Health of patients of poverty: Economic status has been found to be linked to disease. 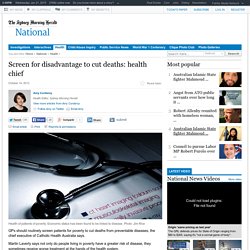 Photo: Jim Rice GPs should routinely screen patients for poverty to cut deaths from preventable diseases, the chief executive of Catholic Health Australia says. Martin Laverty says not only do people living in poverty have a greater risk of disease, they sometimes receive worse treatment at the hands of the health system. ''There is evidence that poverty poses a risk to health equivalent to high cholesterol and smoking,'' he said. Patients' healthcare bills among world's highest. Could not load plugins: File not found Medicare no more? 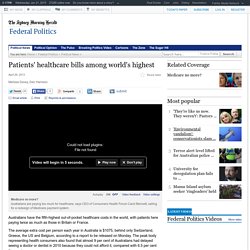 Australians are paying too much for healthcare, says CEO of Consumers Health Forum Carol Bennett, calling for a redesign of Medicare payment system Australians have the fifth-highest out-of-pocket healthcare costs in the world, with patients here paying twice as much as those in Britain or France. The average extra cost per person each year in Australia is $1075, behind only Switzerland, Greece, the US and Belgium, according to a report to be released on Monday.

The peak body representing health consumers also found that almost 9 per cent of Australians had delayed seeing a doctor or dentist in 2010 because they could not afford it, compared with 6.5 per cent the previous year. The chief executive of the Consumers Health Forum, Carol Bennett, said the provider-driven Medicare system was failing patients. Annual loss recorded: a year in the life of death. It tells us as much about life as it does about death. 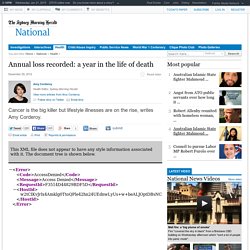 The Bureau of Statistics' causes of death data paints a picture of nearly 150,000 lives which ended in 2010. Some lingered, some disappeared in the blink of an eye. More than 43,000 people were taken by the Big C, even more by circulatory conditions like heart disease. Financial Review - News Store. Extreme obesity has increased to the point that people are losing sight of what a normal weight is, experts say. 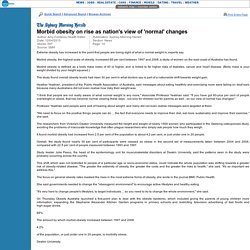 Morbid obesity, the highest scale of obesity, increased 68 per cent between 1997 and 2008, a study of women on the east coast of Australia has found. Morbid obesity is defined as a body mass index of 40 or higher, and is linked to far higher risks of diabetes, cancer and heart disease. (Body mass is your weight divided by your height squared.) The study found overall obesity levels had risen 30 per cent in what doctors say is part of a nationwide shift towards weight gain. The diabetes time bomb. Sugar shock: Diabetes will soon be Australia's number one killer. 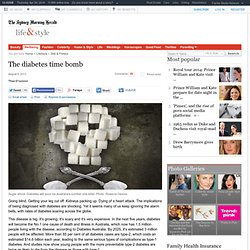 Photo: Rowena Dennis Going blind. Getting your leg cut off. Australia 'running out of money' for Medicare: Hockey. Joe Hockey: A focus on economic growth and jobs Treasurer Joe Hockey outlines the issues that will be discussed at this weekend's G20 meeting. 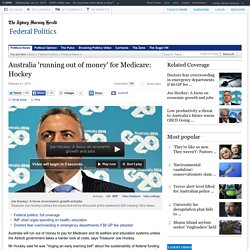 Nine News. Australia will run out of money to pay for Medicare and its welfare and education systems unless the Abbott government takes a harder look at costs, says Treasurer Joe Hockey. Mr Hockey said he was ''ringing an early warning bell'' about the sustainability of federal funding for vital programs, saying hard work will be needed in the future just to maintain the quality of life expected by most Australians. Pension at 70? Start saving now. An aging population means ballooning government outlays to fund retirement are going to be pared back. 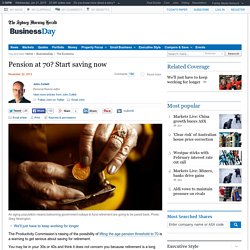 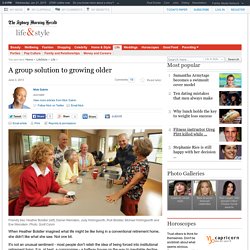 Photo: Scott Calvin. 3D Printing Helps Life Saving Heart Surgery. Laura Olivieri, a paediatric cardiologist, displays a heart model created by a 3-D printer. Photo: Amanda Voisard for The Washington Post It may sound like something out of science fiction, but doctors at Children's National Medical Centre in Washington, DC, are making hearts. Not actual hearts, but three-dimensional synthetic models churned out by what looks like an ordinary printer. The printer uses data from individual patients to replicate the organs of those individuals, reflecting their particular intricacies and deformities.

The devastating costs of sugar. Full of sugar ... how much is there in what you drink? Photo: Credit Suisse Food manufacturers could be facing their tobacco moment as growing consumer awareness on well-being turns towards commodities such as sugar, a global report says. The report on sugar, compiled by the Credit Suisse Research Institute, highlights the need for the food and beverage industry to tackle the focus on obesity head-on by joining a diversification into new healthier products. “The potential for a surge in negative public opinion and the looming threat of regulation and taxation are issues that the food and beverage industry clearly must address, though the extent to which they can do so without hurting their current business models is up for question,” said the report’s authors, Giles Keating, Credit Suisse’s research head for Private Banking and Wealth Management, and Stefano Natella, the financial services firm’s co-head of Global Securities Research.

As a society we must take action. Illustration: David Rowe When you first see the youngest Aboriginal kids in the remote Northern Territory communities, it is their size that is striking. They are so small and malnourished in a country that sells food to the world. When you see their overcrowded homes, there is never enough food on the table for all the hungry mouths. The poverty is confronting. Everything we have provided other Australian kids seems missing. Healthcare: Why Tony Abbott wants to charge a fee for visiting bulk-billing doctors. Coalition considers end to free GP visits The Abbott government is refusing to rule out a fee for every GP visit in a bid to rein in health spending.

Nine news. Why would the government consider an unpopular new fee on bulk-billed GP visits? Answer: because there are few budget challenges bigger than healthcare costs. Healthcare budget stress: Prime Minister Tony Abbott. Medicare is a huge item of federal government expenditure. Advertisement A list of its 20 most expensive federal programs published in May underscores this. John Glover voices fears GP fee will make poor suffer. Hospitals shut door on public patients as strain worsens. "Lots of clinics have reached a point where they say they are not taking any more patients because their waiting list for an appointment is two years" : AMA NSW President Brian Owler.

Photo: Danielle Smith Up to 10,000 people are on so-called hidden waiting lists to see doctors in some parts of NSW, and hospital clinics are refusing new public patients because their waiting lists are so long - leaving people without private health insurance stuck without care. Australian Medical Association NSW president Brian Owler said as waiting lists for public hospital treatment lengthened, some hospitals had given up trying to cope. Four-year surgery wait. Obesity problem most acute in rural areas. Least obese: Sydney north shore and northern beaches only accounts for 14% of obesity in NSW. Life expectancy: Will we just keep getting older? A decade ago an Australian man who had just turned 65 could expect to live another 17.6 years.

Rafael Nadal shows off his high-tech tennis racquet at Australian Open. When Does Technology Cross From 'Progress' to 'Cheating? An Examination of a Century's Advancements. Swans' new sleep pods - sydneyswans.com.au. It may look like something out of a sci-fi movie but the premise behind the latest addition to the Sydney Swans changeroom is simple – the more you sleep, the better you perform.

With footballers spending the majority of their day training and preparing their bodies for the rigours of the AFL season, there is an increasing need to rest and recover. Thanks to the new sleep pods at the club, players can get away for up to 25 minutes for a power nap which will help them stay more alert, be more active, reduce tiredness and actually improve performance.