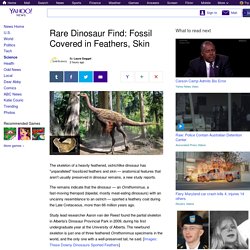 The remains indicate that the dinosaur — an Ornithomimus, a fast-moving theropod (bipedal, mostly meat-eating dinosaurs) with an uncanny resemblance to an ostrich — sported a feathery coat during the Late Cretaceous, more than 66 million years ago. Study lead researcher Aaron van der Reest found the partial skeleton in Alberta's Dinosaur Provincial Park in 2009, during his first undergraduate year at the University of Alberta. The newfound skeleton is just one of three feathered Ornithomimus specimens in the world, and the only one with a well-preserved tail, he said. [Images: These Downy Dinosaurs Sported Feathers] "It's pretty remarkable. Modern ostriches also have exposed bare skin, which they use to regulate their body temperature, the researchers said in the study. View gallery.

What is "Brain-Based Learning"? - Brain Connection. The Organ of Learning To many, the term “brain-based learning” sounds redundant. 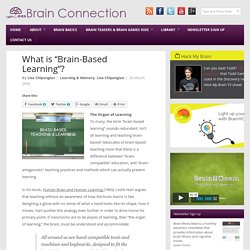 Isn’t all learning and teaching brain-based? Advocates of brain-based teaching insist that there is a difference between “brain-compatible” education, and “brain-antagonistic” teaching practices and methods which can actually prevent learning. In his book, Human Brain and Human Learning (1983), Leslie Hart argues that teaching without an awareness of how the brain learns is like designing a glove with no sense of what a hand looks like–its shape, how it moves. Hart pushes this analogy even further in order to drive home his primary point: if classrooms are to be places of learning, then “the organ of learning,” the brain, must be understood and accommodate: All around us are hand-compatible tools and machines and keyboards, designed to fit the hand. 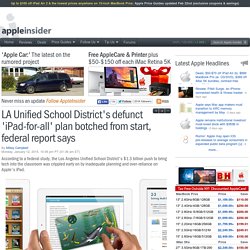 A U.S. Education Department review found the LAUSD iPad in education initiative, first announced last June, to be fraught with financial and administrative problems from its inception, reports the Los Angeles Times. Headed by Richard Culatta, director of the Office of Educational Technology, the review found "iPad-for-all" put too strong an emphasis on Apple's hardware and software ecosystem, distracting from less-expensive options that could have saved money. The Crowdsourced Company Building Elon's Hyperloop Is Going Public. HTT/JumpStartFund The company that’s working to bring Elon Musk’s Hyperloop to reality is going public, it announced this afternoon. 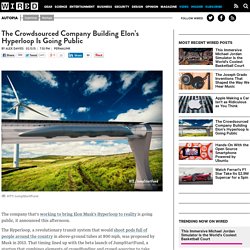 The Hyperloop, a revolutionary transit system that would shoot pods full of people around the country in above-ground tubes at 800 mph, was proposed by Musk in 2013. That timing lined up with the beta launch of JumpStartFund, a startup that combines elements of crowdfunding and crowd-sourcing to take ambitious ideas and move them toward reality. So JumpStartFund created Hyperloop Transportation Technologies, Inc. The company brought together a group of nearly 200 engineers all over the country who spend their free time spitballing ideas in exchange for stock options (which will now vest), and have day jobs at places like Boeing, NASA, Yahoo! The Hyperloop Transportation Technologies direct public offering is planned for the third quarter of 2015, and the $100 million will be put toward developing a usable prototype. Elon Musk says Texas is “a leading candidate” for his futuristic Hyperloop test track. 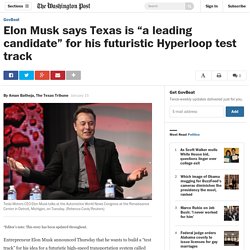 (Rebecca Cook/Reuters) *Editor’s note: This story has been updated throughout. A startup is raising $80 million to make Elon Musk's insane Hyperloop fantasy a reality. Elon Musk's dream of a Hyperloop is a step closer to becoming reality, according to a Forbes report . 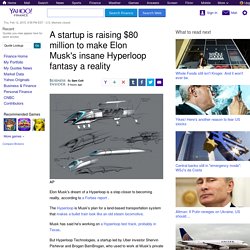 The Hyperloop is Musk's plan for a land-based transportation system that makes a bullet train look like an old steam locomotive. Musk has said he's working on a Hyperloop test track, probably in Texas. But Hyperloop Technologies, a startup led by Uber investor Shervin Pishevar and Brogan BamBrogan, who used to work at Musk's private space company SpaceX, is building its own test track for the Hyperloop. Musk originally wanted the Hyperloop to run between LA and San Francisco, but these guys are thinking it woudl run between California and Las Vegas, if it gets built. 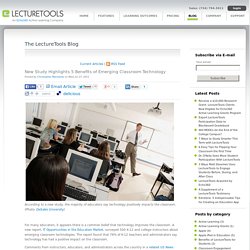 (Photo: DeSales University) Osmo. 3d-printed-model-heart-helps-doctors-save-a-little-108202597809. We’ve seen several accounts of 3D-printing being used to save the lives of patients, and out of Florida comes another such wonderful story. 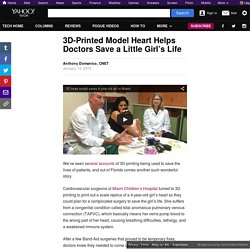 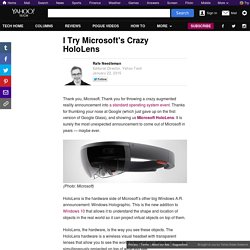 Thank you for throwing a crazy augmented reality announcement into a standard operating system event. Thanks for thumbing your nose at Google (which just gave up on the first version of Google Glass), and showing us Microsoft HoloLens. It is surely the most unexpected announcement to come out of Microsoft in years — maybe ever. (Photo: Microsoft) HoloLens is the hardware side of Microsoft’s other big Windows A.R. announcement: Windows Holographic. HoloLens, the hardware, is the way you see these objects. Fast. Unlike Google Glass, which puts a little image off to the edge of your field of vision, HoloLens can project images over almost all of it. EDUT 522 Student DB Links GG. 7 rules for designing wearable devices. The past year has certainly been an exciting time for the semiconductor industry. 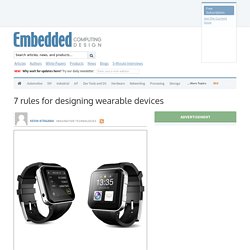 The shared enthusiasm among silicon companies has been on the rise based on the recent level of interest and demand for new products that complement the mobile experience typically based around smartphones and tablets. A main driver behind this phenomenon is wearable technology. Familiar items such as clothing, glasses, jewelry, and watches are being fitted with sensors, processors, and displays – technologies you wouldn’t have expected to find inside these everyday objects before. The potential for this market is quite impressive; ABI Research projects that 32 million sports and fitness wristbands will have shipped in the past twelve months alone. 3D-Printed Heart Valve Makes The Transplant Wait List Bearable. For three days during New York Fashion Week, Plastics Make it Possible offered people the chance to “buy” a limited edition t-shirt designed by Allison Parris. Their vending machine dispensed the t-shirts if a plastic bottles was deposited inside.

The shirts were made with recycled plastic fabric and the initiative wanted to show how recycled materials can become wearable, even chic clothing. Visitors to the Plastics Make it Possible website also got the chance to win a t-shirt, by leaving a comment about what plastics they recycle. A peek inside the 2015 International Consumer Electronics Show. EDUT 522 - Week 1.