Herald Sun article Copy and paste the link to a new tab to go to the article: Kate Grenville on THE LIEUTENANT. Kate Grenville on The Lieutenant. Kate Grenville - Interview. After years of looking for a place to belong, Daniel Rooke’s keen intellect and interest in astronomy won him a place on the 1788 First Fleet voyage to the British colony of New South Wales, now known as Australia. 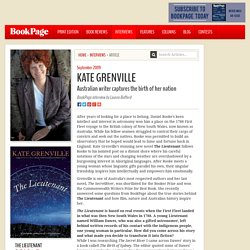 While his fellow seamen struggled to control their cargo of convicts and seek out the natives, Rooke was permitted to build an observatory that he hoped would lead to fame and fortune back in England. Kate Grenville’s stunning new novel The Lieutenant follows Rooke to his isolated post on a distant shore where his careful notations of the stars and changing weather are overshadowed by a burgeoning interest in Aboriginal languages.

After Rooke meets a young woman whose linguistic gifts parallel his own, their singular friendship inspires him intellectually and empowers him emotionally. The Lieutenant. The Lieutenant is the second book in a trilogy of novels by Kate Grenville about early Australia (the others are The Secret River and Sarah Thornhill - for details of these novels click on the links at left). 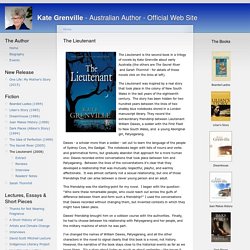 The Lieutenant was inspired by a real story that took place in the colony of New South Wales in the last years of the eighteenth century. The story has been hidden for two hundred years between the lines of two shabby blue notebooks stored in a London manuscript library. They record the extraordinary friendship between Lieutenant William Dawes, a soldier with the First Fleet to New South Wales, and a young Aboriginal girl, Patyegarang. Dawes - a scholar more than a soldier - set out to learn the language of the people of Sydney Cove, the Gadigal. The notebooks begin with lists of nouns and verbs and grammatical forms, but gradually abandon that approach for a more human one: Dawes recorded entire conversations that took place between him and Patyagarang.

Choices, views and values: The Lieutenant. “Difference held no fear for him. 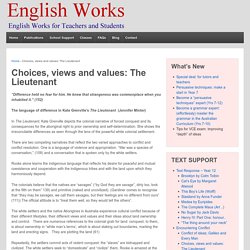 He knew that strangeness was commonplace when you inhabited it.” (152) The language of difference in Kate Grenville’s The Lieutenant (Jennifer Minter) In The Lieutenant, Kate Grenville depicts the colonial narrative of forced conquest and its consequences for the aboriginal right to prior ownership and self-determination. The Lieutenant: Readers' Notes. These days we can hop on a plane and be on the other side of the world in the time it takes to watch a few bad movies and eat a few bad meals. 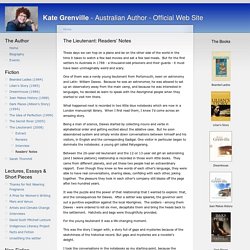 But for the first settlers to Australia in 1788 - a thousand-odd prisoners and their guards - it must have been unimaginably weird and scary. One of them was a nerdy young lieutenant from Portsmouth, keen on astronomy and Latin: William Dawes. Because he was an astronomer, he was allowed to set up an observatory away from the main camp, and because he was interested in languages, he decided do learn to speak with the Aborighinal people when they started to visit him there. What happened next is recorded in two little blue notebooks which are now in a London manuscript library. When I first read them, I knew I'd come across an amazing story. Being a man of science, Dawes started by collecting nouns and verbs in alphabetical order and getting excited about the ablative case. Reading guide for The Lieutenant by Kate Grenville. Please be aware that this discussion guide may contain spoilers! 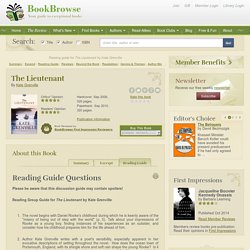 Reading Group Guide for by Kate Grenville The novel begins with Daniel Rooke's childhood during which he is keenly aware of the "misery of being out of step with the world" (p. 5). Talk about your impressions of Rooke as a young boy, finding instances of his experiences as an outsider, and consider how his childhood prepares him for the life ahead of him. Author Kate Grenville writes with a poet's sensibility, especially apparent in her evocative descriptions of setting throughout the novel. How does the ocean town of Portsmouth, England, with its shingle shore and soft rain shape the young Rooke?

Is it a place that symbolizes for him a certain time and mind-set? Further Reading: Guide by Lindsey Tate Unless otherwise stated, this discussion guide is reprinted with the permission of Grove Press. Kate Grenville: The Lieutenant - The Book Show. Ramona Koval: In Kate Grenville's new novel The Lieutenant, soldier and astronomer Daniel Rooke arrives on the First Fleet to NSW and begins his observations. 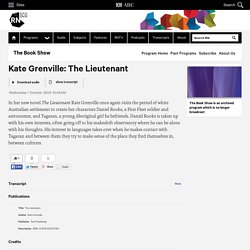 He's a loner of sorts taken up with his own interests, often going off to his makeshift observatory where he can be alone with his thoughts. His interest in languages takes over when he makes contact with a young girl named Tagaran and between them they try to make sense of the place they find themselves in, between cultures. This book follows her most successful novel The Secret River which won the 2006 Commonwealth Writers' Prize, also set in the early years of the settlement of NSW, that one on the life and times of William Thornhill who was sentenced in 1806 to be transported to NSW for the term of his natural life.

It was a look at the encounters between black and white people, a very different one to the one that's described in The Lieutenant. Kate Grenville: Thank you very much Ramona.