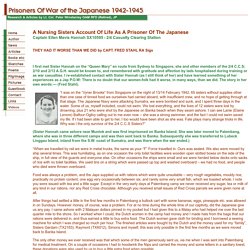 FRED STAHL RA Sigs I first met Sister Hannah on the “Queen Mary” en route from Sydney to Singapore, she and other members of the 2/4 C.C.S; 2/10 and 2/13 A.G.H. would be known to, and remembered with gratitude and affection by lads hospitalised during training or as war casualties. I re-established contact with Sister Hannah (as I still think of her) and have learned something of her experiences as a Jap P.O.W: There is no doubt that our women-folk had it worse, in many ways, than we did. The story in her own words:--- (Fred Stahl). “I was on the “Vyner Brooke” from Singapore on the night of 13/14 February 1942, 65 sisters without supplies other than one case of tinned food we ourselves had carried aboard, with insufficient crew, and no hope of getting through at that stage. The Australian Prisoner of War experience. 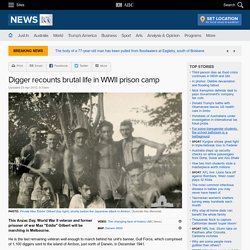 Video: The changing face of history (ABC News) This Anzac Day, World War II veteran and former prisoner of war Max "Eddie" Gilbert will be marching in Melbourne. Experiences as prisoners of the Japanese. Tom Uren ... ... speaks here of his mate, Bill Halliday, on the Thai–Burma railway, and how mateship changed them both. “ ... 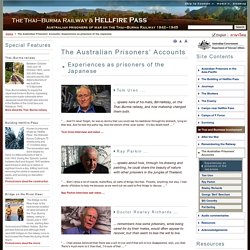 And I’ll never forget, he was so skinny that you could see his backbone through his stomach, lying on that bed. And he had this awful leg. And the stench of the ulcer wards - it’s like death itself ... ”Tom Uren interview and video ... The History of Australian Prisoners of War. Maps: Sites of capture and places of internment. Locations in South East Asia where Australians were captured Australian prisoners of the Japanese were captured at many locations across South East Asia and the South West Pacific. 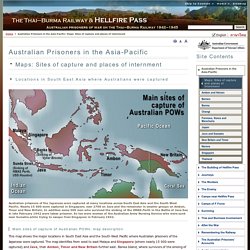 Nearly 15 000 were captured in Singapore; over 2700 on Java and the remainder in smaller groups on Ambon, Timor and New Britain. In addition some 300 men who survived the sinking of the HMAS Perth in the Battle of Java Sea in late February 1942 were taken prisoner. The Thai-Burma Railway and Hellfire Pass. Japanese military discipline was sadistic, because they administered instant or Japanese punishment. 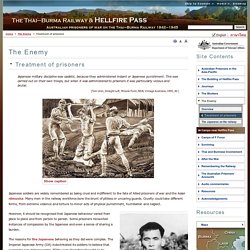 This was carried out on their own troops, but when it was administered to prisoners it was particularly vicious and brutal. [Tom Uren, Straight Left, Milsons Point, NSW, Vintage Australia, 1995, 40.] This painting by Australian POW Murray Griffin reconstructs the bashing of prisoners on the Thai–Burma railway. Here a prisoner is forced to kneel on a bamboo log, which is cutting into his legs, while two guards beat him.

He is holding a heavy metal bar above his head. Stolen Years: Australian prisoners of war.