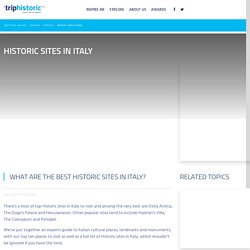 Other popular sites tend to include Hadrian’s Villa, The Colosseum and Pompeii. We’ve put together an experts guide to Italian cultural places, landmarks and monuments, with our top ten places to visit as well as a full list of Historic sites in Italy, which shouldn’t be ignored if you have the time. Best Destinations in Italy. Italy. If you get it right, travelling in the bel paese (beautiful country) is one of those rare experiences in life that cannot be overrated. 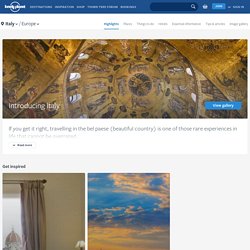 Luscious Landscapes Italy's fortes extend beyond its galleries, plates and wardrobes. The country is one of Mother Nature's darlings, its geography offering rarely rivalled natural diversity. From the north's icy Alps and glacial lakes to the south's volcanic craters and turquoise grottoes, this is a place for doing as well as seeing. One day you're tearing down Courmayeur's powdery slopes, the next you could be riding cowboy-style across the marshes of the Maremma, or diving in coral-studded Campanian waters. Bella Vita In few places do art and life intermingle so effortlessly. Why I Love Italy By Cristian Bonetto, Author Italy's 20 regions feel more like 20 independent states, each with its own dialects, traditions, architecture and glorious food.

Famous Historic Buildings & Archaeological Site in Italy Pompeii, Herculaneum, Leaning Tower of Pisa, Duomo Florence. The area which today is Venice was first settled after the fall of the Western Roman Empire in 476 and grew significantly due to the influx of refugees after the invasion of Northern Italy by the Lombards in 568. 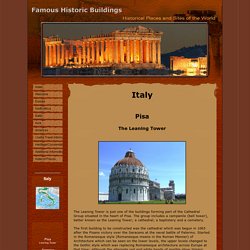 Although subject to the Byzantine Empire it gradually gained autonomy and in the 7th century the figure of a Doge was introduced to administer the area and who was to become the supreme authority of the Republic of Venice. In 1204 Venice was part of the Fourth Crusade, which seized Constantinople thus enabling them to obtain considerable plunder from the city including the Winged Lion of St. Mark, which was to become the symbol of Venice. 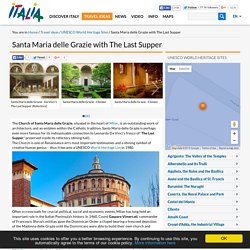 Santa Maria delle Grazie is perhaps even more famous for its indissoluable connection to Leonardo Da Vinci's fresco of “The Last Supper,” preserved inside its refectory (dining hall).The Church is one of Renaissance art's most important testimonies and a shining symbol of creative human genius - thus it became a UNESCO World Heritage List in 1980. Often a crossroads for crucial political, social and economic events, Milan has long held an important role in the Italian Peninsula’s history. In 1460, Count Gaspare Vimercati, commander of Francesco Sforza’s militias, gave the Dominican Order a chapel bearing a frescoed depiction of the Madonna delle Grazie until the Dominicans were able to build their own church and monastery. 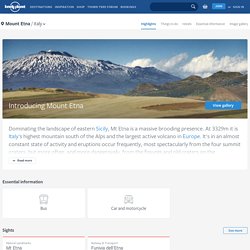 At 3329m it is Italy's highest mountain south of the Alps and the largest active volcano in Europe. It's in an almost constant state of activity and eruptions occur frequently, most spectacularly from the four summit craters, but more often, and more dangerously, from the fissures and old craters on the mountain's flanks. This activity, which is closely monitored by 120 seismic activity stations and satellites, means that it is occasionally closed to visitors. The volcano, known locally as Mongibello (derived from the Latin (mons) and Arabic (gibel) words for mountain), emerged out of volcanic activity about 35,000 years ago. Not surprisingly, the ancients viewed it with awe. The first recorded eruption took place in about 1500 BC; since then it has erupted more than 200 times. 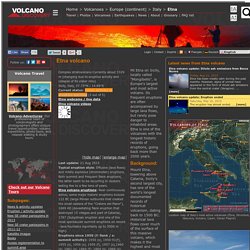 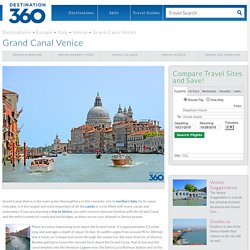 As its name indicates, it is the largest and most important of all the canals in a city filled with many canals and waterways. If you are planning a trip to Venice, you will certainly become familiar with the Grand Canal and the entire system of canals and toe bridges, as there are no cars allowed in Venice proper. Grand Canal Venice There are some interesting facts about the Grand Canal. It is approximately 2.5 miles long and averages a depth of about 16 feet. Grand Canal Hotel Venice As you are searching for Venice hotels near the Grand Canal, you will begin to realize that booking an accommodation in this city is unlike doing so in any other. You are certain to fall in love with most of the Venice hotels near the Grand Canal that you come across, so be prepared to make some difficult decisions. The Cinque Terre - Liguria. The Cinque Terre Online. The Cinque Terre.