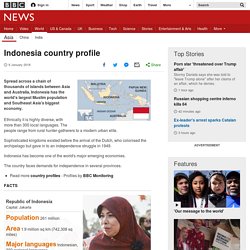 Ethnically it is highly diverse, with more than 300 local languages. The people range from rural hunter-gatherers to a modern urban elite. Sophisticated kingdoms existed before the arrival of the Dutch, who colonised the archipelago but gave in to an independence struggle in 1949. Indonesia has become one of the world's major emerging economies. The country faces demands for independence in several provinces. Read more country profiles - Profiles by BBC Monitoring Population 261 million Area 1.9 million sq km (742,308 sq miles) Major languages Indonesian, 300 regional languages Major religion Islam Life expectancy 67 years (men), 71 years (women) Currency Rupiah President: Joko Widodo Image copyright Getty Images It was a close contest with the old guard who flourished under decades of autocratic rule.

Read full profile. SEAP - Southeast Asia Progam. Please use the links to the left to navigate this web-based curriculum unit. 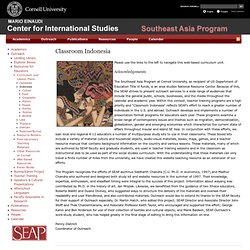 Acknowledgements The Southeast Asia Program at Cornell University, as recipient of US Department of Education Title Vl funds, is an area studies National Resource Center. Because of this, the SEAP strives to present outreach services to a wide range of audiences that include the general public, schools, businesses, and the media throughout the calendar and academic year. Within this context, teacher training programs are a high priority and "Classroom Indonesia" reflects SEAP's effort to reach a greater number of individuals in the U.S. and abroad.

Outreach develops and implements a number of presentation-format programs for educators each year. Indonesia Tourism. Indonesia. Indonesia Fashion Week. Bahasa Indonesian. Indonesian is a language spoken in Indonesia and is a working language in East Timor. 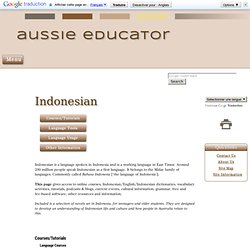 Around 250 million people speak Indonesian as a first language. It belongs to the Malay family of languages. The Jakarta Post. Indonesia - History and Culture. Indonesia Indonesia Homepage | Adventure Travel in Indonesia Asia Homepage | The World History & Culture As early as the seventh century, powerful Buddhist and Hindu empires challenged each other for supremacy in Indonesia: the Buddhist Srivijaya were centered in Sumatra, while the Hindu Mataram located their capital on Java. 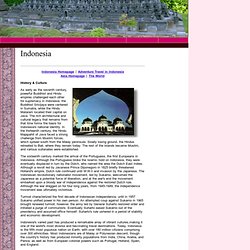 The rich architectural and cultural legacy that remains from that time forms the basis for Indonesia's national identity. Indonesia, About Indonesia. The Indonesia Republic consists of nearly of 18,110 islands within the province of South East Asia, which stands as the world's largest archipelagic state. 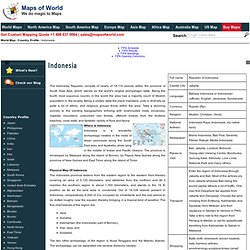 Being the fourth most populous country in the world the area has a majority count of Muslim population in the locality. Being a unitary state the place maintains unity in diversity as quite a lot of ethnic, and religious groups thrive within the area. Take a stunning journey to the exciting topographies echoing with enshrouded misty volcanoes, majestic mountains, untouched rain forests, offshore breeze from the endless beaches, coral reefs, and fantastic variety of flora and fauna. Culture of Indonesia - history, people, traditions, women, beliefs, food, customs, family, social. 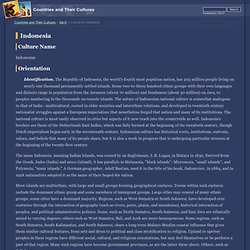 The Republic of Indonesia, the world's fourth most populous nation, has 203 million people living on nearly one thousand permanently settled islands. Some two-to-three hundred ethnic groups with their own languages and dialects range in population from the Javanese (about 70 million) and Sundanese (about 30 million) on Java, to peoples numbering in the thousands on remote islands. The nature of Indonesian national culture is somewhat analogous to that of India—multicultural, rooted in older societies and interethnic relations, and developed in twentieth century nationalist struggles against a European imperialism that nonetheless forged that nation and many of its institutions.

The national culture is most easily observed in cities but aspects of it now reach into the countryside as well. The name Indonesia, meaning Indian Islands, was coined by an Englishman, J. Most islands are multiethnic, with large and small groups forming geographical enclaves. Culture & Religion of Indonesia - Indonesian Culture - Cultural Indonesia - Religion & Culture of Indonesia. Culture of Indonesia is very unique and colorful. 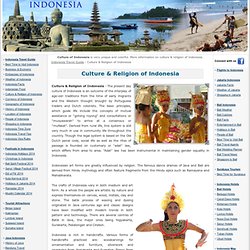 More information on culture & religion of Indonesia. Culture & Religion of Indonesia - The present day culture of Indonesia is an outcome of the interplay of age-old- traditions from the time of early migrants and the Western thought brought by Portuguese traders and Dutch colonists. The basic principles, which guide life include the concepts of mutual assistance or "gotong royong" and consultations or "musyawarah" to arrive at a consensus or "mufakat".

Derived from rural life, this system is still very much in use in community life throughout the country. Though the legal system is based on the Old Dutch penal code, social life as well as the rites of passage is founded on customary or "adat" law, which differs from area to area. Indonesian art forms are greatly influenced by religion. English to Indonesian Translation and Dictionary. Indonesian Second Language Index. Page Content Accreditation period - Units 1-4: 2005-2018 The accreditation period has been extended until 31 December 2018. 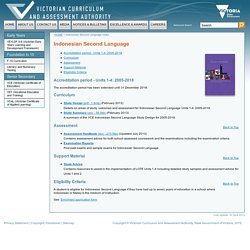