Wiki: Spokane, Portland and Seattle Railway. Defunct American Class I railroad (1908–1970) History[edit] Preserved SP&S "Northern" locomotive No. 700 in 2008 Despite legal challenges from Harriman, within a year the line had been built as far as Pasco along the Columbia River, where it connected with NP. 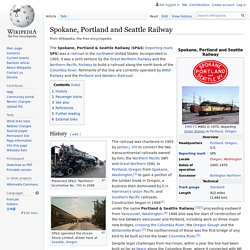 The first section to open was from Pasco west to Cliffs (near Maryhill), a length of 112 miles (180 km), on December 15, 1907.[6] Operation was extended west to Lyle, 33 miles (53 km) further west, on January 15, 1908, as construction continued on the 221-mile (356 km) section from Pasco to Vancouver.[6] In January 1908 "Spokane" was added to the railroad's name, making it the Spokane, Portland & Seattle Railway.[7][8] SP&S freight and passenger service (from Pasco) to Portland was inaugurated in November 1908.[9] By 1909 the railroad had completed construction of its line up to Spokane along the Snake River. Passenger trains[edit] Dining car of theNorth Bank Limited See also[edit] References[edit] Further reading[edit] 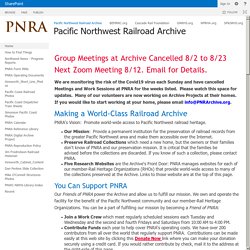 You can reach the Archive by sending an email to: info@PNRArchive.org, calling us at 206-349-6242 or by US mail. Friends of PNRA are people who support the formation of a railroad history archive in western Washington and assist PNRA in meeting the goal of becoming a world-class archive for preservation of railroad history and making that history available to everyone on the internet. We invite you to become a Friend of PNRA by submitting the information below and providing a donation to support PNRA which is recognized as a tax-exempt organization under Section 501(c)(3) of the Internal Revenue Code. 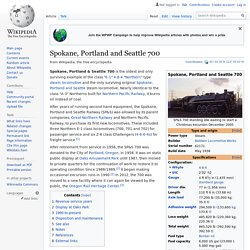 Nearly identical to the class "A-3" Northerns built for Northern Pacific Railway, it burns oil instead of coal. After retirement from service in 1956, the SP&S 700 was donated to the City of Portland, Oregon, in 1958. It was on static public display at Oaks Amusement Park until 1987, then moved to private quarters for the continuation of work to restore it to operating condition Since 1988/1989.[2] It began making occasional excursion runs in 1990.[2] In 2012, the 700 was moved to a new facility where it can again be viewed by the public, the Oregon Rail Heritage Center.[3] Revenue service years[edit]

Wikimedia: Spokane, Portland, and Seattle 700. CancelEditDeletePreviewrevert Text of the note (may include Wiki markup) Could not save your note (edit conflict or other problem). 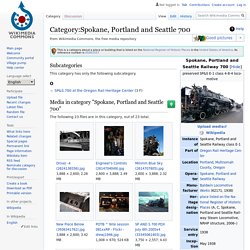 Please copy the text in the edit box below and insert it manually by editing this page. Upon submitting the note will be published multi-licensed under the terms of the CC-BY-SA-3.0 license and of the GFDL, versions 1.2, 1.3, or any later version. See our terms of use for more details. Add a noteDraw a rectangle onto the image above (press the left mouse button, then drag and release).This file has annotations. Save To modify annotations, your browser needs to have the XMLHttpRequest object. [[MediaWiki talk:Gadget-ImageAnnotator.js|Adding image note]]$1[[MediaWiki talk:Gadget-ImageAnnotator.js|Changing image note]]$1[[MediaWiki talk:Gadget-ImageAnnotator.js|Removing image note]]$1. Spokane, Portland & Seattle No. 539. Spokane, Portland & Seattle No. 539 is a class W-3 2-8-2 'Mikado' steam locomotive. 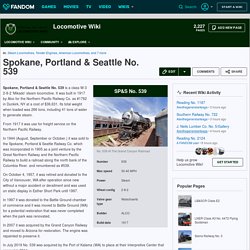 It was built in 1917 by Alco for the Northern Pacific Railway Co. as #1762 in Dunkirk, NY at a cost of $36,631. Its total weight when loaded was 266 tons, including 41 tons of water to generate steam. From 1917 it was use for freight service on the Northern Pacific Railway. In 1944 (August, September or October.) it was sold to the Spokane, Portland & Seattle Railway Co. which was incorporated in 1905 as a joint venture by the Great Northern Railway and the Northern Pacific Railway to build a railroad along the north bank of the Columbia River. and renumbered as #539. On October 4, 1957, it was retired and donated to the City of Vancouver, WA after operation since new without a major accident or derailment and was used on static display in Esther Short Park until 1997. 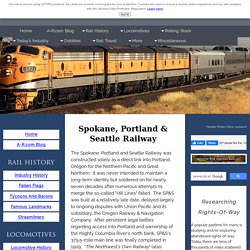 It was never intended to maintain a long-term identity but soldiered on for nearly seven decades after numerous attempts to merge the so-called "Hill Lines" failed. The SP&S was built at a relatively late date, delayed largely to ongoing disputes with Union Pacific and its subsidiary, the Oregon Railway & Navigation Company. After persistent legal battles regarding access into Portland and ownership of the mighty Columbia River's north bank, SP&S's 379.5-mile main line was finally completed in 1909. "The Northwest's Own Railway" (also known as the "North Bank Road") was the great James J. Hill's most famous project within the Pacific Northwest as he worked to establish a dominating presence to garner as much freight and passenger business as possible.