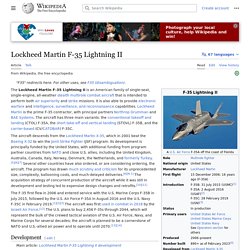 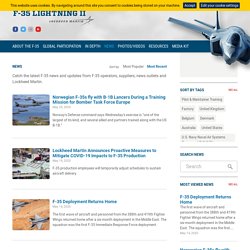 Norway’s Defense command says Wednesday’s exercise is “one of the largest of its kind, and several allied and partners trained along with the US B-1B.” F-35 production employees will temporarily adjust schedules to sustain aircraft delivery. The first wave of aircraft and personnel from the 388th and 419th Fighter Wings returned home after a six-month deployment in the Middle East.

Report: Israeli cyberattack caused Iran nuclear site fire, F35s hit missile base. Israel was responsible for two blasts at Iranian facilities — one related to uranium enrichment, the other for missile production — over the past week, a Kuwaiti newspaper reported Friday. 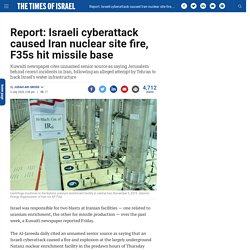 The Al-Jareeda daily cited an unnamed senior source as saying that an Israeli cyberattack caused a fire and explosion at the largely underground Natanz nuclear enrichment facility in the predawn hours of Thursday morning. According to the source, this was expected to set back Iran’s nuclear enrichment program by approximately two months. Get The Times of Israel's Daily Edition by email and never miss our top stories Free Sign Up Fighter jets from the IAF’s second F-35 squadron, the Lions of the South, fly over southern Israel (IDF spokesperson) Female Airmen deployed from Hill team up for historic combat launch > 388th Fighter Wing > Article Display. AL DHAFRA AIR BASE, United Arab Emirates -- Historically, Air Force fighter pilots and maintainers were male, but the future looks a lot different as more and more females join the ranks of these career fields and make history while they do it. 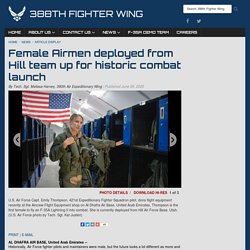 Recently, Capt. Emily "Banzai" Thompson, an F-35A Lightning II pilot, deployed from the 388th Fighter Wing at Hill Air Force Base, Utah, made history as she flew in combat, making her the first female to do so in that airframe. “This is my first deployment … so for me it was a pretty big deal, the first combat sortie for me. … Of course being the first female, it’s a pretty big honor," she said. "There’s a lot of females who have come before me and there’s a lot of females already flying combat sorties in other platforms. Thompson’s childhood dream of what she would do was very different than her chosen career path. “Standard childhood dreams were veterinarian and police officer,” she said. Italian F-35 Fighters Arrive in Iceland for Second NATO Deployment. Norwegian and Swedish fighter jets in joint training with US B-1B bombers. This is the first time that American strategic long-range bombers are exercising in Swedish airspace, Dagens Nyheter reports. 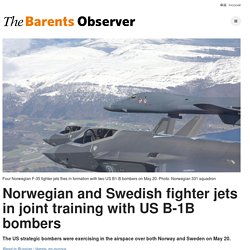 Norway’s Defense command says Wednesday’s exercise is “one of the largest of its kind, and several allied and partners trained along with the US B-1B.” The B-1B bomber is one of the three types of US strategic bombers. 388 FW pilot to lead F-35A Demonstration Team > 388th Fighter Wing > Article Display. HILL AIR FORCE BASE, Utah – Following official certification by the commander of Air Combat Command, Gen. 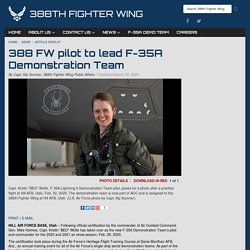 Mike Holmes, Capt. Kristin “BEO” Wolfe has taken over as the new F-35A Demonstration Team’s pilot and commander for the 2020 and 2021 air show season, Feb. 29, 2020. The certification took place during the Air Force’s Heritage Flight Training Course at Davis-Monthan AFB, Ariz., an annual training event for all of the Air Force’s single-ship aerial demonstration teams. As part of the transition of the demonstration team from a training wing to a combat wing, Capt. Wolfe was selected due to her flight experience and leadership abilities. “The Last Dojo”: We Interview Outgoing F-35 Demo Pilot, Maj. Andrew “Dojo” Olson. As if maneuvering in a dogfight, it only took an instant for Maj. 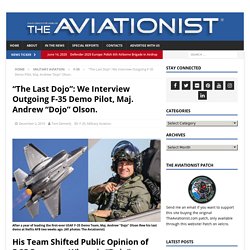 “Dojo” Olson to get behind the champagne showering shenanigans of his support crew, grab the frothing magnum from their grip, and turn the fight around. To the delight of air show fans at the team’s last 2019 performance at Nellis AFB two weeks ago, Dojo strafed his crew with celebratory bubbly in a soaking counter-attack. It was his final flight as F-35A Lightning II Demo Team Pilot. But in his last interview with TheAviationist.com last week in Nevada, Maj. Watch This Cockpit Video Of F-35 Demo Pilot Capt. Andrew “Dojo” Olson Performing Demo Routine Over Miami Beach.

After teasing it with some short clips published in the last few weeks, the F-35 Demo Team has eventually released a full cockpit video filmed with 360 degree technology as Air Force pilot Capt. 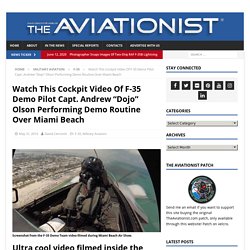 Andrew “Dojo” Olson, commander of the Team and display pilot, performed over Miami Beach, Florida, during the Miami Beach Air and Sea Show last weekend. It’s the first time a wide-angle camera sneaks into the cockpit of the 5th generation aircraft to give viewers an idea of what it looks like to fly aerobatic maneuvers with the F-35: you can clearly see Dojo using stick and throttle through the various maneuvers. 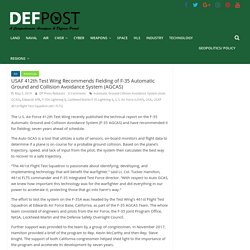 Social Media: F-35 Demo Team. Locations Flying the F-35. About: Who's Flying: Hill. Hill Air Force Base In September of 2015, the 388th Fighter Wing at Hill Air Force Base received its first two F-35A Lightning IIs, the first of 72 scheduled to be delivered to the base. 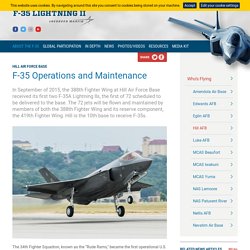 The 72 jets will be flown and maintained by members of both the 388th Fighter Wing and its reserve component, the 419th Fighter Wing. Hill is the 10th base to receive F-35s. The 34th Fighter Squadron, known as the “Rude Rams," became the first operational U.S. 34th FS | "Rude Rams" 421st FS | "Black Widows" F-35 Demo Team. About: Who's Flying: Edwards AFB.

As a result, the F-35B and F-35C variants have unique ways to take off and land. The variation between models allows military forces to achieve service-specific mission capability, while still taking advantage the economies of scale that result from the parts and processes that are common to all three variants. All three variants are supersonic, low observable stealth fighters that all have the same advanced avionics required to execute multirole missions and the support of the F-35 sustainment technologies. For the first time in U.S. F-35 A. F-35 B. F-35 C. F 35 A B C Config. Global Participation. Since the first F-35 Lightning II rolled out of the Lockheed Martin factory in Fort Worth, Texas in 2006, the program’s reach has exponentially expanded around the globe. Of the original nine partner countries – Australia, Canada, Denmark, Italy, the Netherlands, Norway, Turkey, the United Kingdom and the United States – six have received their first jets.

34th Fighter Squadron departs for second F-35A combat deployment this year. F-35 pilot reveals experience of flying from HMS Queen Elizabeth. Luke revives squadron to train Dutch, Danish F-35 pilots. Luke Air Force Base in Arizona has reactivated a squadron that dates back to World War II, to help train F-35A pilots from the air forces of the Netherlands and Denmark. The 308th Fighter Squadron was once again stood up in a ceremony Nov. 30, and will begin operations this month, the Air Force said in a release Monday. The Royal Netherlands Air Force and Royal Danish Air Force will send their F-35s to Luke over the next two years, the base said, and their pilots will train alongside U.S. Netherlands details F-35 transition plan. Fl 182.