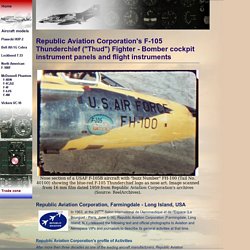 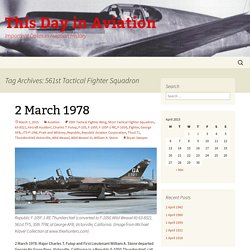 Fulop and First Lieutenant William A. Stone departed George Air Force Base, Victorville, California in a Republic F-105G Thunderchief, call sign THUD 71. Their mission was a routine instrument training flight, making instrument approaches and departures at NAS Point Mugu on the California coast, then return to George AFB. Republic F-105 Thunderchief - Fighter-Bomber / Reconnaissance / Wild Weasel. The F-105 Thunderchief was a Cold War product of the Republic Aviation Corporation and became the company's last production aircraft before its merger with Fairchild. 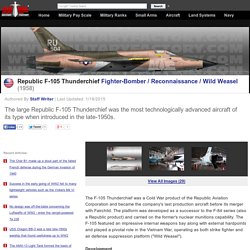 The platform was developed as a successor to the F-84 series (also a Republic product) and carried on the former's nuclear munitions capability. The F-105 featured an impressive internal weapons bay along with external hardpoints and played a pivotal role in the Vietnam War, operating as both strike fighter and air defense suppression platform ("Wild Weasel"). Joint Strike Fighter = Thunderchief II? / Back to the Future in Battlefield Interdiction. First flight of SDD JSF Prototype AA-1 in December, 2006. 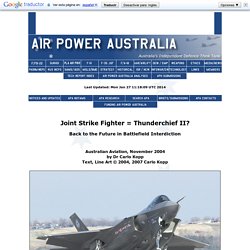 This aircraft is a 'non-representative prototype' which predates in construction a series of structural and systems weight reduction measures. The aircraft is equipped with a dummy EOTS fairing under the nose (Imagery via Air Force Link). The new Joint Strike Fighter (JSF) program is often compared to the early nineteen sixties Tactical Fighter eXperimental (TFX/F-111) program, reflecting the multi-service structure of both programs. In concept and sizing, however, the JSF is very much closer to another early nineteen sixties tactical fighter, the Republic AP-63 series F-105 Thunderchief. Rolling Thunder escalated US involvement in Vietnam's civil war, pulled ground troops into combat - Vietnam at 50.

In 1964, Keith Connolly was a young Air Force pilot and was among the first Americans to fly sorties in the F-100 Super Sabre fighter bomber targeting the North Vietnamese communist insurgency. 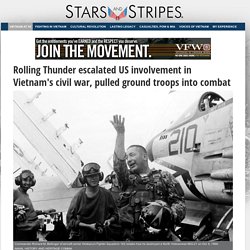 “The atmosphere was that we were going over there to provide the firepower necessary to bring the North Vietnamese to their knees,” said Connolly, who now lives in Arizona after retiring from 35 years in the Air Force. The average American back then paid scant attention to the long-simmering civil war on the Indochina peninsula, where the U.S. had sent military advisors but was not yet involved in direct ground combat. “It was the only war in town, and it was going to be over with tomorrow,” Connelly recalled. “Boy, were we wrong.” On March 2, 1965, the U.S. commenced such bombing raids in earnest with Operation Rolling Thunder, a massive, joint Navy-Air Force campaign of more than 300,000 attack sorties over 3½ years. “It was just a mess, from start to finish,” said James H. No magic formula Col. The Republic F-105 Thunderchief. v1.0.2 / 01 jan 03 / greg goebel / public domain * The Republic "F-105 Thunderchief" was conceived in the 1950s as a nuclear strike aircraft, but would achieve fame in the Vietnam War as the "Thud", a conventional strike and "defense suppression" aircraft. 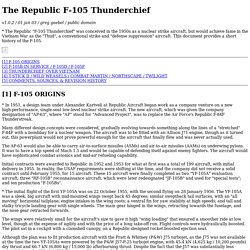 This document provides a short history of the F-105. * In 1951, a design team under Alexander Kartveli at Republic Aircraft began work as a company venture on a new high-performance, single-seat low-level nuclear strike aircraft. The new aircraft, which was given the company designation of "AP-63", where "AP" stood for "Advanced Project", was to replace the Air Force's Republic F-84F Thunderstreak. Many different design concepts were considered, gradually evolving towards something along the lines of a "stretched" F-84F with a bombbay for a nuclear weapon. REPUBLIC F-105. Republic F-105D Thunderchief. In 1951 Republic Aviation began a project to develop a supersonic tactical fighter-bomber to replace the F-84F. 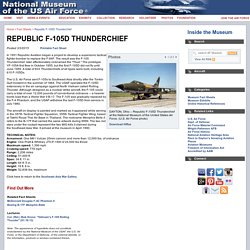 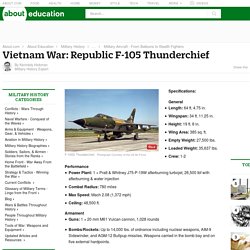 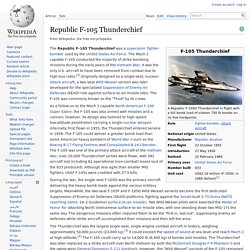 The Mach 2 capable F-105 conducted the majority of strike bombing missions during the early years of the Vietnam War; it was the only U.S. aircraft to have been removed from combat due to high loss rates.[2] Originally designed as a single-seat, nuclear-attack aircraft, a two-seat Wild Weasel version was later developed for the specialized Suppression of Enemy Air Defenses (SEAD) role against surface-to-air missile sites. The F-105 was commonly known as the "Thud" by its crews. As a follow-on to the Mach 1 capable North American F-100 Super Sabre, the F-105 was also armed with missiles and a cannon; however, its design was tailored to high-speed low-altitude penetration carrying a single nuclear weapon internally. 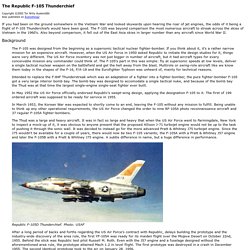