Brendan holds a Superb rating on Avvo, an attorney rating website the magazine uses to determine the best lawyers in the Spokane and Coeur d’Alene region. Go to our website and find more . Best Domestic Violence lawyer. Despite what most people believe, domestic violence (DV) is not actually a criminal charge. 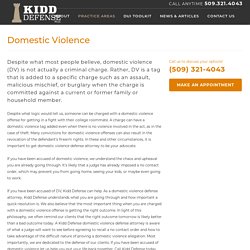 Rather, DV is a tag that is added to a specific charge such as an assault, malicious mischief, or burglary when the charge is committed against a current or former family or household member. Despite what logic would tell us, someone can be charged with a domestic violence offense for getting in a fight with their college roommate. A charge can have a domestic violence tag added even when there is no violence involved in the act, as in the case of theft. Many convictions for domestic violence offenses can also result in the revocation of the defendant’s firearm rights. In these and other circumstances, it is important to get domestic violence defense attorney to be your advocate. If you have been accused of domestic violence, we understand the chaos and upheaval you are already going through. 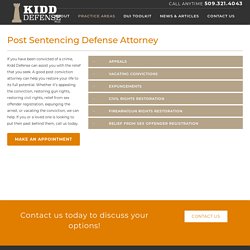 A RALJ appeal is an appeal from a district or municipal court that is named after the set of rules that govern such appeals. If the conviction under consideration occurred in Superior Court, a defendant’s next move would be to file a Rules of Appellate Procedure (RAP) appeal to the Washington State Court of Appeals in the division where the conviction occurred. Best DUI Attorney Spokane - Kidd Defense. Spokane Violent Crime Lawyers - Kidd Defense. An assault is any intentional physical contact or threat of physical contact that is occurs with unlawful force. 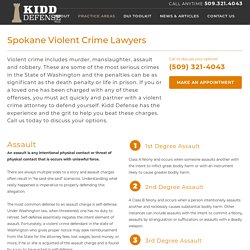 There are always multiple sides to a story and assault charges often result in “he said–she said” scenarios. Understanding what really happened is imperative to properly defending this allegation. The most common defense to an assault charge is self-defense. Under Washington law, when threatened, one has no duty to retreat. Self-defense essentially negates the intent element of assault. Best Spokane DUI Lawyer - Kidd Defense. DUI Toolkit - Kidd Defense.

Drug Crimes Attorney - Kidd Defense. If the charge happens to be a felony, the defendant will likely be held in jail until the time of their First Appearance, which typically occurs the first business day following the arrest. 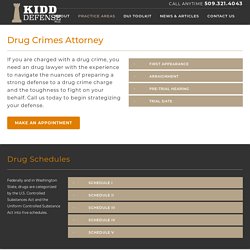 In this phase of the case, the allegations are read to the Court. The Court then makes a determination whether or not probable cause exists for the charge presented. The Court will then set release conditions, which may include posting a bond or bail and submitting to random drug testing. The Court will then schedule an arraignment hearing where the defendant will be asked to enter a plea, which will almost always be Not Guilty to allow for additional investigation and preparation of the case. Be sure to consult with a drug lawyer to determine your best path forward.

On the day of the pre-trial hearing, the prosecution, defense counsel and the defendant meet with the judge to determine if the case is ready for trial or resolution, or it may be continued to a later date. DUI Toolkit - Kidd Defense.  Misdemeanor & Felony Citation Defense. Sleep-deprived driving can be as dangerous as DUI. Posted at 23:04h in General News by Crystal Kidd Few realize that driving while sleep-deprived can be just as hazardous as driving while intoxicated by alcohol or drugs. 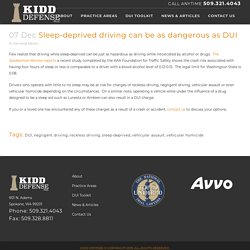 The Spokesman-Review reports a recent study completed by the AAA Foundation for Traffic Safety shows the crash risk associated with having four hours of sleep or less is comparable to a driver with a blood alcohol level of 0.12-0.15. The legal limit for Washington State is 0.08. Drivers who operate with little to no sleep may be at risk for charges of reckless driving, negligent driving, vehicular assault or even vehicular homicide depending on the circumstances. Find Expert Spokane DUI Attorney with Kidd Defense - DWI Lawyer. Washington State has some of the toughest drunk driving laws in the country and local prosecutors have declared a war on drunk drivers. 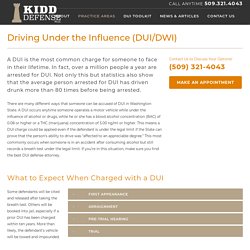 Consequently, it is important to find DUI defense attorney to be your advocate. A DUI is usually considered a gross misdemeanor, which means that the maximum sentence one could receive is 364 days in jail and a $5,000 fine. However, if the defendant has history of a prior Vehicular Homicide or Vehicular Assault based upon a DUI or if this is the defendant’s fifth DUI in 10 years, they will be facing a class B Felony which can result in up to 10 years in prison and a $20,000 fine. Even a conviction for the most trivial DUI may include mandatory incarceration, fines, license suspension, Ignition Interlock Device (IID), alcohol and drug treatment, and probation. 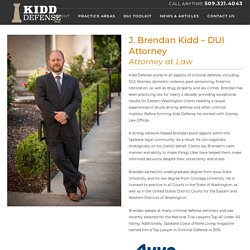 Brendan has been practicing law for nearly a decade, providing exceptional results for Eastern Washington clients needing a lawyer experienced in drunk driving defense and other criminal matters. Before forming Kidd Defense, he worked with Cooney Law Offices. A strong network helped Brendan build rapport within the Spokane legal community. As a result, he can negotiate strategically on his clients’ behalf. Clients say Brendan’s calm manner and ability to make things clear have helped them make informed decisions despite their uncertainty and stress.