NCP extends support to Sena with conditions of breaking alliance. After BJP’s refusal, Shiv Sena in Maharashtra prepares to form the government with Congress-NCPGovernor gave time till 7.30 pm to inform Shiv Sena about the strengthUddhav Thackeray may become Chief Minister, NCP possible as Deputy Chief Minister and Congress as SpeakerNCP said- If Shiv Sena breaks ties with NDA, we will consider supporting itShiv Sena (56), NCP (54) and Congress (44) have 154 MLAs, while the majority figure is 145. 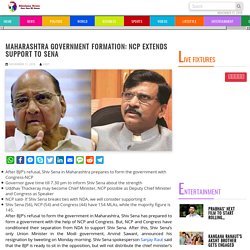 English League: Liverpool defeats Manchester City at Anfield. For what has become the biggest rivalry in English Football ended in utter dissatisfaction for Manchester City. 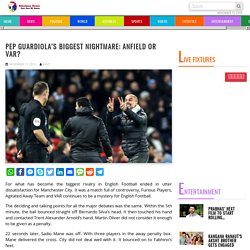 It was a match full of controversy, Furious Players, Agitated Away Team and VAR continues to be a mystery for English Football. The deciding and talking points for all the major debates was the same. Within the 5th minute, the ball bounced straight off Bernardo Silva’s head. It then touched his hand and contacted Trent Alexander Arnold’s hand. Martin Oliver did not consider it enough to be given as a penalty. 22 seconds later, Sadio Mane was off. Pic.twitter.com/xS6Vd0owBe— Liverpool FC (@LFC) November 10, 2019 Ever since Fabinho has joined this side, he takes these out of the box attempts. In celebration, he looked at his watch and showed that it was his time to be on the score sheet. Before City could bounce back into the game, Liverpool did what they well.

Robertson did justice and delivered a beautiful cross ahead of Mohamed Salah. Political Parties are tampering with online Freedom in India. Pakistan among the 10 worst countries in internet freedom, India got 55 out of 100 Internet freedom is decreasing worldwide and India is second to none. 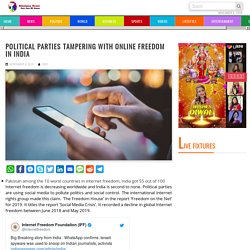 Political parties are using social media to pollute politics and social control. The international internet rights group made this claim. Everything you need to know about the Kartarpur Corridor. After many years of waiting, the visa-free journey will now begin for the Sikh pilgrimage Kartarpur Sahib. 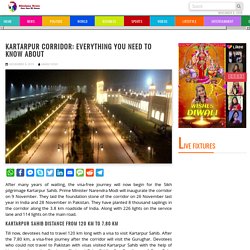 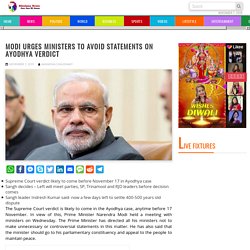 In view of this, Prime Minister Narendra Modi held a meeting with ministers on Wednesday. The Prime Minister has directed all his ministers not to make unnecessary or controversial statements in this matter. He has also said that the minister should go to his parliamentary constituency and appeal to the people to maintain peace. Amitabh Bachchan completes 50 years in Bollywood. On November 7, ie 50 years before today, in 1969, on November 7, the cinematographers of India saw the first glimpse of a slim actor on the silver screen. 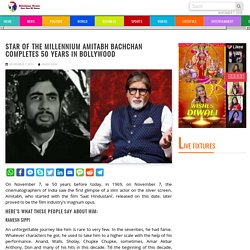 Amitabh, who started with the film ‘Saat Hindustani’, released on this date, later proved to be the film industry’s magnum opus. Here’s what these people say about him: Ramesh Sippi An unforgettable journey like him is rare to very few. Shiv Sena leader Raut meets NCP's Sharad Pawar. The situation regarding the formation of the government is not clear even 13 days after the results of the Maharashtra assembly elections. 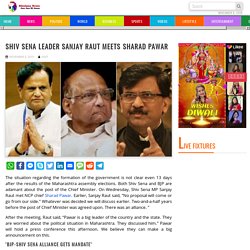 Both Shiv Sena and BJP are adamant about the post of the Chief Minister. On Wednesday, Shiv Sena MP Sanjay Raut met NCP chief Sharad Pawar. High Court dismisses review petition in Police vs Lawyer. The Delhi High Court on Wednesday slammed the Delhi Police for not changing its stand on action against lawyers. 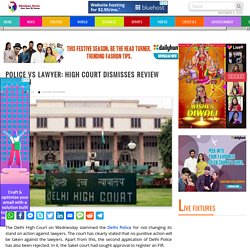 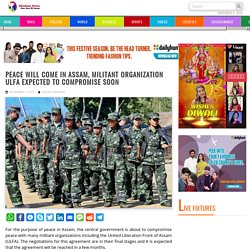 The negotiations for this agreement are in their final stages and it is expected that the agreement will be reached in a few months. ULFA militant organization expected to compromise soon AB Mathur, former Special Secretary, Research and Analysis Wing (RAW), is a negotiator in the case. Interesting facts about this Bollywood Diva: Happy Birthday Tabbu. 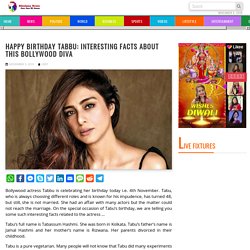 Tabu, who is always choosing different roles and is known for his impudence, has turned 48, but still, she is not married. She had an affair with many actors but the matter could not reach the marriage. On the special occasion of Tabu’s birthday, we are telling you some such interesting facts related to the actress … Liverpool defeats GenK, controversial 'Origi' racist banner.

Liverpool has condemned a racist banner during their game against Genk. It depicted striker Divock Origi. Latest Updates Harayana and Maharashtra Election Results. In the results of the Maharashtra assembly elections, the BJP-Shiv Sena alliance is leading in 160 seats out of 288. They have crossed the alliance figure (145 seats). However, this time the BJP is losing over 20 seats.

Dada ready for Second Innings: BCCI President Sourav Ganguly. The BCCI autonomously got the new chairman on Wednesday after a full 33 months. For the first time in the form of former Indian captain Saurabh Ganguly, the management of Indian cricket has come in the hands of a player. The special thing is that Ganguly got the captaincy of an Indian team in 2000 when cricket was embarrassed because of fixing stains. However, Ganguly faced challenges and put up a strong team of talented young players and brought great success to the country. Barcelona eyes for a sixth consecutive win in UEFA Champions League. When Spanish club Barcelona square off against Slavia Prague on Wednesday in Group-F of the UEFA Champions League, they will look to record their sixth consecutive win. This will be the first time the Barcelona team will play in Prague. Barcelona’s team scored a fifth successive victory by scoring goals by Leon Messi, Luis Suarez, and Antoine Griezmann to beat Eber 3–0 in La Liga.

However, he will remain in jail till October 24 in a case filed by the Enforcement Directorate (ED). Chidambaram filed a bail petition in the Supreme Court on 15 October. The CBI then filed a charge sheet against Chidambaram in the INX Media case. Justice R. 3 Test: India defeats South Africa by innings and 202 runs. India defeated South Africa by an innings and 202 runs in the last match of the three-Test series played in Ranchi. With this win, Team India won the series 3–0. India won all the matches of a Test series against South Africa for the first time.

Bollywood Stars and Sports Celebrities come for Voting. Six Factors that determine Maharashtra Election Results. Rahul Gandhi calls 'bechendra',accusses Modi of selling PSUs, Congress leader Rahul Gandhi tweeted- This time of uncertainty and fear for millions of employees of government undertakings‘I stand shoulder to shoulder with all those workers in protest of the loot’The Congress accused the Central Government that it wanted to sell BPCL ‘secretly’ and without passing a resolution to Parliament Congress leader Rahul Gandhi once again targeted Prime Minister Narendra Modi over the economy.

By tweeting Rahul, they described the Prime Minister as Bechendra (seller) Modi. Donald Trump defends the withdrawal of Troop from Syria. Following the withdrawal of US troops from north-eastern Syria, military action by Turkey has created a humanitarian crisis. They have forced thousands of people to flee after Turkish airstrikes targeting pro-American Kurdish forces in Syria. While the international world condemned Turkey’s actions, the US justified the sudden withdrawal of its troops from North-East Syria, which the Kurdish forces see as a betrayal.

Muslims says that they are accused in the Ayodhya dispute case. During the hearing of the Ramjanma Bhoomi-Babri Masjid land dispute in the Supreme Court, Muslim parties alleged that the Constitution Bench is not questioning the Hindu side in this matter, but only with them. The allegation made by Rajiv Dhawan, a lawyer for the Muslim parties when the 38th-day hearing began in front of a five-member constitution bench headed by Chief Justice Ranjan Gogoi. Other members of the Constitution Bench include Justice SA Bobde, Justice Dhananjay Y Chandrachud, Justice Ashok Bhushan and Justice S Abdul Nazir. FIFA World Cup qualifier: India and Bangladesh play a draw. FIFA World Cup qualifier: India and Bangladesh play a draw. Shoaib Akhtar says BCCI is in good hands of Sourav Ganguly. Shoaib Akhtar welcomed Sourav Ganguly as the new BCCI President. Veer savarkar will get bharat ratna promised bjp in Maharashtra election. BJP has promised Bharat Ratna to freedom fighter Vinayak Damodar SavarkarIn the manifesto, they have also promised Bhimrao Ambedkar and Savitribai Phule Bharat Ratna.BJP has emphasized on health and education.

Also tried to practice all classesOver 12 hours day electricity to farmers, promise to provide one crore jobs for youth. Irctc got bumper listing in stock market shares prices gone high. Bumper listing of IRCTC shares in the stock marketShares with an issue price of Rs 320 with a premium of over 100% listed at Rs 644The company’s aim was to raise Rs 645 crore through an IPO.IRCTC shares got 112 times higher bids A bumper listing of the shares of Indian Railway Catering and Tourism Corporation (IRCTC) has been done in the stock market. Saurav ganguly going to be new chairman of BCCI.

Siddharth Malhotra Doing High Altitude Training for Sher Shah. Pakistan to Give Consular access to Kulbhushan Jadhav. Prabhas Will Rule the World: Saaho Wins Audience Heart. Liverpool shines in UEFA Awards, Van Dijk wins Player of the year. Check out the Look of Janhvi in 'Gunjan Saxena The Kargil Girl' ICC Gets Trolled For Comparing Stokes With Sachin Tendulkar. Pakistan Uses Manohar Lal Khattar's Statement as Evidence in UN. PV Sindhu Wins World Badminton Championship. Pakistan on Blacklist of FATF For Not Meeting Standards. No Third-Party Should Interfere: Macron in Kashmir Matter. Sonam Kapoor Unveils the look of The Zoya Factor. Chandrasekhar detained on Protest against demolition of temple. US President Offers to Mediate Over Kashmir Issue for the 3rd Time. Rajesh Aggarwal resigns just before Cabinet Expansion in UP. PM Modi Pays Tribute to Rajiv Gandhi on his Birth Anniversary - khulasa news.