khomotso Queen Paledi is student at university of Johannesburg.,majoring in mathematics and life sciences.interested in learning new ways of incorporating ICT in teaching to make learning more interesting.

We Are the Creators of Hate - Is It Too Late to Undo Who We Have Become? My kids are aged three and five . 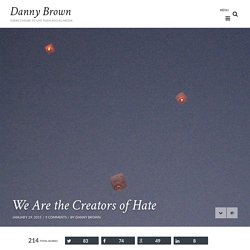 My daughter, Salem, is three and my son, Ewan, will be five in May. Both of them go to school. Salem goes to a “pretend” school, meaning she goes to private daycare, and our daycare lady takes Salem to a little school each morning where other kids her age play and learn. It’s almost like junior junior kindergarten. Ewan goes to full-day junior kindergarten (he started last summer) and has had a blast making new friends, learning new things, discovering who he is, and generally being a kid on a new adventure (much like his sister). The friends and teachers that both Salem and Ewan are surrounded by are from every race, religion, and colour on our beautiful planet today – and yet neither Ewan nor Salem know this.

To them, they’re simply friends and teachers. Evolution: 24 myths and misconceptions. If you think you understand it, you don’t know nearly enough about it It will soon be 200 years since the birth of Charles Darwin and 150 years since the publication of On the Origin of Species, arguably the most important book ever written. 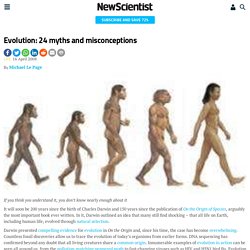 In it, Darwin outlined an idea that many still find shocking – that all life on Earth, including human life, evolved through natural selection. Darwin presented compelling evidence for evolution in On the Origin and, since his time, the case has become overwhelming. Countless fossil discoveries allow us to trace the evolution of today’s organisms from earlier forms. DNA sequencing has confirmed beyond any doubt that all living creatures share a common origin. And yet despite an ever-growing mountain of evidence, most people around the world are not taught the truth about evolution, if they are taught about it at all. 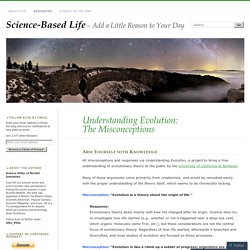 Many of these arguments come primarily from creationists, and would be remedied easily with the proper understanding of the theory itself, which seems to be chronically lacking. Misconception: “Evolution is a theory about the origin of life.” Response: Evolutionary theory deals mainly with how life changed after its origin. Science does try to investigate how life started (e.g., whether or not it happened near a deep-sea vent, which organic molecules came first, etc.), but these considerations are not the central focus of evolutionary theory. Misconception: “Evolution is like a climb up a ladder of progress; organisms are always getting better.” Other taxa may have changed and diversified a great deal — but that doesn’t mean they got “better.” Response: Evolution is science. Carolina.com. By Crystal Jeter Product Developer Students may bring a variety of misconceptions with them when they enter a study of genetics. 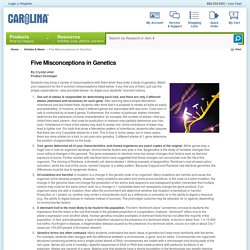 Watch your classroom for the 5 common misconceptions listed below. If you find any of them, just use the simple explanations—also provided below—to dispel your students’ incorrect notions. One set of alleles is responsible for determining each trait, and there are only 2 different alleles (dominant and recessive) for each gene.

After learning about simple Mendelian inheritance and sex-linked traits, students often think that it is possible to model all traits so easily and predictably. Commonlifesciencemisconceptions - cyberscienceschool. Standard: S7L1 Description: S7L1 Students will investigate the diversity of living organisms and how they can be compared scientifically. 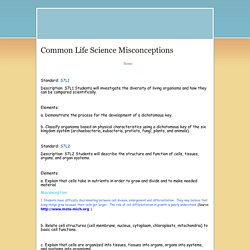 Elements: a. Demonstrate the process for the development of a dichotomous key. b. HANDLING PUPILS' MISCONCEPTIONS. Alwyn Olivier, Department of Didactics, University of Stellenbosch, Stellenbosch 7600 Presidential address delivered at the Thirteenth National Convention on Mathematics, Physical Science and Biology Education, Pretoria, 3 - 7 July 1989. 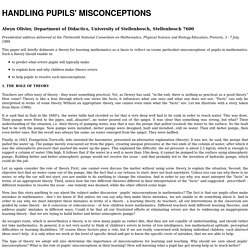 This paper will briefly delineate a theory for learning mathematics as a basis to reflect on (some particular) misconceptions of pupils in mathematics. Such a theory should enable us to predict what errors pupils will typically maketo explain how and why children make (these) errorsto help pupils to resolve such misconceptions. Teachers are often wary of theory - they want something practical. It is said that in Italy in the 1640's, the water table had receded so far that a very deep well had to be sunk in order to reach water.

Finally, in 1643, Evangelista Torricelli, who invented the barometer, presented an alternative explanation (theory): It was not, he said, the pumps that pulled the water up. Let us again consider the role of theory. 2.1 Behaviourism. My ORC Collection > View a Folder. Common Misconceptions about Biomes and Ecosystems — Tundra: Life in the Polar Extremes. Plants Students may have many other misconceptions about plants. 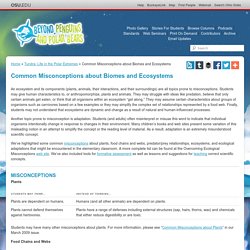 For more information, please see “Common Misconceptions about Plants” in our March 2009 issue. Food Chains and Webs Predator/Prey Populations and Relationships Ecosystems Ecological Adaptations What do your students think? One useful set of resources is a collection of formative assessment probes from NSTA Press. Related formative assessment probes in Volume 2 of Uncovering Student Ideas in Science: “Habitat Change” asks students to predict what will happen to an animal population if its habitat changes. Poverty damns SA's children to ignorance Education Education M&G.