Exercise 2. Since you are a pretty smart data person, you realize another interesting business question would be: are the most viewed products also the most sold? 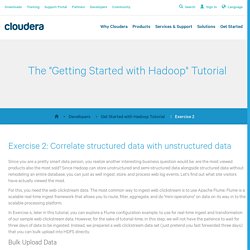 Since Hadoop can store unstructured and semi-structured data alongside structured data without remodeling an entire database, you can just as well ingest, store, and process web log events. Let's find out what site visitors have actually viewed the most. For this, you need the web clickstream data. The most common way to ingest web clickstream is to use Apache Flume. Flume is a scalable real-time ingest framework that allows you to route, filter, aggregate, and do "mini-operations" on data on its way in to the scalable processing platform. In Exercise 4, later in this tutorial, you can explore a Flume configuration example, to use for real-time ingest and transformation of our sample web clickstream data.

Bulk Upload Data For your convenience, we have pre-loaded some sample access log data into /opt/examples/log_data/access.log.2. Authorization and Authentication In Hadoop. One of the more confusing topics in Hadoop is how authorization and authentication work in the system. 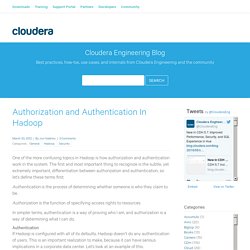 Authentication If Hadoop is configured with all of its defaults, Hadoop doesn’t do any authentication of users. Let’s say Joe User has access to a Hadoop cluster. Ports Used by Cloudera Manager and Cloudera Navigator. Introducing Hue. Ssl handshake. How to configure static DNS on CentOS or Fedora - Ask Xmodulo. Question: On CentOS, I am getting an IP address assigned by DHCP. 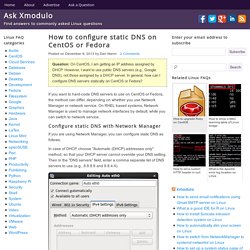 However, I want to use public DNS servers (e.g., Google DNS), not those assigned by a DHCP server. In general, how can I configure DNS servers statically on CentOS or Fedora? If you want to hard-code DNS servers to use on CentOS or Fedora, the method can differ, depending on whether you use Network Manager or network service. On RHEL based systems, Network Manager is used to manage network interfaces by default, while you can switch to network service.

Configure static DNS with Network Manager If you are using Network Manager, you can configure static DNS as follows. In case of DHCP, choose "Automatic (DHCP) addresses only" method, so that your DHCP server cannot override your DNS setting. If you use a static IP address, simply enter your DNS servers in the "DNS servers" field. Configure static DNS in /etc/sysconfig/network-scripts/ifcfg-ethX Method One Use "PEERDNS=no". How Volume Shadow Copy Service Works: Data Recovery. This section outlines the requestors, writers, and providers that are necessary for creating consistent shadow copies. 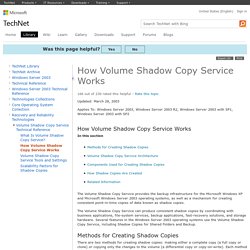 The Volume Shadow Copy Service provides coordination among these components. The Volume Shadow Copy Service is invoked by the requestor, which is typically a backup application that creates shadow copy volumes to back up data while the source volume continues to operate in production. Requestors can also be management applications that manage shadow copy creation and usage, or fast recovery solutions which are specific products that reduce service level agreement (SLA) times for specific applications. The requestor also communicates with the writers to gather information about what should be backed up and how it should be backed up. Writers are software that is included in applications and services that help provide consistent shadow copies. A writer is associated with one or more components.

Mastering Linux TOP Command. Understanding the Load Average on Linux and Other Unix-like Systems. Linux, Mac, and other Unix-like systems display “load average” numbers. These numbers tell you how busy your system’s CPU, disk, and other resources are. They’re not self-explanatory at first, but it’s easy to become familiar with them. Whether you’re using a Linux desktop or server, a Linux-based router firmware, a NAS system based on Linux or BSD, or even Mac OS X, you’ve probably seen a “load average” measurement somewhere.

Load vs. Load Average On Unix-like systems, including Linux, the system load is a measurement of the computational work the system is performing. Unix systems traditionally just counted processes waiting for the CPU, but Linux also counts processes waiting for other resources — for example, processes waiting to read from or write to the disk. On its own, the load number doesn’t mean too much. That’s why Unix-like systems don’t display the current load. Finding the Load Average. RedHat/Ubuntu/Mint: Performance Monitoring Commands. MCITP 70-640: Active Directory different group types available. MCITP 70-640: Active Directory different group types available.

Linux Interview Question: What is ldap / How LDAP works.