PicPac Stop Motion & TimeLapse. 10 Ways Kids Too Young to Vote Can Impact the Election - YEA Camp. One of the biggest stories of this election season is how politically engaged young people are all across the country. 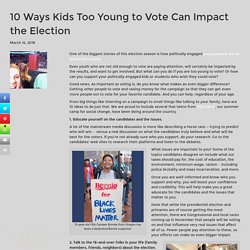 Even youth who are not old enough to vote are paying attention, will certainly be impacted by the results, and want to get involved. But what can you do if you are too young to vote? Or how can you support your politically engaged kids or students who wish they could vote? Good news. As important as voting is, do you know what makes an even bigger difference? From big things like interning on a campaign to small things like talking to your family, here are 10 ideas to do just that. 1. A lot of the mainstream media discussion is more like describing a horse race — trying to predict who will win — versus a real discussion on what the candidates truly believe and what will be best for the voters. 15-year-old YEA Camper Brooke from Oregon has been a dedicated Bernie supporter What issues are important to you?

2. Tell them why you support the candidate you do. 3. 4. 5. 6. Innovation on Earth. Ted Cruz, Republican Last night in Iowa, Americans voted in the first U.S. primary for the 2016 presidential election. 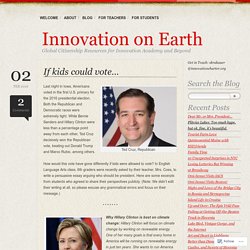 Having a great idea, and assembling a team to bring that concept to life is the first step in creating a successful business venture. 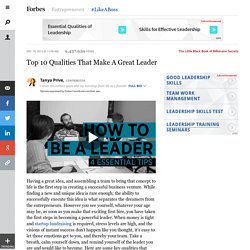 While finding a new and unique idea is rare enough; the ability to successfully execute this idea is what separates the dreamers from the entrepreneurs. However you see yourself, whatever your age may be, as soon as you make that exciting first hire, you have taken the first steps in becoming a powerful leader. When money is tight and startup fundraising is required, stress levels are high, and the visions of instant success don’t happen like you thought, it’s easy to let those emotions get to you, and thereby your team. Take a breath, calm yourself down, and remind yourself of the leader you are and would like to become. Here are some key qualities that every good leader should possess, and learn to emphasize. Honesty. Txe-issues. No Bees, No Food Millions of bees are dying off, with alarming consequences for our environment and our food supply. 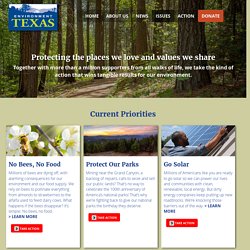 We rely on bees to pollinate everything from almonds to strawberries to the alfalfa used to feed dairy cows. What happens if the bees disappear? It’s simple: No bees, no food. > LEARN MORE Protect Our Parks Mining near the Grand Canyon, a backlog of repairs, calls to seize and sell our public lands? Go Solar Millions of Americans like you are ready to go solar so we can power our lives and communities with clean, renewable, local energy. Global Warming Solutions President Obama has a plan that’s been called “the strongest action ever taken by an American president” to tackle global warming.

America's Next Top Polluter Who is America’s next top polluter? 100% Renewable Energy Imagine our country producing and consuming energy while we enjoy healthy, livable communities. What is Food Insecurity? Familiar, but hard to measure Hunger is a familiar physical sensation, but can be hard to measure in a large population. 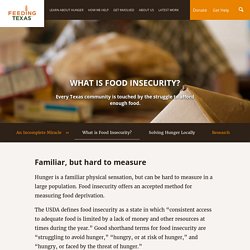 Food insecurity offers an accepted method for measuring food deprivation. The USDA defines food insecurity as a state in which “consistent access to adequate food is limited by a lack of money and other resources at times during the year.”