TubeChop - Chop YouTube Videos. Internet Hunt Activities about Computers. Can You Start Sentences with “And” or “But”? By Daniel Scocco In the past, English teachers used to preach that one should never start a sentence with conjunctions like and or but. 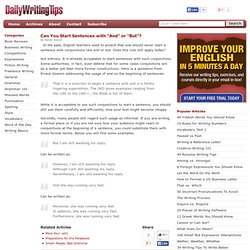 Does this rule still apply today? Not entirely. It is already acceptable to start sentences with such conjunctions. Some authorities, in fact, even defend that for some cases conjunctions will do a better job than more formal constructions. That it is a solecism to begin a sentence with and is a faintly lingering superstition. While it is acceptable to use such conjunctions to start a sentence, you should still use them carefully and efficiently, else your text might become choppy. Secondly, many people still regard such usage as informal. But I am still awaiting his reply. Can be written as: Literature And Writing Word Search Puzzles. Literature And Writing Word Search Puzzles. "Adventures of Huckleberry Finn" by Mark Twain. WELL, pretty soon the old man was up and around again, and then he went for Judge Thatcher in the courts to make him give up that money, and he went for me, too, for not stopping school. 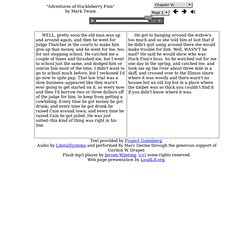 He catched me a couple of times and thrashed me, but I went to school just the same, and dodged him or outrun him most of the time. I didn't want to go to school much before, but I reckoned I'd go now to spite pap. That law trial was a slow business--appeared like they warn't ever going to get started on it; so every now and then I'd borrow two or three dollars off of the judge for him, to keep from getting a cowhiding. Every time he got money he got drunk; and every time he got drunk he raised Cain around town; and every time he raised Cain he got jailed. He was just suited--this kind of thing was right in his line. He got to hanging around the widow's too much and so she told him at last that if he didn't quit using around there she would make trouble for him. Donald Barthelme (1931-1989)

Contributing Editors: Linda Wagner-Martin and Charles Molesworth Classroom Issues and Strategies The brevity and irony of Barthelme's work are sometimes surprising to students. 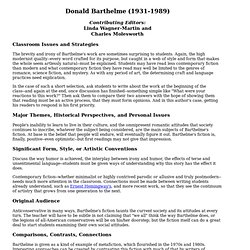 Again, the high modernist quality--every word crafted for its purpose, but caught in a web of style and form that makes the whole seem artlessly natural--must be explained. Students may have read less contemporary fiction than modern and what contemporary fiction they have read may well be limited to the genres of romance, science fiction, and mystery. As with any period of art, the determining craft and language practices need explication.

In the case of such a short selection, ask students to write about the work at the beginning of the class--and again at the end, once discussion has finished--something simple like "What were your reactions to this work? " Scriptorium - Donald Barthelme. Graham Cracker Sandwich Cookies Recipe. How to Make Plastic Bag Ice Cream. Make Ice Cream in a Plastic Bag. Yes, it sounds dangerous and the potential for messes seems highly likely, but you’ll be surprised at the good, “clean” fun you’ll enjoy with your students when you make ice cream. 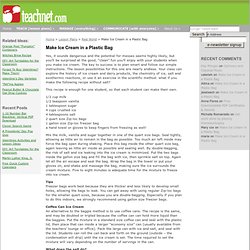 The key to success is to plan smart and follow our simple instructions. The lesson possibilities for this one are nearly endless. Your class can explore the history of ice cream and dairy products, the chemistry of ice, salt and exothermic reactions, or use it an exercise in the scientific method: what if you make the following recipe without salt? This recipe is enough for one student, so that each student can make their own. 1/2 cup milk 1/2 teaspoon vanilla 1 tablespoon sugar 4 cups crushed ice 4 tablespoons salt 2 quart size Zip-loc bags 1 gallon size Zip-loc freezer bag a hand towel or gloves to keep fingers from freezing as well! Mix the milk, vanilla and sugar together in one of the quart size bags.

Coffee Can Ice Cream An alternative to the baggie method is to use coffee cans. What does the salt do? The Career Jeopardy Games. Top 15 Trendy Toy Crazes. Tamagotchi Your kid wants a dog, but you don't, so get him the next best thing -- a virtual pet! 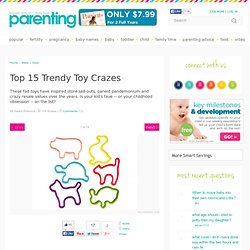 The egg-shaped handheld, which had its heyday in the mid-90s according to Wikipedia, lets you name your pet, feed it, clean up its poop, give it medicine, and get it to bed. Fail to take proper care of it, and it dies -- just like the real thing, only a lot less traumatic. In early versions, half a day of neglect could lead to the pet's demise, but after complaints from teachers and parents who wanted their child to engage in other real world activities, the company introduced a pause feature. You can still purchase the latest iteration of the toy, TamaTown, which lets you plug in and swap out characters for more varied play. Lime Green TamaTown, $21.99 Plus: 22 Ridiculous Parenting Products.